Existing literature on all known species of Melissotarsus reveals similar habits of relying on armoured scale insects (Diaspididae) for food within the confines of tunnels chewed in healthy wood. The ants' anomalous morphology (head and legs) represents extreme adaptations (tunnelling through live wood and silk spinning) for their obligate mutualism with diaspidids. Unlike other symbiotic associations between ants and scale insects, honeydew is not the currency of exchange for Melissotarsus. Indeed, diaspidids do not produce honeydew. In addition to gaining access to underlying meristem tissue, diaspidids benefit from highly effective protection (enemies and weather) by the ants. Accordingly, they stop building their trademark shields even though they continue secreting wax and proteins as construction material. These secretions, together with exuviae and anal excretions, can provide an adequate array of nutrients for the ants (Peeters et al. 2017). In addition, workers can also feed on dead or dying diaspidids. Claims that the ants use diaspidids as 'domestic cattle' (Schneider et al. 2013) are revisited by Peeters et al. (2017).

Save for brief periods of sexual activity and colony founding by queens, Melissotarsus ants live in splendid isolation from the outside world. Accordingly they are poorly known, even though they appear widespread throughout Africa and Madagascar, with host trees belonging to over 20 families.

Silk-producing glands are present in the head of adult workers (a trait unique to this genus as well as Rhopalomastix), and silk is spun and combined with wood particles to seal cracks in tunnel walls (Fisher & Robertson 1999). Workers cannot forage outside the tunnels because the second pair of legs project upward (Delage-Darchen 1972), a novel adaptation for bracing the body while chewing (Khalife et al. 2018).

Melissotarsus sp. worker. Rare and bizarre ants from Africa that live under bark of trees. See on Sketchfab. See list of 3D images.

Melissotarsus sp. queen. Rare and bizarre ants from Africa that live under bark of trees. See on Sketchfab. See list of 3D images.

Hita Garcia, Wiesel and Fischer (2013) - The four species of this Afrotropical and Malagasy genus are rarely encountered. The Afrotropical species were revised by Bolton (1982) who also provided a good species identification key. These ants are special in several ways. They build their nests in healthy wood by tunnelling through the living tissue beneath the surface (Bolton, 1982; Fisher & Robertson, 1999; Belshaw & Bolton, 1994) and are rarely found outside of their nests, which could be the main reason for their relative scarcity in museum collections (Bolton, 1982). They live in close association with symbiotic coccids that are kept inside the nest. Adults are able to produce silk, which is used to close exit holes or to seal cracks (Fisher & Robertson, 1999).

Bolton (1982) - Myrmicine ants with moderate to conspicuous size variation in most nest samples, living under bark and in wood of live trees. Mandibles short, when unworn armed with a long finger-like apical tooth followed by two much smaller teeth and sometimes also by a minute basal denticle. With wear these gradually become an undifferentiated blunt margin. Palp formula 0,1 (weissi). Median portion of clypeus bluntly triangular in shape and somewhat raised, not projecting back between the frontal lobes. Lateral portions of clypeus simple and unmodified. Frontal lobes narrow, confluent centrally and separated only by a narrow impressed line; the anteriormost parts of the frontal lobes abut the posterior clypeal margin. Antennal scrobes absent. Frontal carinae absent. Antennae with six segments, the scapes very short (SI 39-47), the two apical segments forming a strong club. Eyes present, distinctly longer than broad and set in front of the midlength of the sides. Alitrunk short, fusiform and box-like, without dorsal sutures or impressions except in the very largest individuals where rarely a metanotal impression is shallowly present. Propodeum unarmed and rounded. Metapleural lobes absent. Lateral portions of pronotum reduced to a narrow V -shaped wedge below the level of the conspicuous mesothoracic spiracle. Anterior coxae small, much smaller than the massively developed middle and hind coxae. Propodeal spiracle round, situated low on the side of the propodeum and just behind its mid length. Metapleural gland system easily visible through the cuticle. Basitarsal segment of each leg greatly swollen, as wide as the preceding tibia, terminating apically in a circlet of small teeth on the anterior (leading) edge on the middle and hind basi tarsi. Petiole with an anterior peduncle and a small low posteriorly situated node which is broadly attached to the postpetiole; the latter broadly attached to the gaster. Dorsal alitrunk finely longitudinally costulate throughout. Elongate fine hairs present dorsally on head and body, and also present on the upper surfaces of the scapes and outer surfaces of the tibiae.

The genus most closely related to Melissotarsus is Rhopalomastix Forel, represented by three or four poorly defined species distributed throughout the Oriental and Indo-Australian zoogeographical regions and utilizing the same lifeway as Melissotarsus. Since Emery (1922a) and Wheeler (1922) produced their classifications these two small genera have always been placed together in a tribe of their own (Melissotarsini) and it is fairly certain that they represent two stages on a single adaptive line. Rhopalomastix is the more generalized of the two, Melissotarsus decidedly the more specialized, but the modifications seen in the latter are foreshadowed in the former genus. It is the accentuation of these adaptive specializations which separates the genera, as follows.

Antennae 10-segmented. Lateral portion of pronotum extensive, distinctly larger than the mesopleuron. First coxa as large as or larger than the second and third coxae. Petiole sub-sessile, with a strong ventral process. Free posterior face of petiole node long, its articulation with the postpetiole narrow. Basitarsal segment of each leg not swollen, without apical circlets of teeth. Sting long and strong.

Antennae 6-segmented. Lateral portion of pronotum very reduced, forming a V-shaped narrow wedge which is smaller than the mesopleuron. First coxa much smaller than the swollen second and third coxae. Petiole short-pedunculate, with feeble or no ventral process. Free posterior face of petiole node very short, its articulation with the postpetiole very broad. Basitarsal segment of each leg strongly swollen, with apical circlets of teeth. Sting very reduced and probably non-functional.

Bolton (1982) - This small genus, of which only four uncommon species are presently recognized, is restricted to the Malagasy region (1 species) where it is rare, and the Afrotropical region (3 species) where it is, however, very widespread. The species nest in the healthy wood of living trees, apparently tunnelling their own galleries below the surface. For this reason most collections of Melissotarsus are made more by luck than by intent as their presence in the wood is usually not detectable on the surface. Delage-Darchen (1972) has shown that the method of walking in these ants is very strange; they progress on their front and hind legs with the middle pair projecting upwards, and presumably in contact with the gallery roof. She also noted the presence of coccids inside the galleries, also discussed by Ben-Dov (1978). It seems probable that coccid secretions form a major, if not the main, item in the diet of Melissotarsus species.

Khalife et al. (2018) - Both the head and legs of Melissotarsus workers show novel skeletomuscular adaptations to increase their ability to tunnel through living wood. The head is greatly enlarged dorsoventrally, with large mandibular closer muscles occupying most of the dorsal half of the head cavity, while ventrally-located opener muscles are also exceptionally large. This differs from the strong closing: opening asymmetry typical of most mandibulated animals, where closing the mandibles requires more force than opening. Furthermore, the mandibles are short and cone-shaped with a wide articulatory base that concentrates the force generated by the muscles towards the tips. The increased distance between the axis of mandibular rotation and the points of muscle insertion provides a mechanical advantage that amplifies the force from the closer and opener muscles. We suggest that the uncommonly strong opening action is required to move away crushed plant tissues during tunnelling and allow a steady forward motion. X-ray spectrometry showed that the tip of the mandibles is reinforced with zinc. Workers in this genus have aberrant legs, including mid- and hindlegs with hypertrophied coxae and stout basitarsi equipped with peg-like setae, and midleg femura pointed upward and close to the body. This unusual design famously prevents them from standing and walking on a normal two-dimensional surface. We reinterpret these unique traits as modifications to brace the body during tunnelling rather than locomotion per se.

The sister genus Rhopalomastix was found to have a similar ecological niche, although mid- and hindlegs are not as highly specialised (Yong et al. 2019). 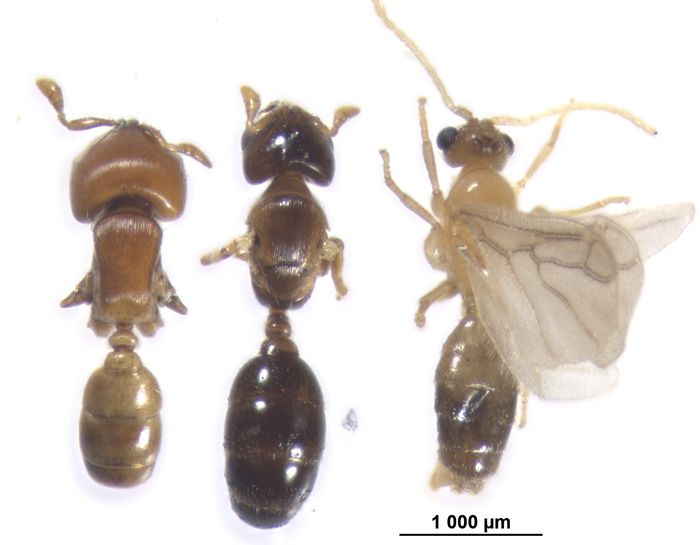 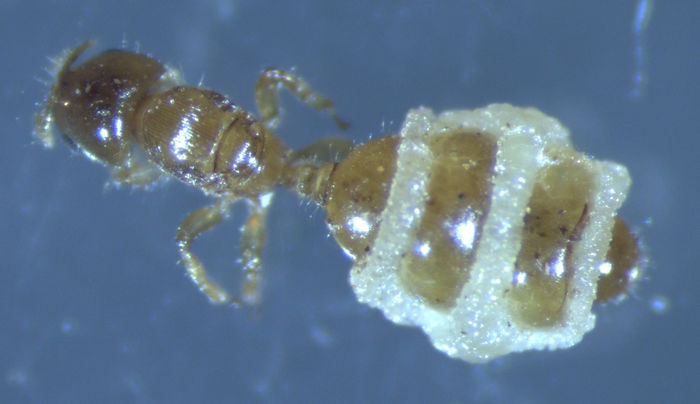