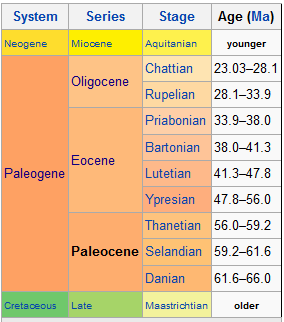 The Paleogene is a geologic period and system that spans 43 million years from the end of the Cretaceous Period 66 million years ago (Mya) to the beginning of the Neogene Period 23.03 Mya.

This period consists of the Paleocene, Eocene, and Oligocene epochs. The end of the Paleocene (55.5/54.8 Mya) was marked by the Paleocene–Eocene Thermal Maximum, one of the most significant periods of global change during the Cenozoic, which upset oceanic and atmospheric circulation and led to the extinction of numerous deep-sea benthic foraminifera and on land, a major turnover in mammals. The term 'Paleogene System' is applied to the rocks deposited during the 'Paleogene Period'.

Ant Genera Known from the Paleocene

Ant Species Known from the Paleocene