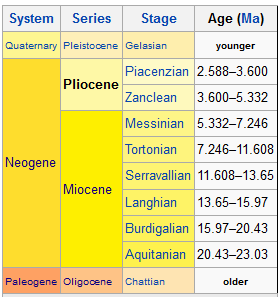 The Miocene is the first geological epoch of the Neogene Period and extends from about 23.03 to 5.333 million years ago (Ma). The Miocene is preceded by the Oligocene and is followed by the Pliocene.

As the earth went from the Oligocene through the Miocene and into the Pliocene, the climate slowly cooled towards a series of ice ages. The Miocene boundaries are not marked by a single distinct global event but consist rather of regionally defined boundaries between the warmer Oligocene and the cooler Pliocene Epoch.

The Miocene is of particular interest to geologists and palaeoclimatologists as major phases of the geology of the Himalaya occurred during the Miocene, affecting monsoonal patterns in Asia, which were interlinked with glacial periods in the northern hemisphere.

Ant Genera Known from the Miocene

Ant Species Known from the Miocene