The only species in the genus, Pilotrochus besmerus, is found in forest habitats in eastern Madagascar. It has typically been collected from litter samples and details about its biology are unknown.

Brown (1960) - The relationships of Pilotrochus are obscure. The shape of the head, with its broad and deep scrobes and small ventrolateral eyes, recalls that of Dacetinops, or the Codiomyrmex group of Dacetini, or even Tatuidris, but Pilotrochus differs strongly from all of these in its 8-segmented antennae, in the form of its mandibles and their teeth, and in the form of its trunk and petiole. The lateral "hair wheel" organs are also striking, and so far as I am aware are unmatched among the ants, although the region of the ventral furrow between pro- and mesothorax is sometimes modified and apparently glandular in some dacetines and a few other myrmicines.

The 2-segmented antennal club, together with some points of habitus (especially coarse sculpture and long, flexuous pilosity, plus the antennal scrobes), recalls the neotropical genus Lachnomyrmex, but the shape of the trunk in Pilotrochus is completely different, the propodeal teeth so prominent in Lachnomyrmex are completely absent, and the mandibles in the two genera are very different.

Queens and males have been collected but have yet to be described. 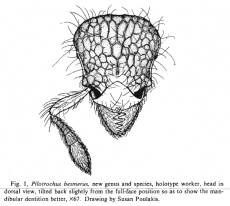 Mandibles triangular, convex, with opposable, serially-toothed mesial margins (teeth coarse, sharp, 7 in number on each mandible); these margins arcuate in side view and finally directed ventrad at apex. In the vee between each of the larger teeth is a minute piligerous denticle. Labrum thick, linguiform and narrowly rounded at apex, but appearing truncate in side view; its dorsal surface bearing a narrow pencil of fine white setae that arches forward to extend beyond the mandibular apices, probably serving as a "rangefinder" trigger hair. Palpi not visible and undoubtedly short, but segmentation not determined.

Trunk compact, its dorsal outline forming one continuous arc from base of pronotal cervix to petiolar insertion, dominated by pronotum, which makes up about half its length and is wider than the rest (a little more than half as wide as head). Promesonotal suture marked by a faint curved transverse line paralleled by a costa on the dorsum, but completely fused here, though complete on the pleura. Pronotum with blunt, barely suggested humeral angles as seen from above, but not distinctly marginate in front or on the sides; upper sides bulging and overhanging lower sides; ventral margins each forming a curved, cultrate, projecting flange or lamella. Metanotal groove obsolete, its position perhaps marked by a transverse carina at the top of what appears to be the propodeal declivity, but the true declivity probably is confined to the lower part of this slope, beneath a lower and weaker transverse carina or costula. 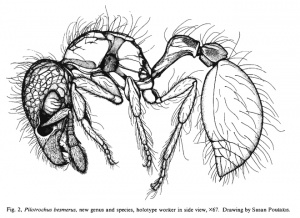 Mesopleura narrow and impressed, but their lower central parts (mesepisterna) are occupied on each side by a peculiar organ consisting of a large subcircular pit filled with a silvery-white, convex pad of fine, radially-arranged hairs. The anterior edge of this structure forms the posterior side of the ventral invagination between pro- and mesonotum, but a broad piece of mesokatepisternal cuticle separates the organ from the mesocoxa. This organ appears to be the external part of an exocrine gland or glands, though the gland openings, if any, are hidden by the pad of fine hairs.

The (probably) true propodeal declivity small, flat, steep, unarmed, bounded by an inverted U-shaped carina, flanked on each side by the large, circular openings of the propodeal spiracles, which are directed caudad. Inferior propodeal plates low and rounded.

Petiole curved-clavate, with a long, subcylindrical anterior peduncle, a long, low, rounded node, and poorly-defined posterior peduncle, or collar. Postpetiole rounded above and on the sides, broader behind than in front, and about as broad as long; sternum boxlike, with inwardly sloping sides and a flat, subrectangular ventral face limited on all 4 sides by sharp carinae; broadly attached to gaster behind, but with a moderate constriction between the 2 tagmata.

Gaster rounded at base to the basal constriction, which has a few short longitudinal costulae hidden within it. Basal segment extending over about 2/3 length of gaster, the remaining 3 visible segments curving to a pointed apex; terminal external (seventh) sternite (hypopygium) acutely pointed; sting with acute tip exserted, some of the rest of the shaft visible through transparent cuticle.

Sculpture mostly shining; head both above and below (except clypeus and antennal scrobes) covered with a coarse reticulum of costulae forming large, shallow-polygonal fossae, each of which bears a long, fine, curved hair arising from an inconspicuous puncture, usually near the margin of the fossa. Similar sculpture on truncal dorsum, though here 10-11 longitudinal costae predominate. A broad median strip is nearly smooth, forming a very shallow median sulcus, which has a modest costa or carina in the middle. (The median posterior vertex is feebly subsulcate in much the same way.) Propodeum (sloping dorsum and declivity) nearly or quite smooth. Sides of trunk smooth and shining, but the posterior half with 5 strong costae radiating outward from the mesopleural organ. Petiolar and postpetiolar nodes loosely longitudinally rugose, with broad, shining interspaces; peduncles and sides of these segments becoming finely and densely punctate-reticulate and more opaque; ventral rectangle of postpetiole smooth and shining. Gaster smooth and shining, except posterolateral margins of segments, which are delicately reticulate-striolate, but still shining. Mandibles densely and finely punctulate, opaque (teeth infuscate and shining), lateral surfaces finely longitudinally costulate basad. Antennal scapes and legs shining, finely longitudinally rugulose to smooth; antennal funiculi densely punctulate, pubescent and opaque. Antennal scrobes basically smooth and shining, but each is crossed by 7-9 vermiculate transverse rugulae.

Pilosity consisting of long, fine, flexuous erect to decumbent hairs distributed widely over dorsal surfaces of body, and on scapes and legs, sparser on underside of head and gaster. Mandibles, antennal funiculi, and flexor surfaces of tibiae and tarsi with fine, appressed to decumbent pubescence.

Baroni Urbani & De Andrade (2007) - The sole known apomorphy for this genus is the hypertrophic development of the mesosternal hair beds, visible on the profile, CI 1.00, RI 0.00. Mesosternal hair beds are widespread in ants. Whether the hypertrophic development visible in Pilotrochus should be considered as a genus-level apomorphy or not may be debated. This doubt, together with the clustering of the three "Phalacromyrmecini" genera that we have shown are based on doubtful characters weakens considerably the credibility of Pilotrochus as a valid monotypic genus. We suspect that all the former Phalacromyrmecini genera might be better understood as atypical Strumigenys species.

The generic name is derived from the Greek 'pilos' (hair) + 'trochos' (wheel).