Feitosa and Brandao (2008): Lachnomyrmex are most often encountered in the leaf litter of submontane wet forests. Despite our poor knowledge of the biology of the cryptobiotic Lachnomyrmex species, field observations allied to information recorded in museum specimen labels provide a first glimpse of the natural history of the genus. Nests are found in the ground, among rotten leaves, and inside fallen logs. Workers generally forage alone on the ground or in the low vegetation; apparently they do not recruit nestmates or form pheromone trails.

Within its Neotropical range Lachnomyrmex can be easily distinguished from the other genera by its diagnostic characters.

Feitosa and Brandão (2008) - Lachnomyrmex is endemic to the Neotropics, ranging from southern Mexico, east into the Caribbean (Trinidad), and south to northern Argentina. Despite a few records of Lachnomyrmex in lowland forests of the Amazon Basin and other lowland localities, these ants apparently reach their peak of abundance and diversity in the submontane wet forests (500–2000m) of northern South America and southern Central America, where 12 of the 16 known species occur. Lachnomyrmex ants are also commonly encountered in scattered submontane localities along the Brazilian Atlantic Forest. The preference for submontane forests is shared with species of the related Central American stenammine genus Stenamma and may suggest that workers are tolerant to relative low temperature and wet conditions (Longino 2007). Intensive surveys in Central and Southeastern Brazil savannas failed to record any Lachnomyrmex representatives (Silva et al. 2004).

Feitosa and Brandao (2008): Very little is known about the biology of these cryptic ants. Workers are frequently found in leaf litter and soil samples submitted to Winkler or Berlese extractors, but are never especially abundant within samples. When a dealate gyne is found associated with workers in 1m2 samples of leaf litter, normally it is found singly, which suggests that colonies are relatively small and apparently monogynic; workers and nests are extremely difficult to spot in the field, because the workers are very slow moving and well camouflaged; if there is any leaf-litter nest structure, it is destroyed during sifting, but our impression is that they do not construct any permanent nidal structure. Species of Lachnomyrmex apparently nest within the leaf litter, inside natural cavities of the superficial soil layers, fallen logs, and rotten wood, as evidenced by the large number of soil-covered individuals collected, from information recorded in specimen label data, and from observations of collectors. Workers forage alone, in the leaf litter and in the low vegetation, occasionally among epiphytes and moss, probably preying on small soft-bodied arthropods and possibly harvesting plant exudates.

Petiole with an elongate anterior peduncle, eventually with a discrete anteroventral denticle; petiolar node normally well developed. Postpetiole usually broader than long in dorsal view, without a well developed node and presenting a subpetiolar process in some species. Gaster globose to slightly elongate, without anterior shoulders. 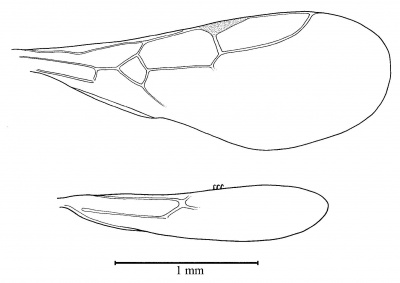