These rare ants nest and forage arboreally and little is known about their biology. The few nests which have been found were in twigs.

Mandible short-triangular, the masticatory margin with 5 teeth, uniquely arranged. The large apical tooth is followed by two smaller teeth (third smaller than second), then a long diastema and two small basal teeth. Length of diastema is at least equal to length of margin occupied by the apical group of three teeth. This dentition is autapomorphic and unique in the Myrmicinae. This character alone will instantly diagnose Vombisidris and separate it from all other genera in the subfamily.

The sides of the head behind the eyes have an elongate ridge or groove on each side which starts at the mandibles, runs the length of the head and ends near the upper corners, and touches the lower surface of the eye. In side view, the petiole has a distinct, arched node on its upper surface. This distinctive ridge/groove on the sides of the head behind the eyes combined with the high, arching petiolar node is also diagnostic and will separate these ants from all other ant genera.

Hosoishi et al. (2015) collected colonies of Vombisidris sp. by nest sampling in a regrowth forest in Kampong Thom Province, Cambodia. In his revision of the genus, Bolton (1991) listed 12 species and provided a key to the species with descriptions. His collections did not include any Indochinese specimens. The specimens collected in this study were assigned to the Vombisidris philax group based on the following features: subocular groove complete; legs and antennae relatively long; propodeal spines long and downcurved; metanotal groove absent. Our specimens are similar to V. nahet (head width 0.66–0.68 mm, n = 2), but the body is relatively smaller (head width 0.50–0.55 mm, n = 4). 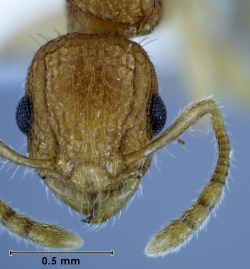 Worker of V. renateae from Queensland.

Diagnosis of worker. Monomorphic terrestrial to arboreal myrmicine ants with the following combination of characters.

2. Mandible short-triangular, the masticatory margin with 5 teeth, uniquely arranged. The large apical tooth is followed by two smaller teeth (third smaller than second), then a long diastema and two small basal teeth. Length of diastema is at least equal to length of margin occupied by the apical group of three teeth.

3. Anterior clypeal margin lacking an isolated median seta; instead with a pair of setae that straddle the midpoint.

5. Frontal lobes narrow, each lobe distinctly narrower than the portion of the clypeus which is inserted between them.

8. Eyes of moderate size, at or slightly in front of the midlength of the sides of the head.

12. Propodeal spiracle high on side, at about midlength of sclerite. distinctly separated from the small metapleural gland bulla.

16. Petiole pedunculate. the spiracle located from very close to the ali trunk articulation to just behind the midlength of the peduncle.

Female - As worker but with ocelli and full complement of flight sclerites; winged when virgin. Females known only in Vombisidris bilongrudi, Vombisidris renateae, and Vombisidris australis, see Taylor (1989).