A small well defined genus of Oriental and Indo-Australian ants.

Rigato (1994) - Lophomyrmex workers are small, slender, yellowish or brownish ants; both workers and females are easily identifiable by means of the presence of the following autapomorphies: (a) mandibles armed with an apical and one pre apical tooth, followed, on both masticatory and basal margin, by an uninterrupted series of blunt, irregular denticles; (b) anterior clypeal margin with a median anteriorly protruding point. Further, workers have the pronotum either with dorsolateral, irregular, sharp borders or with anterolaterally directed dorsal teeth, which can also be interpreted as an autapomorphic trait.

The genus is divided in two equally-sized groups: the quadrispinosus-group (birmanus, kali, opaciceps, quadrispinosus and taivanae), whose species have two anterodorsal pronotal teeth, and the bedoti-group (ambiguus, bedoti, longicornis, lucidus and striatulus), where the pronotum is sharply and irregularly dorsolaterally marginated. Besides this major diagnostic character, Lophomyrmex seems rather constant in all the other features. 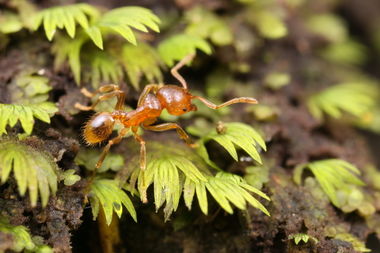 Rigato (1994) - Lophomyrmex species are common ground dwellers and surface scavengers in secondary forest. Moffett (1986) briefly surveyed the foraging behavior of L. bedoti and L. opaciceps in Malaysia and Indonesia. Nests of Lophomyrmex are usually located near the base of trees and seem moderately populous. Lophomyrmex workers forage following narrow trunk trails from which they depart singly to collect food. The more persistent pathways are surrounded by walls built with soil or sand particles; sometimes the trails are wholly subterranean and undetectable. The diet is heterogeneous and includes many kinds of dead and living invertebrates: isopods, arachnids, termites, cockroaches, flies, larvae of various insect groups, as well as other ants. Moreover Lophomyrmex workers are enticed by sugar baits and vegetable oil, but not at all by seeds. The peculiar mandibular dentition of Lophomyrmex appears well suited for cutting both prey and the limbs of foreign ants; Lophomyrmex are well adapted for hunting other invertebrates notwithstanding their reduced sting.

Monomorphic, terrestrial myrmicine ants, with the following combination of characters.

(2) Mandibles with the following dentition: masticatory margin with apical and one preapical tooth, followed by an enlarged denticle; these then followed by a continuous series of irregular small denticles, usually with a larger one at about the midlength of the row; basal margin always finely serrated, continuing the denticulation of the masticatory margin.

(3) Clypeus vaulted in the middle, with a protruding blunt tooth at the midpoint of its anterior margin. At each side of this tooth there is a strong seta, anteriorly directed and slightly curved downward. The clypeus is posteriorly broadly inserted between the frontal lobes (wider than a single lobe at this point).

(5) Antenna ll-segmented with a distinct 3-segmented club, which is longer than the rest of the funiculus.

(6) Eyes at about the midlength of the head in full-face view; oval in profile, with a slight antero-ventral point.

(7) Pronotum domed in profile, with the dorsum quite flattened and the humerus bearing a single erect hair. In dorsal view the sides of the upper face may be either irregularly marginate or armed anteriorly with a horizontal flat tooth or spine formed by a lateral and an anterior edge. When present the teeth are outward and forward-directed.

(8) Promesonotal suture vestigial. Mesonotum in lateral view gradually sloping toward the propodeum, it bears around its midlength a prominence, sometimes very low.

(12) Propodeal spiracle in side view circular and located near the base of the spine.

(15) Posterior portion of the metasternum closed, membraneous ligament at the articulation of the petiole not visible.

(16) Tibial spur of middle and hind legs present and simple, not clearly visible.

(17) Petiole with a distinct, fairly long, peduncle, and with a high node which is not triangular in shape in profile.

(18) Petiolar spiracle placed at the midlength of the peduncle.

(19) Postpetiole wider and usually slightly higher than the petiole: the tergite much more developed than the sternite.

(20) First gastral tergite large, but ventrally not extensively overlapping the sternite. Anterior corners of the gaster, at the sides of the postpetiolar insertion, obtuse, not protruding anteriorly.

(23) Long erect hairs present throughout the body excluding the dorsum of the propodeum. Pubescence and oblique tiny hairs sparse on the body; appendages with abundant, long, subdecumbent to oblique pubescence. Eyes covered with very small erect hairs, usually hooked at their tip.

Much larger, darker and more sculptured than the worker; mandibles, clypeus and antenna as in the worker. The other characters as follows:

(3) Eyes at the midlength of the head in full-face view.

(4) Ocelli well developed, separated from one another by a distance more than their maximum diameter (quadrispinosus, bedoti, lucidus) or approximately equal to it (unassociated female).

(5) Alitrunk much longer than wide. Scutum covering the pronotum in dorsal view. Parapsidal furrows weak. Axillae well separated, but linked by a strip that may be either thin or quite broad. Metanotum visible from above. Propodeum bidentate or bispinose.

(6) Propodeal spiracle approximately elliptical or circular; in lateral view its opening is posteriorly directed and sometimes slightly ventrally directed. The spiracle is anteriorly placed: a little above the midheight of the propodeum and much nearer the anterior suture than the posterior propodeal surface.

(7) Petiole pedunculate with the node triangular and rounded in profile. A weak anterior subpetiolar prominence present.

(8) Postpetiole massive. wider than the petiole in dorsal view and broadly articulated to the gaster.

(11) Pubescence abundant and dense all over the body and the appendages, usually decumbent to subdecumbent. Erect hairs sparse on the dorsum of the body and on the ventral surface of the head. Eyes covered with dense hairs as in the worker.

(12) Forewings with one cubital cell and m-cu vein; not hyaline: either uniformly infuscated (quadrispinosus, bedoti) or weakly yellowish throughout (lucidus).

(2) Head (including the eyes) wider than long.

(3) Mandibles moderately developed, but not touching each other when fully closed; armed with a single apical tooth, which may be sometimes worn out (quadrispinosus, bedoti) or serrated on its masticatory and basal margin (lucidus). The angle between the margins is widely rounded.

(4) Clypeus vaulted in the middle, very poorly angled at the midpoint of the anterior border.

(8) Eyes at the midlength of the head sides in full-face view, well separated from the mandibular insertion and from the occipital head surface.

(9) Ocelli not surmounting a turret and separated from one another by much more than their diameter.

(10) Alitrunk elongated. Scutum well above the pronotum, without notauli and with weak but distinct parapsidal furrows. Axillae small and well separated, linked by a very narrow strip (quadrispinosus) or a quite wide one (bedoti and lucidus). Metanotum visible from above. Propodeum bidentate or weakly bituberculate.

(11) Propodeal spiracle as in the female.

(13) Postpetiole in dorsal view much wider than the petiole. thick and broadly attached to the gaster. The tergite much more developed than the sternite.

Head well sculptured and opaque, only the centre of the clypeus smooth and shining. Alitrunk not as sculptured as the head. only the propodeum fully opaque. Middle of the scutum slightly shining, scutellum fairly smooth in the middle. Petiole and post petiole dull, mostly reticulate. Gaster smooth.

(15) Colour from brownish yellow (bedoti and lucidus) to dark brown.

(16) Pubescence long and rich throughout the body. Pilosity as in the female. Eyes covered with dense, very short erect hairs.