Ants generally have two female castes (workers, queens) in addition to males. While females are diploid (hatched from fertilized eggs, hence two sets of chromosomes), males are haploid (hatched from unfertilized eggs, hence just one set of chromosomes from the mother). This haplodiploidy is characteristic of all Hymenoptera (thus males do not have a father!).

According to a morphological definition of castes, any alate or dealate (after mating) female with fully segmented flight thorax, regardless of its reproductive status. According to a functional definition of castes, any mated and egg-laying female of an ant colony. Ants can show huge divergence in body size between winged queens and wingless workers, and this is not the case in social wasps and bees (Peeters & Ito 2015).

Queens that emerge as adults without wings. As a result of the lack of wing muscles, the thorax is reduced (fusion of flight sclerites) and worker-like. However, reproductive organs are fully functional and allow sexual reproduction. Known from at least 49 genera (see current list of species). Can co-occur with winged queens in species where independent colony foundation alternates with colony fission (see Life History).

Ergatoid queens can be placed in two categories:

The special form of ergatoid queen peculiar to army ants, with a very large gaster to accommodate massive egg production. Winged queens do not exist in army ants.

Queens that emerge as adults with short non-functional wings. The thorax of brachypterous queens retains unfused flight sclerites (unlike ergatoid queens), and it is thus very distinct from that of conspecific workers. The short wings are often broken within hours of emergence, with wing stubs remaining, giving the impression of a queen capable of flying. Known from at least 15 genera (Peeters 2012). See current list of species

Both winged and ergatoid queens co-occur in various species (e.g. Chelaner leae, Technomyrmex brunneus ), though not necessarily within one colony. Queen polymorphism is claimed to have a genetic basis in Harpagoxenus sublaevis and Myrmecina graminicola.

Mating sequence in Myrmecina graminicola. Both winged and ergatoid queens attract males by emitting a sexual pheromone (secreted from the poison gland) onto the substratum or into the air. Males are attracted and search around until they find the gyne. After mating the wings are broken off and the queen founds a colony.

Form or Function in Queens

This split in usage (form or function) can lead to ambiguity in the literature, with different uses of the terms "caste" or "queen". The existence of permanently wingless reproductives ("ergatoid queens" and mated egg-laying workers) also causes confusion in terminology due to the uncoupling of 'flight' and 'reproduction' (Peeters 2019). Polymorphism of female reproductives in ants has been reviewed by Heinze (1998) and Peeters (2012).

Many species have a monomorphic worker caste, with all individuals approximately the same body size and shape. Other species have polymorphic workers that show more or less continuous variation in body size. These can be divided into a number of subcastes based on distinct size differences. Individuals at the extreme ends of the range of size variation can have differently shaped body parts (= allometry) (see Crematogaster clariventris for an example). Dimorphic species have two distinct size classes, either called "minor" and "major", or "worker" and "soldier".

Wilson (1953b) described five major steps in the evolution of the worker caste:

(1) Monomorphism. The workers of the normal mature colony display isometry (with a log-log curve slope of approximately 1.0) and very limited size variability. A plot of their size-frequency distribution is symmetrical and has only a single mode. In other words, the properties of variation are not basically different from those in a typical random collection for nonsocial insects. The worker castes of most ant genera and species are monomorphic. Also, within the majority of genera and higher taxonomic groups monomorphism is evidently the primitive state.

(2) Monophasic allometry. The relative growth is nonisometric, meaning that the allometric constant a is greater or less than unity to a subjectively noticeable degree. In the most elementary form of monophasic allometry, and hence of worker polymorphism generally, feeble nonisometric variation is displayed over a short span of size variation; this variation in turn is grouped around a single mode with possible skewing in the direction of the major caste. A more advanced stage, involving an increased variation in size together with an apparent bimodal size-frequency distribution, is exemplified by the fire ant Solenopsis invicta. The two modal groups are still overlapping, and hence the majors and minors are connected by intermediate-sized workers, or “medias.”

(3) Diphasic allometry. The allometric regression line, when plotted on a double logarithmic scale “breaks” and consists of two segments of different slopes that meet at an intermediate point. In the several species known to possess this condition, including the leafcutter ant Atta texana (Wilson, 1953), African driver ant Dorylus nigricans (Hollingsworth, 1960), and carpenter ant Camponotus sericeiventris (Busher et al., 1985), the size-frequency curve is bimodal. Also, the saddle between the two frequency modes falls just above the bend in the allometry curve. Diphasic allometry permits the stabilization of the body form in the small caste while providing for the production of a markedly divergent major caste by means of a relatively small increase in size. The lower segment of the relative growth curve is nearly isometric, so that individuals falling within a large segment of the size range are nearly uniform in structure; but the upper segment leading to the major caste is strongly nonisometric, with the result that a modest increase in size yields a new morphological type.

(4) Triphasic and tetraphasic allometry. The allometric line breaks at two points and consists of three straight segments. The two terminal segments, representing the minor and major castes respectively, deviate only slightly from isometry while the middle segment, encompassing the media caste, has a very steep slope. The effect of triphasic allometry is the stabilization of body proportions in the minor and major castes. An example is the weaver ant genus Oecophylla. Baroni Urbani (1976b) has reported a case of tetraphasic allometry in the antennal length of the West African ant Camponotus maculatus. The curve resembles that of triphasic species except that in the largest size classes a high degree of allometry is resumed. The biological significance of this extreme pattern is wholly unknown.

(5) Complete dimorphism. Two morphologically very distinct size groups exist, separated by a gap in which no intermediates occur. Each class is either isometric or non-isometric, but the allometric regression curves are not aligned, a condition suggesting that complete dimorphism can arise directly from triphasic allometry. Examples include most queen-worker differences in ants. They also include minor-major divisions in no fewer than nine phylogenetically scattered genera: the myrmicines Acanthomyrmex, some Carebara (the old Oligomyrmex species), Pheidole, and some Cephalotes (the old Zacryptocerus species); the aneuretine Aneuretus; a few species of the dolichoderine Tapinoma (Zatapinoma); and the formicines Camponotus (subgenus Tanaemyrmex), Colobopsis and Pseudolasius.

These are the largest-sized infertile individuals in a colony. The terms "major" and "soldier" are used interchangeably in the literature. However, polymorphic workers (same growth rules but small and large individuals differ in shape due to allometry) are distinct from soldiers having morphological traits absent in workers. In Cataglyphis bombycina and various Colobopsis, workers vary extensively in body size, but the majors are morphologically distinct from the soldier caste.

Characterised by physical traits absent in (minor) workers. Molet et al. (2012) showed that soldiers are a mosaic of queen-like and worker-like traits, and can be considered as a third caste, not a sub-caste of workers (Peeters 2019). See also Baroni-Urbani (1998). Heads are usually enlarged because of powerful mandible muscles, and mandibles can have specialised shapes (for seed-milling, wood-boring, or defence). In various unrelated genera, the head is modified to be door-shaped (phragmosis) (e.g. Carebara, Cephalotes, Colobopsis). The prothorax is enlarged in many species due to larger neck muscles needed to carry heavy heads. Two sizes of soldiers are known in Gesomyrmex and Pheidole obtusospinosa.

In some genera (e.g. Acanthomyrmex ferox, Crematogaster pygmaea), soldiers have queen-like ovaries that allow a higher production of trophic eggs. The gaster is larger than workers' and this allows soldiers to be efficient repletes (e.g. Carebara jajoby, Colobopsis nipponica, Pheidole desertorum).

Workers that perform the task of colony defence. The entire emphasis is on adaptive function (i.e. ultimate causes of evolution), regardless of developmental mechanisms. Includes major workers/soldiers that show distinct shapes resulting from allometry within worker growth rules.

A challenge in the use of the functional definition is that workers with the same morphology can show defensive behaviours in some species (logically should be called "soldier") while in other species similar workers specialise in crushing seeds or storing food in the gaster.

Workers or soldiers whose crop is greatly distended with liquid food and functioning as living reservoirs; this food is shared with other colony members by regurgitation (trophallaxis). Another mechanism of food transfer within colonies is the production of non-viable trophic eggs by workers and soldiers.

Phragmosis is a defensive technique that involves specially modified body structures used to block nest entrances. The most common form is the flattening of the upper surface of the head of a worker, which is then used to block entrances to prevent intruders from entering nests or to push intruders out of entrance galleries. In a few rare cases other parts of the body parts may be involved, such as the gaster of the queen in Proceratium melinum. 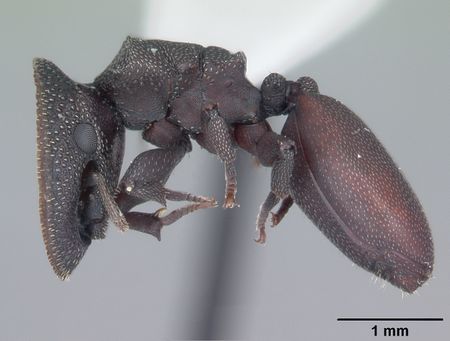 Mated, egg-laying workers that reproduce sexually, like the queen caste (Peeters 1991). In about 1% of species, across several ant subfamilies, all workers in a colony can mate and store sperm in the spermatheca (see list of species). Dominance interactions regulate which individual(s) can mate and lay eggs.

Developmental anomalies that are morphologically intermediate between winged queens and workers. Infrequently reared in colonies, and poorly studied. Intercastes are conspicuous in ants because of the divergence winged/wingless, and also because queen-worker dimorphism in body size is often pronounced (Peeters 2019). In species where large samples of intercastes were examined, e.g. Temnothorax nylanderi, there is considerable heterogeneity in morphology (ocelli, thorax segmentation, gaster size). Reproductive organs (ovaries and spermatheca) may or may not be functional. 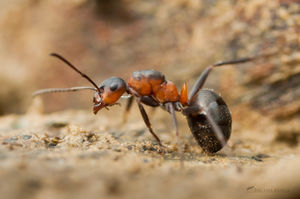 An intercaste of Formica sp. Photo by Michal Kukla.

The Formica intercaste here depicted is probably a pseudogyne (= secretergate). Such workers with vaulted mesosoma and partially gyne morphology are caused by a virus infection of the labial glands, the „labial gland disease“. Usually they have the size of workers and thus are smaller than true gynes. They are quite frequent in Formica, and particularly in Formica sanguinea. https://www.ameisenwiki.de/index.php/Pseudogynen_/_Secretergate_/_Viren (with pictures).

This table summarises terms used to describe female ants, both winged and wingless, reproductive and sterile. Note that terms referring to winged/dealate reproductive females vary across researchers, with the same term having different meanings in different studies.

The vast majority of species have fully-winged males. Ant males are optimized for flight and are highly effective agents of dispersal (reviewed in Hakala et al. 2019).

A very small number of ant species have wingless or short-winged males. Consequent to the lack of wing muscles, the thorax is reduced in volume and sclerites fuse in some species. Hence “ergatoid” (worker-like) is appropriate to describe such males. However, in other species, wingless males retain flight sclerites