The typical ant nest begins with a single individual, the queen. This queen flew from her home nest a day or two earlier, together with other queens and males from her nest and other nests in the area. The queen searches for a mate, often being attracted to large, distinctive objects such as especially tall trees, large shrubs or hill tops. These sites act as meeting places for queens and males from many nests, ensuring that they can find each other. The queen then mates with one or a few males while still in the air or on low vegetation or the ground. Once mated, she searches for a suitable nest site. Where she searches will vary with the species and can range from the tops of trees to open soil. (For details see Nuptial Flights and Mating.) 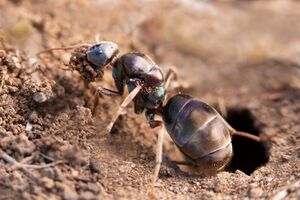 Iridomyrmex purpureus dealate queen, just after her nuptual flight, constructing a nest founding chamber. Once complete, the queen will enter the chamber, seal the entrance, lay her first batch of eggs, and patiently tend to them until they hatch. She will not feed until her daughters emerge as adult workers and start foraging. Brimbank Park, Melbourne, Victoria, Australia. Photo by Jordan Dean. 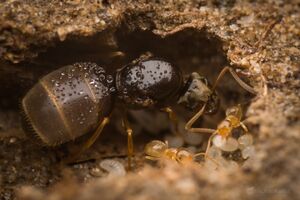 Either during her search or once a suitable site is found she bites off her wings as they are no longer needed. She then seals herself into a small chamber or other secluded place and lays a small batch of eggs. The queen remains in the nest with her brood while it develops, feeding the growing larvae special trophic (unfertilised) eggs which she lays specifically as food for them. These first workers (called nanitics) are often much smaller than subsequent workers as the queen can only provide a limited amount of food compared to that which foraging workers can provide. Once these initial workers mature, they leave the nest and begin to forage, returning captured prey to the queen and her additional brood. (For details see Colony Foundation.)

The colony grows as more workers mature, these new workers taking over the care of brood as well as bringing in additional food. At this stage, the queen reduces her activities to egg laying and the workers assume all other tasks in the nest. The queen is still essential for normal colony life, however, as the chemical messages she produces controls the activities of all workers in the nest.

The above pattern of nest founding is one of the most common and widespread, however many species vary from it. For example, in some Rhytidoponera mating may take place on or in existing nests. It is also common for several queens to establish a nest together and then either live together or later fight among themselves to determine which queen remains in the nest, the others being forced out or killed (for example, in Oecophylla). In other species, new colonies are established when a new queen leaves an existing nest together with a number of workers and relocates to a new location some distance away (as in Aenictus).

Queens may forage outside the nest before the first workers emerge (in Nothomyrmecia). They may remain in their parental nests or form small satellite nests which share workers with the main nest (Oecophylla) and some Iridomyrmex). In others, brood may be removed from the main nest and placed in small groups together with a few workers near food sources (Amblyopone). The specific details of nest founding is as varied as the ants themselves.

As the colony reaches maturity, it begins to produce the queens and males (called alates) which will form the next generation. Numerous factors determine when queens are produced, including the time of year, the food available to the growing larvae, the size and contents of the egg laid, pheromones or hormones produced by the queen and the age of the queen. The production of males has a much simpler controlling mechanism. As it turns out, females (queens and workers) are diploid. That is, they have two copies of each chromosome. Males, on the other hand, are haploid and have only a single copy of each chromosome. Because of this, fertilised eggs, where an egg and sperm combine, form females while unfertilised eggs develop into males. These factors combine to give the colony a high degree of control over when queens and males are produced, as well as the relative numbers of each.

The larvae of these new queens and males are similar to the larvae of workers but are generally larger. Once they emerge, they remain in the nest waiting for environmental triggers to initiate their leaving the nest. These same triggers will cause the simultaneous release of queens and males from the vast majority of nests of a given species in a given area. Because of this, huge numbers of queens and males can be released on the same day, sometimes over hundreds of kilometres. In open country with scattered shrubs, large numbers of flying ants can be seen hovering over each shrub over wide areas. These mass emergences last only a few days, with the queens mating and attempting to establish new nests while the males generally die within several days of leaving their nests.

Once established, individual nests can last many years. Queens of the common "sugar ant" of south-eastern Australia, Camponotus consobrinus, have been known to live as long as 23 years in captivity although they are likely to be more short-lived in nature. In some species, established colonies will produce or accept new queens if the existing queen dies. Other species add additional queens as the colony grows. In these species, nests can potentially last indefinitely as new queens replace older queens, thus ensuring the constant production of new workers. Individual workers generally live a few years but detailed studies are few. Males can remain in nests for some months and in some species they will over winter. However, most will die within a few days of leaving their nests.