Brandao et al. (2001) provide this excellent introduction to this topic: The term phragmosis was coined by W.M. Wheeler (1927), to describe a cryptic defensive technique employed by insects that use specially modified body structures to block nest entrances. Phragmotic-headed ants, for instance, prevent intruders from entering nests by blocking the entrances or by pushing them out of entrance galleries.

Shield-like-headed soldiers and queens of the Neotropical myrmicine Cephalotes species of the pallens group appear to secrete a fibrous material from thousands of pores that resemble glandular openings, coating and eventually accumulating in a dense tangle of material over the head disk. This material is superficially similar to a mass of fungal filaments (mycelia), but does not have the branching pattern or internal structure indicative of a fungal origin (de Andrade and Baroni Urbani, 1999). In other ant genera, phragmotic structures develop through the accretion of environmental debris held by specialised hairs. These and other structural modifications related to phragmosis in ants have been discussed in detail by Wheeler and Hölldobler (1985).

Reversed phragmosis was described for the queen of Pheidole embolopyx, which has a peculiar posteriorly truncated gaster with a rear surface covered with unusual hookshaped hairs (Brown, 1967). Furthermore, the queen’s antennal scapes, anterior clypeal border, and frontal carinae are covered by gelatinous sheaths, varying in size and shape among individuals and on the same queen over time, and often absent altogether. Contrary to expectation, Wilson and Hölldobler (1985) show that P. embolopyx queens do not use the gaster to block nest entrances or otherwise to repel intruders directly, nor do the gelatinous structures seem to be especially attractive or repellent to the workers. Poldi (1963, apud Hölldobler and Wilson, 1990) described how the queen of the ponerine Proceratium melinum Roger plugs the nest entrance with her rounded first gastral segments. 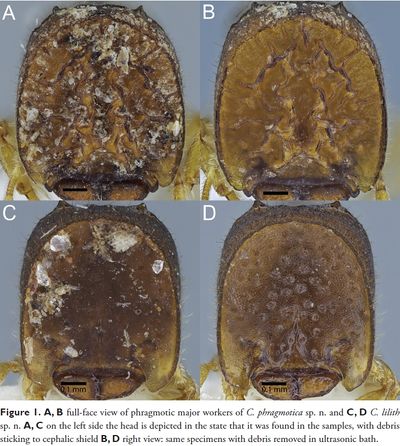 Fischer et al. (2015) - Phragmosis in ants (truncated body parts – usually the head – used for plugging nest entrances) has evolved independently in the diverse ant genera Camponotus Mayr (Colobopsis, Hypercolobopsis), Cephalotes Latreille, Colobostruma Wheeler (Colobostruma leae), Crematogaster Lund (Colobocrema), Pheidole Westwood (Pheidole colobopsis, Pheidole lamia), but also in other genera, such as Blepharidatta Smith, (Blepharidatta conops), Tetraponera Smith (Tetraponera phragmotica) and Carebara Westwood (Brandão et al. 2001, Hölldobler and Wilson 1990). Phragmosis is most strongly developed in the New World arboreal genus Cephalotes, where usually all castes (queens, and major and minor workers) have highly adapted shield-like head morphologies that enable them to plug their nest entrance without exposing eyes, antennae or mandibles to any would-be intruders. Wheeler and Hölldobler (1985) discussed phragmosis in Cephalotes and reported the discovery of “glandular openings” on the cephalic shield that supposedly excrete fibrous material, covering the head in a dense layer of organic material and most likely serving as camouflage of the head that plugs the nest entrance. A very similar phragmotic head shape has evolved independently in some Old World species of Carebara, where a special major worker subcaste occurs in addition to regular major and minor workers.

Heads in the shape of a saucer or a concave shield protecting eyes, antennae and mandibles from possible injury by attackers may have evolved convergently in major workers of the Southeast Asian Carebara butteli (Forel), Carebara nayana (Sheela & Narendran) and in the subsequently treated Afrotropical Carebara species. The cephalic shields of two newly described species (Carebara phragmotica and Carebara lilith) were found to be covered by a layer of debris (soil, maybe organic material; see Fig. 1), which may serve as camouflage to make the ant blend in with the soil around the nest entrance.

Chapter 8 of The Ants also provides an overview of this phenomenon and some context regarding nest defense. Specialization by majors: defense

Phragmosis is known in the following species:

Subfamily placement (in red) of species known to have phragmotic workers.

Wheeler and Holldobler (1985) investigated how Cepholates workers might collect or accumulate debri on their head disks. Such debri can be used as camouflage for individuals that are using their head to block the nest entrance, much like Basicerotini and Stegomyrmicini ant species affix dirt their bodies. They discovered Cephalotes pallens do in fact have encrusted material on their head disks. This varied from slight to extremely built-up material. Unexpectedly these covering materials appeared to be produced by the ants, rather than an accumulation of material that was affixed and somehow binded to the head disk. The presence of many pores, which are presumably attached to glands, are the likely source of secreted fibrous and filmy substances that were detected.

They also discovered: "Z. pallens (Figs. 4-6). To the eye, the head of the soldier shown in Fig. 4a appeared to be covered with a thin layer of dirt. Closer examination revealed that the surface was covered with irregular ribbons of material (Figs. 4b, 5a). Pores were visible along part of the central ridge (see Fig. 5b). Material seemed to be extruded in lumpy strands from a number of the pores (Figs. 5b, 6), supporting the suggestion that it is secretory in origin."