From Wilson (2003): P. bicarinata is highly adaptable across its range in both habitat and nest site. In Colorado, Gregg (1963) recorded bicarinata between 1000 and 2100 m, nesting in rotten logs as well as various types of soil beneath stones. The habitats occupied were very diverse, comprising pinyon-cedar and mixed deciduous woodland, canyon-bottom meadows, shortgrass prairie, and sagebrush desert. In Utah and Nevada, bicarinata occurs from sagebrush desert to montane woodland, nesting under stones and pieces of wood, as well as crater nests in open soil (Ingham 1959, 1963; Cole 1966b; Allred and Cole 1979). In western Texas, it has been found in xeric habitats in open soil and under stones, cow dung, a bale of hay, and in cracks in asphalt. Beck et al., studying scavenging ants of Utah, observed workers feeding on dead rodents. Males were found in one Colorado nest in early July. In the eastern United States the species favors sandy soils with some clay content. It is often abundant in open, disturbed grassy areas, such as lawns, golf courses, and abandoned fields (Stefan Cover, personal communication). It is omnivorous in diet, and regularly harvests seeds. Diana E. Wheeler and Frederik Nijhout used bicarinata in their pioneering studies to demonstrate the role of juvenile hormone in the determination of the major and minor subcastes; they traced development through four larval instars (see Wheeler 1991).

Mackay and Mackay (2002) - For co-occuring Pheidole species in New Mexico, Pheidole bicarinata is difficult to separate from Pheidole cerebrosior. It differs in that the vertex of the head of the minor worker is smooth and polished, or finely, transversely striolate, whereas the vertex of P. cerebrosior is densely punctate. There is a considerable amount of variation in the sculpturing of the vertex of the minor worker, and it is often difficult to identify a series, as different workers may have characteristics of both species. Pheidole bicarinata could be confused with Pheidole marcidula, but can be separated as the minor lacks the clavate hairs on the dorsum of the mesosoma.

New Jersey to northern Florida and west through Nebraska, Colorado, and Texas to Utah and Nevada. (Wilson 2003)

This species has a preference for open sites with sandy soils and habitats that are at the moister end of dry (e.g., grasslands and valley bottoms in arid areas), at least in the west. It also inhabitats sites that have some but not all of these characteristics. Gregg (1963) stated Pheidole bicarinata in Colorado was a Sonoran Zone species. In the eastern US (Carter, 1962; Wilson 2003) this ant is common in fields and open grassy locations, including in ruderal sites (sidewalks, lawns, and along the shoulder of roads).

Nests are found underneath ground-covering objects, within rotten downed wood, or in open ground with a small crater mound. Mounds are typically incomplete, resembling a wedge or crescent.

Seeds are collected and may be stored in underground granaries that are part of the nest. Workers also visit extraflora nectories.

This species is a host for the eucharitid wasp Orasema coloradensis (a parasite) (Universal Chalcidoidea Database) (primary host).

Mackay and Mackay (2002) - Occurs in grasslands (including arid sites with yuccas), scrub oak, pine and cedar, pinyon-juniper forests, oak forests, ponderosa pine forests. Pheidole bicarinata nests in rotten logs, as well as in the soil and under objects (especially stones) in grassy areas with fine sand. Brood was found in nests in March and August. They are attracted to baits on the soil surface (Vienna sausage). This species is the host of Solenopsis molesta.

The two Oresema sp. wasps shown below were found by Stefan Cover with a colony of P. bicarinata in Arizona (Specimen Labels).

"Within Hymenoptera, the family Eucharitidae (subdivided in three subfamilies: Oraseminae, Eucharitinae, and the Indo-Pacific Gollumiellinae) is the most numerous and diverse group of ant parasitoids [1, 2]. All of the members of this family have a highly modified life cycle [3–6]. Unlike most parasitic wasp species, eucharitid females deposit their eggs away from hosts, in or on plant tissue [2, 7]. The active first instar larva, termed planidium, is responsible for gaining access to the host ant larvae by using various phoretic behaviors including either attachment to an intermediate host (most often a potential ant prey) or to foraging ant workers, with on occasion the presence of attractive substances in or on the eggs [2, 8]. Within the nest, planidia attach themselves to ant larvae, but development is only completed when the host pupates [6, 7, 9, 10]. In almost all of the cases, adults emerge among ant brood (but see [11]) and have to leave the host nest to reproduce. Ants show only moderate aggression to newly emerged eucharitids [7, 12–17] and transport them outside as if they were refuse [11, 15, 17], ultimately enhancing wasp dispersal. Parasitism is very variable and localized in time and space [13, 18, 19]. A very high local prevalence may lead to only a very low impact at the regional scale, suggesting that these parasitoids do not have a major influence on the dynamics of their host population [19]. However, they constitute a remarkable example of both host-parasitoid coevolution and host behavior manipulation."

Minor: humerus in dorsal-oblique view obtusely subangulate; petiole variable in size and shape, from small and equilaterally triangular to moderately elongate. P. bicarinata is a taxonomically difficult species (or, possibly, complex of closely similar species). It is highly variable, especially geographically, in propodeal and pronotal sculpturing, and as suggested above, in development of the propodeal spine, and in color. The variation among different characters is discordant to some degree, and intermediates within the respective characters occur. I believe it prudent for the present to leave the described infraspecific forms as a single species (I am indebted to Philip S. Ward for valuable information and advice on the variation and status of bicarinata).

COLOR Major: body varying geographically, from clear yellow in the western parts of the range to brownish yellow to dark brown in the east. 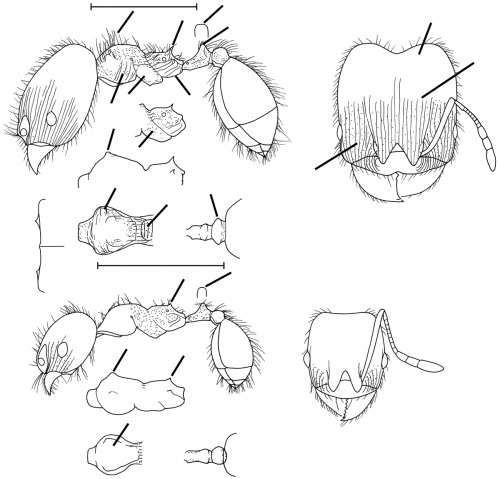