The unpublished records of Stefan Cover show that yaqui occurs in southern California from desert at lower elevation to creosote-acacia-juniper scrub in the uplands. The colonies of 50 to 100 workers nest in arid soil, sometimes with a crater of excavated earth and seed chaff. At Deep Canyon, near Palm Springs, California, Wheeler and Wheeler (1973) found yaqui in desert and in palo verde and agave-ocotillo scrub, in crater soil nests; they uncovered caches of Euphorbia micromera and Oenothera clavaeformis seeds inside the nests. (Wilson 2003)

The nests of Pheidole yaqui are always small. They usually consist of twelve to fifteen majors and about three or four times that number of minors. The majors forage with the minors occasionally but much less often than in Pheidole xerophila, where it is the rule for both majors and minors to forage. P. yaqui prefers very arid nest sites, and in this particular it agrees more closely with Pheidole gilvescens than with xerophila. The senior author was unable to get any evidence of the food preference of yaqui. No chaff piles were encountered and no seeds were found in the nests. (Creighton and Gregg 1955)

From Wilson (2003): DIAGNOSIS Close to and possibly a senior synonym of Pheidole bajaensis, differing as follows.

Minor: humerus in dorsal-oblique view subangulate; occiput narrow, its corners less angulate than in bajaensis. Together, yaqui and bajaensis differ from Pheidole gilvescens and Pheidole xerophila in the major’s head shape, which is rounded (not flattened) in the dorsal profile of its posterior half, an failure of the head to taper toward the occiput; other traits exist in the major and minor as depicted.

Minor: body and appendages medium yellow except for dorsal surface of head, which is a slightly contrasting shade of light yellowish brown. 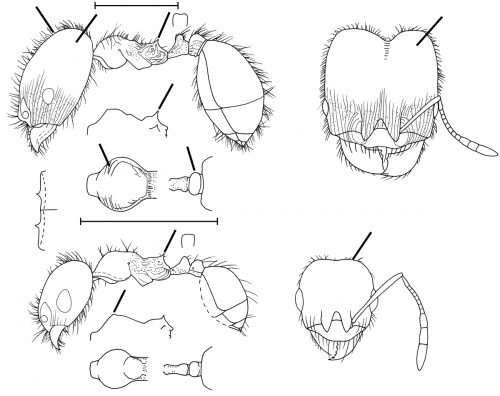 Named after either the type locality or the Yaqui people of the Sonoran desert. (Wilson 2003)