Kikuchi & Tsuji (2005) reported finding 5 colonies of Probolomyrmex longinodus. The nests were in snail shells, filled with soil, under the leaf litter in primary forest (Yonaguni Island, the Ryukyus 24°26′N 122°57′W﻿ / ﻿24.433°N 122.95°W﻿ / 24.433; -122.95). They found a mean of 22 workers per colony and from 3 to 13 dealate queens. Only one of the queens was inseminated and had active ovaries. The remainder of the dealate queens were all virgin and ovarian condition indicated they had never produced any eggs. It is likely that they had failed to disperse, and may have engaged in non-reproductive activities.

Eguchi et al. (2006) - P. longinodus is most similar to Probolomyrmex longiscapus. Xu & Zeng (2000) gave the following diagnostic characteristics by which the latter is separated from the former in the worker: head longer, occipital margin almost straight; scape much longer; propodeal teeth larger; and in dorsal view posterior 1/3 of petiolar node narrowed backward. But when the additional nontype material was included in our examination, the two species were not separated by CI, condition of occipital margin, size of propodeal teeth, and shape of petiolar node. Although SI in the worker seems to be a valuable character separating the two species, the Taiwanese form has larger SI (122–127, 3 workers measured). In the present study we found only a small difference between the workers of the two species (as given in the key), while the male provides better characters which support the separation of the two species (see under P. longiscapus).

Anterior slope of petiole is gentler, posterior portion of subpetiolar process is slightly higher, and mesosoma in dorsal view is a little slenderer in the workers from Thailand than in those from the S. Ryukyus. However, there is almost no difference in SI between them.

Kikuchi & Tsuji (2005) - Queens have spermatheca and ovaries. Workers have no spermatheca and their ovaries have neither mature oocytes nor yellow bodies, and the mean length of their ovarioles was significantly shorter than that of the inseminated queens. Both queens and workers have one ovariole in each ovary. 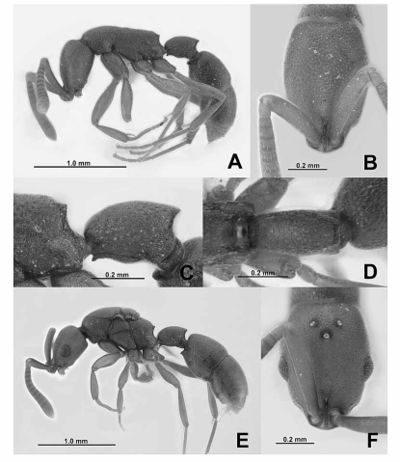 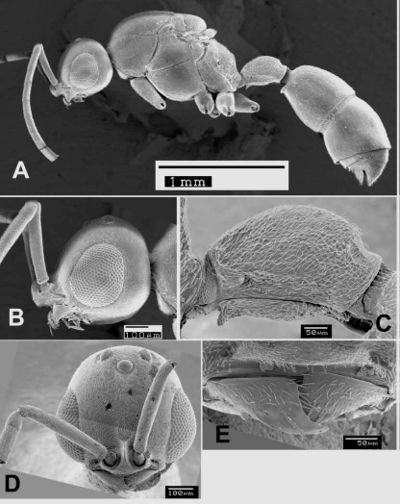