All ants form colonies consisting of one or more egg-laying females (queens or gynes), a large number of sterile females (workers) and, in mature colonies and during certain times of the year, winged sexual females and males. Colonies vary greatly in size, from a single queen and a few workers to hundreds of thousands of queens and many millions of workers. The vast majority of ants fall between these extremes, with one or a few queens and a few tens of thousands of workers. But at the upper extreme, a few species (see list below) can develop huge colonies which are referred to as supercolonies. 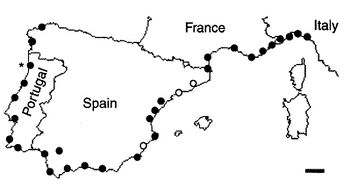 Map of 33 European populations of Linepthima humile sampled by Giraud, T., Pedersen, J.S. et al., 2002 (their Fig. 1). Populations were assigned to one of two distinct groups based on the aggression tests: the main supercolony (F) and the Catalonian supercolony (E). In the population marked with asterisk, workers were heavily infected with mites, which affected the behavioral interactions. Consequently, this population was not included in the analysis of behavioral data. (Scale bar is 100 km.) 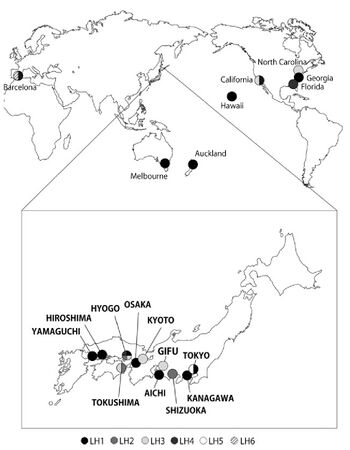 Geographical distribution of Linepithema humile populations sampled by Inoue, M.N., Sunamura, E. et al., 2013 (their Fig. 1). Each colour represents one of the six haplotypes identified in their study.

Supercolonies have multiple queens (are polygynous) and consist of many connected nests (are polydomous) spread over large areas, in some cases thousands of square kilometers. Each supercolony maintains a clear separation from other supercolonies, with workers moving freely within their supercolony and identifying nest-mates by their colony specific cuticular hydrocarbon profiles (Holldobler and Wilson, 1990; Tsutsui, 2004). These colonies can grow exponentially and expansion not only through budding, but also through jump-dispersal, potentially over long distances. When budding occurs, workers still move freely among nests where the environment permits, intermixing and thereafter cooperating indiscriminately with other portions of the colony (Torres et al. 2007), although in some instances low-level aggression may occur, at least temporarily (Roulston et al. 2003).

In species like the Argentine ant (Linepithema humile), colony growth seems to continue as long as suitable unoccupied space is available (Buczkowski and Bennett 2008; Van Wilgenburg et al. 2010). Therefore, a colony can expand to cover huge expanses but nevertheless have a clear membership and distinct boundaries (Torres et al. 2007). The capacity of a colony to grow without constraints is the strongest basis for describing such ants as having supercolonies (Moffett 2012). Because of their nesting and dietary generalism, invasive ants with supercolonies are especially successful as stowaways in human cargo (Holway et al. 2002). Over the past century, jump-dispersal has expanded the natural range of numerous species of invertebrate (e.g., Ascunce et al. 2011; Booth et al. 2011; Saenz et al. 2012; Gotzek et al. 2012) and in the ants has led to single supercolonies ranging across continents (Vogel et al. 2009; Sunamura, Espadaler et al. 2009; Vogel et al. 2010). For example, in 2009 it was demonstrated that the largest Japanese, Californian and European Argentine ant supercolonies were in fact part of a single global "megacolony" (Sunamura, Espadaler et al. 2009). Further, tests demonstrated that within each of these countries several separate supercolonies were present, each distinct from the multi-continental supercolony shared across all three countries. This intercontinental megacolony represents the most populous recorded animal society on earth, other than humans. Previous to finding this multi-continental Argentine Ant supercolony, the largest known supercolony was on the Ishikari coast of Hokkaidō, Japan. The colony was estimated to contain 306 million worker ants and one million queen ants living in 45,000 nests interconnected by underground passages over an area of 2.7 km2 (670 acres) (Higashi & Yamauchi, 1979; Inoue et al., 2013; but see Sunamura, E., Hatsumi, S. et al. 2009). In 2000, an enormous supercolony of Argentine ants was found in Southern Europe (report published in 2002). Of 33 ant populations tested along a 6,004-kilometre (3,731 mi) stretch along the Mediterranean and Atlantic coasts in Southern Europe, 30 belonged to one supercolony with estimated millions of nests and billions of workers, interspersed with three populations of another supercolony (Giraud et al., 2002). Finally, another supercolony, measuring approximately 100 km (62 mi) wide, was found across Melbourne, Australia in 2004 (Bjorkman-Chiswell et al., 2008; Suhr et al., 2009) and which was later found to have spread, through jump-dispersal, to Adelaide and Perth, a distance of approx. 2,700 km (Suhr et al., 2010).

Definition of a Supercolony

Kennedy et al. (2014) offers the following comments on the definition of a supercolony: There has been much debate as to the definition of ‘supercolony’ (Gordon & Heller, 2012; Lester & Gruber, 2012; Moffett, 2012a,b; Pedersen, 2012; Suarez & Suhr, 2012); here, we use the term in its conventional sense for a large network of functionally integrated polygynous (multiple queen) nests (Helanterä, 2009). Workers, brood, queens and resources are trafficked between these nests. Consequently, individuals regularly cooperate with nonrelatives. This not only appears paradoxical for inclusive fitness theory (Jackson, 2007; Helanterä et al., 2009), but also suggests supercolonies may be vulnerable to trait degradation – as the extensive mixing of lineages that leads to workers helping unrelated queens should hide worker phenotypes from selection – and therefore be evolutionarily short-lived (Queller & Strassmann, 1998; Linksvayer & Wade, 2009; Helanterä et al., 2009; note that this may not apply in supercolonial species with worker reproduction, for example in some Formica, Helanterä & Sundström, 2007). However, competition among adjacent supercolonies (Pedersen et al., 2006) or genetic viscosity within supercolonies in some genera (e.g. Formica) may restore the utility of altruism (Chapuisat et al., 1997; Helanterä, 2009; Holzer et al., 2009), potentially maintaining supercolonies as stable social structures that could be candidates for individuality.