Seifert (2003) - C. obscurior was reported to nest in cavities of bushes and trees 2 - 5 m above the ground level; it was found in dead twigs of trees such as Erythrina variegata (Okinawa), in dwarf coconuts (Brazil), galls of Acacia trees (Brazil), in a dead twig on a tree (Florida), on a Ficus tree (Israel), in the gall of a Tamarix bush (Israel), and in the cavity of a coconut high in the tree (Zanzibar). 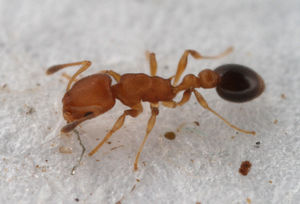 Seifert (2003) - C. obscurior produce alate and ergatoid males (Yamauchi in lit. 3 July 2000, my own material). Average differences in chromosome numbers seem to exist but the numbers are not constant. C. wroughtonii from the Okinawa Islands had 2n = 56 chromosomes while sympatric C. obscurior had 2 n = 52 chromosomes (Yamauchi in lit., 3 July 2000). A C. obscurior sample from Gainesville/Florida had 2n = 48 (Francoeur in lit., 19 October 2000). Colonies may have more than one queen. New nests can be formed by fission.

In the present study, we investigate the proteins produced by the accessory glands of the two male phenotypes. The seminal fluid of insect males is known to contain a complex mixture of proteins with multiple functions in sperm protection, antimicrobial defence and the induction of multiple changes in female physiology (Avila et al., 2011). Our proteomic and transcriptomic study reveals that the seminal fluid and themale accessory glands of the male-diphenic ant C. obscurior contain several hundred proteins, of which many appear to differ in quantity between winged and ergatoid males. More than 20 proteins showing considerable overlap with other studies on insect seminal fluids. One example includes proteolysis regulators, such as serine proteases, carboxypeptidases and serine protease inhibitors (serpins), which all are common accessory gland proteins of insects (Ravi Ram & Wolfner, 2009; Mueller et al., 2005; Baer et al., 2009a; Xu et al., 2013; LaFlamme & Wolfner, 2013; Yu et al., 2016; Bayram et al., 2017). Although their function in C. obscurior remains to be determined,male-derived serine proteases are suggested to stimulate egg laying and other post-mating changes in the female of various insects (LaFlamme & Wolfner, 2013).

Characterized by its dark color, the body and appendages being dull brown, the legs scarcely paler, the antennal clubs distinctly infuscated, the Whole gaster dark brown, except the posterior borders of the segments, which are paler.

The single specimen of this sex is dealated and headless and is perhaps immature, the body is paler and more yellowish than in the worker, except the tegulae, which are black and the gaster, which is dark brown throughout, with paler posterior borders to the segments.

One worker and one female from Eisei, Formosa.

Seifert (2003) - Three investigated gynes from the Museum of Comparative Zoology collection, labelled by Wheeler “Kagi, Formosa 11.1.1927 R.Takahashi Wm. M. Wheeler\ Cotypes\ var. obscurior Wheeler” fully match the conception of C. obscurior presented here but cannot be considered as genuine type material. These gynes were the basis of a second description, published on 7 March 1 930 (Wheeler 1930). Wheeler's first description, published on 22 October 1929, was based upon one worker and a headless dealate queen collected at Eisei / Formosa (Wheeler 1929). These specimens were not available from MCZ Cambridge and are believed to be lost.