One of a number of Palearctic wood ants that build complexes of large mound nests. Gilev et al. (2015): A widespread and common species of red wood ant that inhabits the entire taiga belt of Eurasia (Dlussky, 1967). Similar to all red wood ants, this species displays a high degree of morphological variation.

Collingwood (1979) - Bicoloured with dark markings on head and promesonotum varying in size and intensity - generally not as brightly coloured or as large as Formica rufa. In the typical form distinct outstanding hairs fringe the posterior border of the head but do not occur forward towards the eyes as in Formica lugubris. In many samples from South Norway and South Finland these hairs may be hard to find or absent. Erect hairs on gula and dorsum of alitrunk variable, usually short and sparse. Eyes with distinct short hairs but much less prominent than in F. lugubris. Frons rather dull with close dense microsculpture, gaster very closely punctured. Suberect hairs on extensor surfaces of hind femora and tibiae always present but sometimes few. Antennal scapes bare. Head width of largest workers less than 2 mm. Length: 4.0-8.5 mm.

Gilev et al. (2015) - The results of studying the color variation of the red wood ant F. aquilonia in Northwestern Russia and Fennoscandia are presented. Pronounced phenotypic differentiation among the ant populations was observed, which may be interpreted in the light of postglacial dispersal of the species. Ants from Karelia and the environs of Moscow showed high similarity in their color variation. The share of a light morph (Pn3) increased in more northern localities, namely the Pasvik Reserve, and also in more western ones, namely St. Petersburg and Espoo. Thus, there were two vectors of ant dispersal: the northern and the western ones, coinciding with the known routes of postglacial recolonization by small mammals. 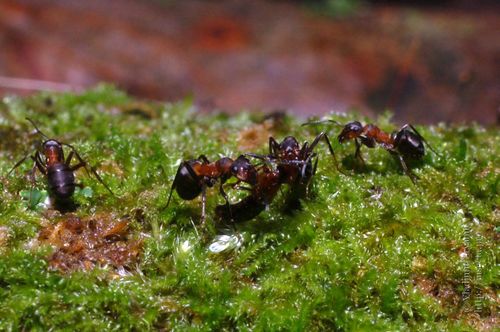 Collingwood (1979) - This is undoubtedly the commonest wood ant in Fennoscandia. Large tracts of forest in the centre and north are dominated by this species which is usually found in large multicolonial groups with isolated nests being very rare. This is one of the least aggressive species of the F. rufa group. Long compact trails radiate from each nest to other nests or to aphid bearing trees and antagonism between neighbouring nests has not been observed. In South Norway and South Finland comparative hairlessness in many populations makes for confusion with the rather similar F. polyctena. Usually, however, if enough workers are collected a majority of at least 60 % of individuals will be found to have some projecting hairs at the back of the head.

However there is a form of this species found locally in the western suburbs of Helsinki to the Sjuntio district of Ab, within an area of about 40 km by 10 km, which is almost completely hairless in all parts of the body given as species specific by Yarrow (1955) for F. aquilonia. All castes moreover tend to be somewhat larger and more brightly coloured. This could well be a subspecies or species in the making. Its foraging habits have been studied by Rosengren (1971, 1977a, 1977b) under the name of Formica polyctena. This consistent degree of hairlessness has not been found elsewhere within the range of F. aquilonia, except perhaps in Esthonia, according to samples sent to H. Wuorenrinne by Professor V. Maavara.

The characteristics are as follows: only about 5 % or fewer workers in a series have an indication of short hairs projecting from the occipital comers of the head. Queens have no such hairs but occasional microscopic hairs have been detected on the basal face of the gaster in a very few specimens of about 50 examined. In the few males examined only 1 in 12 has projecting genal hairs. The reasons for retention as an infraspecific form of F. aquilonia include the close sculpturing of the worker frons, small eye hairs which are always present as in F. aquilonia while hairs on the extensor surface of the femora form a more or less close fringe as in F. aquilonia in a majority of the workers. The queen, which appears more brilliant than F. aquilonia, has extremely close micropunctures on the gaster as in that species (and in this character alone is quite unlike F. polyctena) while the male has fringing femoral hairs although specimens are also somewhat larger and more shining than F. aquilonia.

Novgorodova (2015) - Foragers and guards of Formica aquilonia are much more aggressive towards their topical competitors, the predatory ground beetles (Coleoptera, Carabidae), than towards mixo-phytophages (Dorosheva and Reznikova, 2006).

Novgorodova (2015b) investigated ant-aphid interactions of a dozen honeydew collecting ant species in Western Siberia pine and aspen-birch-pine forests (54°7´N, 83°06´E, 200 m, Novosibirsk) and mixed-grass-cereal steppes with aspen-birch groves (53°44´N, 78°02´E, 110 m, near Karasuk) in the Novosibirsk Region and coniferous forests in the northeastern Altai (north end of Lake Teletskoe, 51°48´N, 87°17´E, 434 m). All of the ants studied had workers that showed high fidelity to attending particular aphid colonies, i.e, individual ants tend to return to the same location, and group of aphids, every time they leave the nest. F. aquilonia's honeydew collecting activities were highly coordinated during the summer months when the aphids and ants were most active. Individual foragers specialized on specific tasks and could be classified as shepherds (collect honeydew), guards (protect aphids from competitors), scouts (search for new aphid colonies) and transporters (transport honeydew to the nest). Individuals performed the same type of work day after day, with groups of the same workers, thereby forming teams. In cooler months when aphids were still active foragers were less specialized: some ants were "on duty" (constantly present in a particular aphid colony, collecting honeydew and /or protecting aphids from various competitors) and others that showed no specialization. F. aquilonia tended: Symydobius oblongus (Heyden) and Chaitophorus populeti (Panzer).

The complex of Kryukovaya Ridge (Formica aquilonia) included 54 nests. Since this locality was hard to access, the complex was completely examined only in 2010 and partly examined in 2013. Of the 54 nests, 42 revealed traces of heavy damage, up to total destruction; 40 nests (74.1%) were damaged by wild boars, one nest, by the bear Ursus arctos L., and one, by the badger Meles meles L. Most of the nests damaged by boars were almost completely destroyed, with only the circular mound remaining and a small central or peripheral dome built by the survivors. Most of the inhabited nests in this complex, namely 29 (53.7%), were located on the mounds of the previously destroyed larger nests. Under the conditions of total destruction, the diameters of the nest mound (D) and the dome base (d), i.e., the most objective indicators of the nest size dynamics, were considerably reduced. The mean diameter of the mound (D) of destroyed nests was 277 ± 71 cm (n = 29), whereas the mean diameter of the dome base (d) of inhabited nests was only 104 ± 45 cm (n = 25). Only 14 intact or weakly damaged nests were found in this complex, of which only two had the conical domes typical of active nests while 12 were flattened, i.e., not very viable. All these data indicated a considerable degree of degradation of the complex.

This species is a host for the following eulophid and braconid wasp parasites (Universal Chalcidoidea Database; Quevillon, 2018):