A common forest ant that makes large mound nests. Their conspicuous nests make this a well known and recognizable ant for anyone that has spent time in European lowland forests. Queens start new colonies by parasitizing nests of other ants. 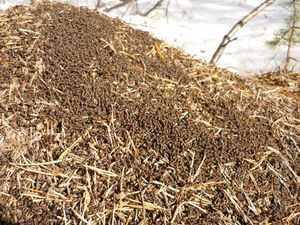 Collingwood (1979) - This is the common wood ant of most of lowland Europe building large hill nests of leaves and twigs. Nests may be isolated or in small groups, normally with many queens, up to 100 or more. Various estimates of numbers of workers in a populous nest range from 100,000 to 400,000. This is an aggressive acid squirting but somewhat clumsy species. Foraging trails radiating from a large nest may be up to 100 m or more usually orientated toward suitable aphid bearing trees. Prey is taken somewhat unselectively from both trees and forest floor with any insect, arthropod or earthworm taken back as food to the nest although the main diet as with all species of this group is aphid honey dew. These ants mass in tight clusters on the top of the mound in the early spring sunshine. The first queen laid eggs develop into alate sexuals which fly off the nest early in the summer from May until early July. New nests arise from colony splitting in the spring but occasionally single queens may secure adoption in nests of Formica fusca.

A monogynous form of F. rufa occurs in continental Europe and probably locally in Sweden but has never been found in England. This is the Formica rufa rufa of Gösswald (1941). Average worker size of this form is generally large and samples are usually conspicuously hairy. Many males from such isolated colonies in the Netherlands may have one or more coarse hairs protruding from the genae below the eyes and very occasionally queens may have very short sparse hairs on the basal face of the gaster but all such individuals have the widely spaced puncturation of true F. rufa and although workers may have a few hairs on the upper surface of the hind femora they never form a close fringe as in other species. This form has also sometimes been referred to as F. piniphila Schenck, 1852. Although generally monogynous, similar hairy specimens occur on the coastal dunes of the Netherlands in polygynous colonies.

Stukalyuk (2017) - Among temperate ants, the genus Formica is especially dependent on temperature during brood rearing because of a short period of development (Kipyatkov 2001). This variant is referred to as the strategy of spring rearing of reproductive individuals with resource accumulation in autumn (Kipyatkov and Lopatina 2007).

Serial brood rearing is characteristic of F. rufa. Active egg laying occurs in spring at a temperature of 20–30°С in the nest; thereafter, the queens move to chambers where temperature is 18°С (Horstmann 1975). The queens return to the warm chambers in June and resume egg laying, which continues until early August. Preparations of the colony for wintering are usually completed by mid-September (Kipyatkov and Shenderova 1986). The nests of F. rufa are warmed up by body heat produced by ants (Dlussky 1975), with reserve sugars being a likely energy resource for this activity. The temperature in the nest may rise from 7–10°С to 20–25°С within 12 h, which is favorable for egg laying and brood rearing. However, according to Zakharov (1978), F. rufa with a diameter of up to 0.6 m and a population of no more than 100 thousand ants are incapable of self thermoregulation. The regime of warming in such nests depends on solar radiation, and this puts them at risk. Larger nests can maintain their thermal regime autonomously. Self-thermoregulation in F. rufa nests is a prerequisite for successful growth of the colony and brood development.

Stukalyuk (2017) - Formica rufa was found to practice an unusual form of seasonal polydomy for a temperate species: nesting in trees. A population was studied in Kiev, Ukraine in a forest/forest steppe ecotone from 2013-2015. During the spring colonies show a typical wood ant pattern of using a main mound as their primary nest with various satellite mounds forming a complex of nest locations. Workers will adjust and shift brood between nest locations, and even form new nests, in response to temperature and food availability. Changes in insolation will prompt moves to more optimal mounds with higher temperatures that facilitate brood development times, and areas that are particularly rich with food resources are often exploited by moving portions of the colony to mounds closer to richer food sources. In the summer, a few colonies in the study area were found to have formed nests in hollow portions of oak tres (Quercus robur) and, in one case, in a similar situation with a pear tree (Pyrus communis). The arboreal nest was utilized from April to August/September. Workers moved brood, nest materials and workers into the trees early in the season and they eventually were found to contain queens and eggs as well, hence the nest was not simply a satellite foraging nest. During the fall, while migrating out of the nest, pupae were also observed being moved. Temperatures were found to average 0.5 - 1.0 C higher in the tree nest with tree crown temperatures as high as 2 - 4 C warmer in comparison to shaded ground temperatures. One tree contained two hollows: one 75 L in volume and 15 m above ground and the other 1 m below with a volume of 20 m. 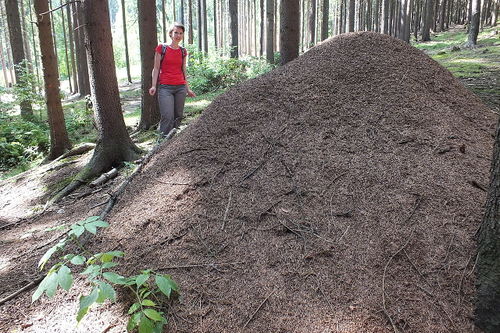 The Northern complex (Formica rufa) has been observed since 1997, when it consisted of 15 nests. The greatest number of nests (19) was recorded in 2004. The complex is positioned to the north of the central base of the reserve, along the edge of a middle-aged herb birch forest. Since the beginning of the prolonged high-water period (2004), the nests of this complex were repeatedly destroyed by boars. The surviving ants often built two or three small domes in the place of a large destroyed nest. Only 12 nests remained in 2010, three of which were fragmented into small domes built on the common mound. Before 2004 the mean diameter of the dome base (d) in this complex was 146 ± 54 cm (2001; n = 14), whereas in 2010 it was only 96 ± 26 cm (n =16). The mean dome height (h) also decreased twofold, from 60 ± 15 cm in 2001 (n = 14) to 30 ± 13 cm in 2010 (n = 16). The weakened nests were overgrown with grass, which further decreased their viability. Presently, the complex does not include any strong, viable nests with distinctly conical domes. The nests are hemispherical or flat and overgrown, or fragmented into several small domes. The principal nest, which is more than 60 years old according to the long-term residents, is now strongly flattened and overgrown with grass.

The name Formica rufa was first proposed by Linnaeus in 1758 based on a worker from Europe. A few years later, in 1761, Linnaeus described what he thought were the queen and male of this same species. In fact, these specimens belong to separate species, the worker being conspecific with Camponotus herculeanus (Linnaeus, 1758) while the queen and male are true Formica.

Over the years, myrmecologists developed a concept for Formica rufa based on the queen and male without realising, understanding or appreciating (depending on the author) that the true type, the worker, was actually a Camponotus. This descrepancy could potentially cause significant nomenclatural problems as Formica rufa is the type species of the genus Formica, and if Formica rufa were to be transferred to Camponotus, as would be required based on the type material, then Formica and Camponotus would become synonyms and (as Formica is the older name) all Camponotus species would become Formica species. This situation was so unacceptable that most authors chose to ignore the problem.

To formalise this suggestion, the International Commission on Zoological Nomenclature published Opinion 424. Technically, this Opinion validated under the Plenary Powers the specific name rufa Linnaeus, 1761, as published in the combination Formica rufa and designated under the same Powers the species so named to be the type species of the genus Formica Linnaeus, 1758 (class Insecta, order Hymenoptera). In other words, Formica rufa would now be based on Linnaeus (1761) rather than Linnaeus (1758). In addition, this Opinion suppressed the name Formica rufa Linnaeus, 1758, meaning that it could no longer be used for nomenclatural purposes. Essentially it sets aside the Linnaeus (1758) description and replaces it with that of Linnaeus (1761). This is an elegant solution to a potentially disruptive situation and has been widely accepted and followed since its publication.