Myrmoteras is unique among the Formicinae in having the mandibles specialized as trap-jaws. This feature has evolved independently several times in ants and is also found in the ponerines Odontomachus and Anochetus, as well as a few myrmicine genera such as Strumigenys. Species are found largely in forested areas where they forage singly on the surface of the ground and in leaf litter. Nests are tiny, with a single queen and less than 10 workers, in soil or small twigs on the ground. These ants are relatively rare, or at least uncommonly encountered. The genus is primarily Oriental, occurring from India to the Philippines, Sulawesi and Lombok but is especially rich in Borneo and Sulawesi.

Worker. Small to moderately sized (TL 3.9 to 7.0 mm) monomorphic ants belonging to the subfamily Formicinae. Head very large, broader than trunk or gaster, and at least half as long as trunk. Head strongly constricted in back of ocelli so as to form a clearly demarcated occipital lobe which extends transversely across the back of the head; the lobe is narrowed medially above the foramen magnum. Eyes huge, oval and strongly convex, well over half as long as the head length; taking up most of lateral surfaces of head. Ocelli invariably present. A hair originating beneath each compound eye projects forward to either side of clypeus and is usually visible in full face view. Antennae 12-merous; scapes long, gently curved and incrassate distad, invariably extending well beyond occiput; funiculus with segments III generally shortest, terminal segment the longest by far. Antennal fossae positioned dorsally between eyes rather than anterior to eyes as in Gesomyrmex; insertions far apart near eye margins and some distance behind the clypeus. Frontal carinae absent, although margins of antennal fossae somewhat raised.

Mandibles slender and extremely elongate, usually longer than head (at minimum 85% as long as head), with the toothed margin running virtually parallel with lateral margins (never subtriangular as in most formicines); somewhat wider than deep in cross section. Mandibular teeth well separated, numbering 8 to 14. The proximal teeth are tiny, but distally the teeth become longer, slender and sharp. There are invariably one or (more commonly) two apical denticles between the apical and penultimate teeth. Mandibles articulated laterally, not relatively close together along anterior margin as in Odontomachus (where the front of the head is strongly constricted); nevertheless, the mandibular bases are more approximate than in other formicines because the front of the head is relatively narrow. Clypeus about 25 to 50% wider than long, lacking a feeble medial ridge; generally having a well-developed clypeal tooth at each forward corner and with more or less conspicuous lateral flanges. Clypeus not conspicuously produced, leaving mandible bases and labrum exposed. Labrum elongate, with a small, dorsalmost portion visible in full face view; the remainder projects downward between mandible bases. Palpal formula variable: maxillary 3 to 6; labial 2 to 4 segments.

Trunk elongate, widest at pronotum, and somewhat dumbbell-shaped, as the mesothorax is constricted and narrow, with its dorsal and ventral surfaces virtually straight and parallel in profile; pronotum and propodeum relatively massive, convex to flattened above. Metathoracic spiracles raised on conspicuous tubercles. Petiole with prominent peduncles; node broad in front view (usually widest near crown), thick and more or less rounded in profile; never strongly anteroposteriorly compressed. Sternum of petiole virtually without hairs except for a pair of ventrolaterally placed hairs near the base of each peduncle. Caster rounded, with a prominent circlet of hairs around the acidopore; about the size of the head or smaller. Legs long, with tibiae distinctly thicker than femora; middle and hind tibiae often conspicuously dilated.

Queen. Virtually identical to workers in size (including WL and gaster size), proportions and morphology, but alate. Trunk high and convex, having a full complement of flight sclerites, and often sculptured somewhat differently than in the worker.

Male. Known only for subgenus Myrmoteras. Head small relative to females, widest immediately behind eyes. Occipital lobe present, well developed. Eyes very large and convex, but relatively smaller than in workers (about half as long as head length); ocelli conspicuous. Antennae 13-merous; relative to head size scape about as long as in females; funiculus long and filiform. Mandibles greatly reduced and edentate, subtriangular with blunt tips; barely extending forward of labrum when opened and not capable of meeting apically at full closure. Forward margin of clypeus rounded, lacking teeth. Palpal segmentation variable as in females.

Trunk similar to that of queen. Node of petiole broader than in females; pairs of ventrolateral hairs near bases of peduncles present. Middle and hind tibiae slender relative to females, about as thick as femora. Parameres simple in outline, with narrow, blunt tips and having numerous setae. Pygostyles present. Digitus of volsella heavily sclerotized and strongly curved downwards, coming to a sharp terminal point, and finely serrate along dorsal margin; cuspidal lobes small, rounded. Aedeagus a pair of broad subrectangular plates. (Description of male genitalia based largely on Myrmoteras indicum.)

Fore wings with Mf1 present, and with Rs + M present but somewhat contracted (Brown and Nutting, 1949).

Primarily an Oriental distribution from India to the Philippines, Sulawesi, and Lombok of the Lesser Sunda Islands; limited to the east by Weber’s Line (Zettel and Sorger 2011).

Species of the genus Myrmoteras are among the most bizarre ant forms and unique among Formicinae by having mandibles that form into a specialized trap-jaw mechanism – a character that, however, has convergently evolved in other subfamilies (Odontomachus and Anochetus in Ponerinae; Dacetini in Myrmicinae). Myrmoteras have cryptic living habits in leaf litter, and specialized collecting methods have yielded a relatively high species diversity, especially on Borneo and Sulawesi (Agosti 1992).

Queen-worker dimorphism in body size is exceedingly small, and so is ovarian dimorphism (4 vs. 2 ovarioles). Flight thorax of queens has a large pronotum (dorsum of first segment), indicating worker-like neck muscles, hence queens are able to hunt during independent foundation (non-claustral ICF). 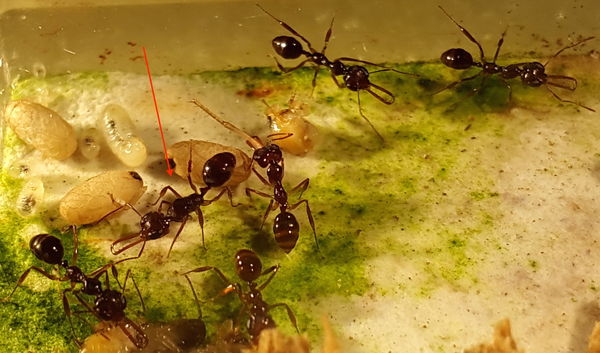 Bui et al 2013 - Myrmoteras is in the tribe Myrmoteratini Emery, 1895 (Bolton, 2003). Its geographical range is the Oriental region and the Austro-Malayan subregion of the Australian region (Moffett, 1985; Xu, 1998; Agosti, 1992; Zettel & Sorger, 2011). Creighton (1930) revised the genus for the first time, listing six species including two new species. Moffett (1985) recognised a total of 18 species including 10 new species in two morphologically distinct subgenera: Myrmoteras with seven species and the new subgenus Myagroteras with eleven species. Later Agosti (1992) revised the species in the Malay archipelago including the Malay peninsula south of the Kra isthmus, the Philippines, New Guinea, the Islands of New Britain and New Ireland, and added 13 new species. Xu (1998) described one new species from Yunnan province, southwestern China, and recently Zettel & Sorger (2011) revised the Philippine taxa, adding 2 new species, and gave a list of 34 valid species names from the whole range of the genus.