Pseudoneoponera is comprised of less than 20 species and ranges from India to Australia. The genus is notable for the unusual foamy defensive secretions its workers exude from the sting, for its small colonies, and for its unusual social systems, including the frequent occurrence of gamergates.

Schmidt and Shattuck (2014) - Workers of Pseudoneoponera are distinguished from other ponerines by their combination of robust build, coarse sculpturing, shaggy pilosity, obsolete metanotal groove, a nodiform petiole which is semicircular in dorsal view and often has a denticulate posterodorsal margin, longitudinally striate tergite A3 (rarely otherwise sculptured), and strong gastral constriction between A3 and A4. Pseudoneoponera most closely resembles Bothroponera and Phrynoponera, and to a lesser extent Ectomomyrmex, but these genera lack the shaggy pilosity, semicircular denticulate petiole, and longitudinally striate tergite A3 of Pseudoneoponera, and Pseudoneoponera lacks the spinose propodeum (except Pseudoneoponera bispinosa), five-spined petiolar node, and unconstricted gaster of Phrynoponera, and the small eyes, angular sides of the head, divided mesopleuron (except in a few species), and weakly constricted gaster of Ectomomyrmex.

Pseudoneoponera has received a fair bit of attention from researchers due to its unusual reproductive and social strategies. While most species have not been carefully surveyed, the queen caste has apparently been found in only a few species, while gamergates have been found in several species (Monnin & Peeters, 2008). In at least two species, both queens and gamergates may cohabit a single colony (see below). Just how widespread reproduction by gamergates is in Pseudoneoponera is unknown, but it may be characteristic of much or most of the genus. Interestingly, queens are unknown from all Australian Pseudoneoponera species, having only been found in some Indonesian species. It is tempting to think that the complete loss of the queen caste may be synapomorphic for the Australian species, but too little is known about relationships within the genus to test this hypothesis. 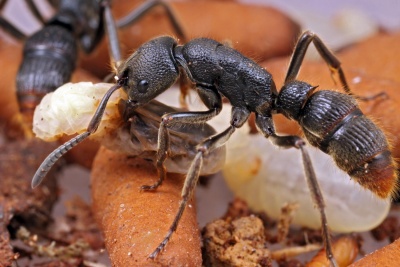 An unusual characteristic of this genus is that workers produce a foamy thread-like defensive excretion from their venom glands. This has been observed in at least Pseudoneoponera bispinosa, Pseudoneoponera insularis, Pseudoneoponera rufipes, Pseudoneoponera sublaevis, and Pseudoneoponera tridentata (Bingham, 1903; Maschwitz et al., 1981; Peeters et al., 1991; Sommer et al., 1994). The foaming is made possible by the atrophication of the Dufour’s gland and the resulting mixing of venom gland proteins with air (Maschwitz et al., 1981; Buschinger & Maschwitz, 1984). The report by Bingham (1903) that P. bispinosa and P. rufipes release the foam from their mouths is almost certainly a misinterpretation of the phenomenon, as suggested by Maschwitz et al. (1981); indeed, one of us (CS) personally witnessed a P. rufipes worker emit foam from the tip of its abdomen. Maschwitz et al. (1981) report that P. insularis and P. tridentata retain a normal sting response, in addition to the foaming mechanism, and that their sting is painful. They hypothesize (and provide supporting experimental evidence) that the foaming mechanism is more effective than the sting against small fast moving enemies such as other ants. The foam apparently acts as a physical obstacle requiring active cleaning rather than as a neurotoxin (Buschinger & Maschwitz, 1984). A similar foamy secretion has been independently evolved by at least one species of Pachycondyla (Pachycondyla harpax; Overal, 1987).

P. tridentata has an unusual social system in which colonies can have both multiple dealate queens and multiple gamergates, which compete with each other for reproductive dominance (Sommer & Hölldobler, 1992). Some colonies lack queens, in which case reproduction is performed solely by gamergates. A large proportion of both queens and workers in a colony are mated (47–100% and 81–100%, respectively; Sommer et al., 1994), and multiple individuals can be reproductively active. Since so many individuals in a colony are mated, reproduction seems to be correlated with age and behavioral dominance rather than with mating status. Workers apparently mate with males produced by their own colony, while queens do not (Sommer et al., 1994). Colony founding in P. tridentata may occur via several different mechanisms, including pleiometrosis and fission (Hölldobler et al., 1992; Sommer et al., 1994). Tandem recruitment is used during nest emigration (Maschwitz et al., 1981). Workers of P. tridentata forage individually at night, and nesting generally occurs in the ground, though nests have also been found in trees (Maschwitz et al., 1981; Sommer et al., 1994). Jessen & Maschwitz (1983) found that P. tridentata is endowed with a large number of abdominal glands whose functions are unknown.

Ito (1993, 1999) studied the reproductive strategy of an undescribed Pseudoneoponera species in Java. This species is unusual in that multiple mated workers may be present in a colony, but only the top-ranked worker is a gamergate (Ito 1993). Queens do occur, but most colonies are apparently queenless and have around 10 workers, of which one or more are mated (Ito 1993). The workers in a colony are ranked in a dominance hierarchy structured via frequent antagonistic interactions; low-ranking workers are the principal foragers (Ito, 1993). Males attempt to mate with their nestmates but are usually rejected; mating only occurs with foreign males, and only when a gamergate is absent (Ito, 1999).

Pseudoneoponera sublaevis also reproduces via gamergates, but in yet another variation on the theme, only a single worker in the colony is mated and performs all reproduction for the colony (Ito & Higashi, 1991; Peeters et al., 1991). The members of a colony are organized in a strict linear hierarchy determined by age and by ritualized dominance displays, and queens are apparently absent (Higashi et al., 1994). This species occurs in Australian Eucalyptus forests, and nests in the ground (Peeters et al., 1991). Gamergates are also known to occur in Pseudoneoponera porcata (Peeters, 1993), but the details of its mating system are unknown.

Queens have been formally described only for Pseudoneoponera sandakana (Wheeler, 1919), for which the worker caste is still undescribed. Queens have also been noted to occur in Pseudoneoponera tridentata (Sommer & Hölldobler, 1992) and an undescribed species from Java (Ito, 1993). Gamergates are common in the genus, and the queen caste has apparently been completely lost in many species. From the description of P. sandakana, it appears that queens, when they exist, are similar to workers but are alate and have the typical modifications of the head and thorax found in other alate ponerine queens.