Longino Ants of Costa Rica - The Neotropical ant genus Thaumatomyrmex is a myrmecologist's delight, being highly distinctive and rare. The mandibles are like pitch-forks, each mandible composed of three long tines joined at the base. Thaumatomyrmex workers are rarely encountered, and only a handful of specimens exist in the world's museums. They are most often collected as isolated workers in samples of leaf litter from the forest floor, extracted using Berlese funnels or Winkler sacks. Brandao et al. (1991) discovered that Thaumatomyrmex contumax and Thaumatomyrmex atrox in southern Brazil are specialist predators of millipedes in the order Polyxenida. Polyxenid millipedes are covered with detachable barbed setae which entangle potential predators. The Thaumatomyrmex workers use their long, specialized mandibles to capture polyxenids and subsequently strip them of their setae.

Schmidt and Shattuck (2014) - Thaumatomyrmex workers are among the most morphologically derived of all ponerines, and would be difficult to confuse with those of any other genus. Their pitchfork-like mandibles and widely separated frontal lobes are autapomorphic within Ponerini and immediately identify them as Thaumatomyrmex. Belonopelta and Emeryopone also have mandibles with long attenuated teeth, but their teeth are shorter than those of Thaumatomyrmex and their frontal lobes are closely approximated as is typical for Ponerini.

Schmidt and Shattuck (2014) - Thaumatomyrmex displays an unusual suite of morphological, ecological and behavioral traits. Brandão et al. (1991) examined the feeding habits of Thaumatomyrmex atrox and Thaumatomyrmex contumax and found that they are highly specialized predators of polyxenid millipedes (confirmed by Delabie et al., 2000; see also the account in Hölldobler & Wilson, 1995). 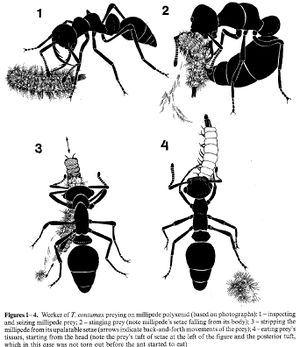 Polyxenids are covered with protective hooked setae which hunting Thaumatomyrmex workers must deal with before consuming their prey. The ants deal with the polyxenids by grasping them with their pitchfork mandibles, stinging them (presumably to minimize defensive struggles), and finally scraping off the defensive setae using their modified front tarsi, rendering the millipedes palatable (Brandão et al., 1991). Given the highly specialized mandibular structure present in all Thaumatomyrmex species and the observation of millipede predation in two different species groups, polyxenid predation is probably universal in the genus. Thaumatomyrmex workers forage individually in leaf litter and feign death when disturbed (Brandão et al., 1991). Though Thaumatomyrmex were long considered to be rare (Longino, 1988), improved sampling methods have demonstrated that their colony density can be very high (Delabie et al., 2000). Given the cryptobiotic foraging habits of Thaumatomyrmex, the function of the large well-developed eyes in the workers is a mystery (Baroni Urbani & de Andrade, 2003).

Thaumatomyrmex nests have been observed under bark, in rotting wood, under leaves, in abandoned wasp nests (Kempf, 1975; Brandão et al., 1991; Delabie et al., 2000) and one was found in a snail shell lined with hairs scrapped from prey. Jahyny et al. (2002) studied the reproductive system of two species, T. atrox and T. contumax, and found that they reproduce via gamergates and that their colonies are exceptionally small (fewer than five workers, on average, and never more than nine). Kempf (1975) also reported a small colony size for Thaumatomyrmex mutilatus and the existence of an alate queen of T. zeteki (= Thaumatomyrmex atrox). Delabie et al. (2000) documented aggressive interactions between a putative gamergate and her nestmates in a colony of Thaumatomyrmex contumax.

Baroni Urbani and de Andrade (2003), studying the Cuban species: Do the four Cuban Thaumatomyrmex species represent a case of explosive insular speciation? The genus, in Cuba, has a density of ca. one species per 27 km2. In the remaining 20.3 million km2 of the Neotropical region this density falls to roughly one species per 2.5 million km2 (Kempf's 1975 classification) or to one species per 3.8 million km2 (Longino's 1998 classification). These figures need no statistical treatment to convince about the difference between the Cuban and the remaining Neotropical fauna.

D’Esquivel et al (2017) - Small to median ants inhabiting a range of environments, such as tropical wet or dry forests, savannas and semi-arid regions with xerophytic vegetation, being collected up to 2000m altitude. Their colonies, the smallest for population size in the Formicidae family, with about 3-4 individuals for some species, live in natural cavities in the soil, the leaf-litter or the tree trunks (Delabie et al., 2000; Jahyny, unpub. data). They are specialist-predator feeding on polyxenid millipedes (Diplopoda: Penicillata) (Brandão et al., 1991; Jahyny et al., 2008; Rabeling et al. 2012).

Small (TL 3.3–5.0 mm; Kempf, 1975) ants with the standard characters of Ponerini except that the antennal sockets are very widely separated by a broad posterior extension of the clypeus. Mandibles pitchfork-like with three very long and attenuated teeth, the mandibular articulations located on narrow anterolateral projections of the head. Clypeus generally greatly reduced except for a broad posterior extension. Frontal lobes of moderate size, semi-vertical, reaching or surpassing the anterior clypeal margin. Eyes large and very convex, located anterior of head midline. Metanotal groove absent to shallowly impressed. Propodeal dorsum moderately narrowed but rounded. Propodeal spiracles round. Metapleural gland orifice with a U-shaped cuticular flange posteriorly and a shallow groove laterally. Metatibial spur formula (1p). Petiole ranging from a thick broad scale with sharp lateral margins to a cuboidal node. Gaster with only a weak constriction between pre- and postsclerites of A4. Pretergite of A4 with a distinct stridulitrum. Head and body with variable sculpturing, ranging from smooth and shiny to finely shagreened to finely punctate and rugulose. Head and body with scattered pilosity and no pubescence. Color black.