Found throughout the world and represented by more than 170 species. Despite a recent revision that covered regions where there are a large number of species (Bolton and Fisher 2011 for the West Palaearctic and Afrotropical regions) the unremarkable morphology of most species often leads to difficulty in determining samples to species. Hypoponera are small ants that are generally found at or just under the ground surface. They nest under or in rotten wood, in the leaf litter, and in the soil. Most species are assumed to be predators of other arthropods, although direct evidence for this is relatively scant (Levieux, 1983). Some species are widespread tramp species. Several are known to have highly unusual reproductive strategies, including the presence of combative ergatoid males.

Schmidt and Shattuck (2014) - Hypoponera is morphologically the most generalized of the cryptobiotic ponerine genera, as it lacks any obvious autapomorphies. The genus also shows greater variability than most ponerine genera in many characters typically useful for generic diagnosis. Despite these complications, Hypoponera workers are generally diagnosable by the following combination of characters:

Schmidt and Shattuck (2014) - Hypoponera is the most cosmopolitan of all ponerine genera, occurring on every continent except Antarctica and extending into many temperate regions. Endemic species are apparently absent from many island groups (e.g., Polynesia), but several widespread tramp species have become established even in these locations (Taylor, 1967; Ingram et al., 2006).

Schmidt and Shattuck (2014) - Hypoponera is probably the most common and diverse ponerine genus worldwide and is consistently one of the most abundant and diverse ant genera collected in quantitative surveys of leaf litter and soil ant communities, especially in the tropics (e.g., Argentina: Theunis et al., 2005; Australia: King et al., 1998; Brazil: Soares & Schoereder, 2001; Costa Rica: Longino et al., 2002; Ghana: Belshaw & Bolton, 1994; Guyana: LaPolla et al., 2007; Madagascar: Fisher, 1999; Melanesia and New Caledonia: Wilson, 1976; generally: Ward, 2000). Though Leptogenys currently boasts many more described species than Hypoponera, the true species diversity of Hypoponera is probably grossly underestimated and may rival or exceed that of Leptogenys given their cryptobiotic habits, lack of revisionary taxonomic work, and the likely occurrence of cryptic species complexes. Fisher (1999) found that Hypoponera diversity was a good surrogate for total ant diversity in forests in eastern Madagascar, indicating that it may be a useful indicator genus for faunal surveys. 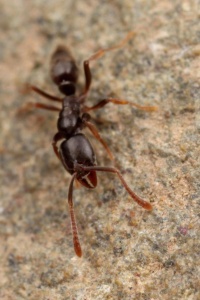 Except for their unusual reproductive and larval behaviors (see below), surprisingly little work has been done on the ecology and behavior of Hypoponera. They are cryptobiotic, nesting in soil, under rocks, or in rotting wood, and foraging there or in leaf litter and other sheltered microhabitats (Wilson, 1958c; Onoyama, 1989; Yamauchi et al., 1996; Terayama, 1999; Foitzik et al., 2002; pers. obs.). Reports on the sizes of Hypoponera colonies are scarce, but colonies usually have fewer than 100 workers and only occasionally more (e.g., Wilson, 1958c; Villet et al., 1991; Peeters & Hölldobler, 1992; Peeters, 1993; Hashimoto et al., 1995; Yamauchi et al., 1996; Foitzik et al., 2002). They are typically reported to be generalist predators of small arthropods or scavengers (e.g., Wilson, 1958c; Agbogba, 1984; Escoubas et al., 1987; Brown, 2000; Seifert, 2004), though some species probably have stricter diets (e.g., one African species is reported to feed principally on collembolans; Lévieux, 1983). Foraging is probably generally performed by solitary workers, though at least one species is known to recruit nestmates to help dismember large prey (Agbogba, 1984). Hölldobler (1985) observed tandem running in an unidentified Hypoponera species but did not clarify its purpose.

The behavior of ergatoid Hypoponera males is both unusual and varied within the genus. At one extreme is Hypoponera punctatissima, whose males are dimorphic, the minor males mimicking females and utilizing a sneaky mating strategy, and the major males fighting and killing one another to secure mating opportunities (Yamauchi et al., 1996). Similar fighting was also observed among ergatoid males of Hypoponera punctatissima, though it is unclear whether they are dimorphic (Hamilton, 1979). Ergatoid males of H. nubatama do not fight directly but instead kill other males before they eclose from their cocoon (Yamauchi et al., 2001). Finally, ergatoid males of H. opacior do not fight but monopolize their mates by copulating with them for up to 40 hours, the longest copulations ever observed in ants (Foitzik et al., 2002). Given the presence of ergatoid males in virtually all tramp species of Hypoponera, Taylor (1967) hypothesized that the consequent simplification of the mating process in these species may facilitate their spread.

Hypoponera larvae have two pairs of sticky tubercles, with which they attach to the walls and ceilings of their nest cavities (Taylor, 1967; Escoubas et al., 1987; Peeters & Hölldobler, 1992). This may assist the larvae in feeding or may function to protect the larvae from excess humidity (Peeters & Hölldobler, 1992), but may also function to separate larvae sufficiently to prevent larval cannibalism, which has been observed in at least three species (Rüger et al., 2008).

Monomorphic workers. Queens are winged and distinctive in many Hypoponera. Intermediate ergatoid (worker-like) forms are also known for some species. Males are the least well known of all the castes but most species apparently only produce winged males. Ergatoid males have been found in a limited number of species.

Schmidt and Shattuck (2014) - Santschi (1938) erected Hypoponera as a subgenus of Ponera to house those Ponera species with shallow metanotal grooves. Taylor (1967) raised Hypoponera to full genus status, recognized that Santschi’s definition of the subgenus was phylogenetically meaningless, and instead differentiated the genus from Ponera by its palp formula (1,1 in Hypoponera), absence of an anterior fenestra or posterior teeth in the subpetiolar process, several male characters, and the number of sticky tubercles on the larvae. Hypoponera workers are superficially quite similar to those of Ponera, but they are distantly separated in Schmidt’s (2013) molecular phylogeny of the Ponerinae, suggesting that their morphological similarities are the result of convergence due to their similar cryptobiotic lifestyles. Hypoponera is phylogenetically distinct from other major lineages of Ponerini, diverging from its closest relative (probably the Plectroctena group) quite early in the radiation of the tribe.

Given the absence of strong autapomorphies for the genus and its relatively high morphological diversity, it is possible that Hypoponera as presently defined is non-monophyletic. Schmidt (2013) included in his molecular phylogeny several Hypoponera species presenting maximum morphological diversity from across the range of the genus, to begin to test the monophyly of the genus. To his surprise these species formed a tight clade with strong phylogenetic support. Even more surprising was that three sympatric Hypoponera species from Malaysia, which he included in the phylogeny because they are morphologically quite divergent from one another (to the point that he expected them all to represent distinct genera) turned out to be very closely related to one another, indicating an impressive recent adaptive radiation.

Schmidt and Shattuck (2014) - Very small to small (TL 1.4–5.5 mm) slender to robust ants with the standard characters of Ponerini. Mandibles triangular, with a variable number of teeth and without a distinct basal groove (though a shallow pit or vestigial groove may be present). Frontal lobes small and closely approximated. Apical segments of antennae sometimes enlarged into a distinct club. Eyes sometimes absent, but usually present, very small and located far anterior on the sides of the head. Mesopleuron usually not divided by a transverse groove, though occasionally faintly present. Metanotal groove usually present and shallowly depressed, though sometimes reduced to a suture, and rarely absent altogether. Propodeum usually moderately to strongly narrowed dorsally, but occasionally broad. Propodeal spiracles round. Metatibial spur formula (1p). Petiole squamiform. Subpetiolar process a rounded lobe, without paired teeth posteriorly and only rarely with an anterior fenestra. Gaster with a weak to strong girdling constriction between pre- and postsclerites of A4. Stridulitrum sometimes present on pretergite of A4. Head and body occasionally glossy, usually finely punctate, sometimes lightly striate on the sides of the mesosoma. Head and body with sparse to scattered pilosity and usually a dense pubescence. Color variable, testaceous to black.

Bolton and Fisher (2011) - Characters as listed for workers except for worker characters 6, 8, 9; with the following differences.

Characters as conspecific worker but always with much larger eyes (7–30 ommatidia in Afrotropical species in which workers have 0–7 ommatidia), but without ocelli; often with a shorter petiole node in profile and a somewhat enlarged gaster; sometimes with a gyne-like transverse sulcus on mesopleuron. One ergatoid queen of Hypoponera punctatissima was dissected: a spermatheca was present and the ovaries were enlarged, though much smaller than in the gyne (see also Yamauchi, et al. (1996)).

At first glance ergatoid males can easily be mistaken for workers, especially as the characteristic male genitalia are retractile and may be almost entirely concealed within the body. The ergatoid male of H. eduardi is monomorphic, with reduced mandibles, 13-segmented antennae and small eyes present. The ergatoid male of punctatissima is dimorphic. Both morphs have worker-like mandibles and head shape and 12-segmented antennae, but the larger morph is brown and has small eyes, while the smaller morph is yellow and lacks eyes. Ergatoid males of ragusai have not yet been found in the Afrotropical region, but specimens from the U.S.A. have a worker-like head and mandibles, as punctatissima, but possess 13-segmented antennae.

Also see a general description of Hypoponera males in Taylor (1967) and descriptions of ergatoid males in Yamauchi et al. (1996).