Simopelta is a moderate-sized genus (more than 20 described species) restricted to the Neotropics. These ants are notable for their army ant-like lifestyles, including apparently obligate group predation on other ants, reproduction by dichthadiiform (ergatoid) queens, and nomadism. Behavior and other natural history notes come from field observations by Longino for the species Simopelta andersoni. Kronauer et al. (2010) studied colony structure in Simopelta pergandei and Simopelta pentadentata.

Schmidt and Shattuck (2014), Fernandes et al (2015) - Simopelta workers can be readily diagnosed by the following combination of characters: subtriangular mandibles; raised clypeal rostrum; eyes small or absent, when present often consisting of only a single enlarged ommatidium; metapleural gland orifice with a posterior U-shaped lip; usually an absence of stout traction setae on the middle and hind legs (present in S. anomma); and usually with prominent arolia (highly reduced in S. anomma). The clypeal rostrum is autapomorphic within Ponerini. Some Simopelta species (Simopelta pergandei and its relatives) superficially resemble Feroponera and some Cryptopone, but differ from them in lacking traction setae on the legs, among other differences.

Mackay and Mackay (2008) - Simopelta is interesting biologically. It is one of the few Ponerinae that lay an odor trail (Gotwald and Brown, 1967). It is one of the few genera of Ponerinae to exhibit group raiding behavior (Hermann, 1968), which is a definite army ant like behavior (Wilson, 1958; Djiéto-Lordon et al., 2001; Miyata et al., 2003), but also similar to that of the mass foraging Leptogenys species of the diminuta complex. Wheeler (1935) suggested that Simopelta may feed on small, soft-bodied insect larvae, or subterranean termites. Simopelta oculata is a predator on other ants, especially Pheidole species. The nest population may reach 1000 or more workers, and probably does not exceed 2000 (Gotwald and Brown, 1966). There is generally only a single female, but one colony also had a callow queen (Borgmeier, 1950), which suggests that Simopelta reproduces by swarming (Gotwald and Brown, 1966). Most specimens are collected from litter or soil extractions, although they are occasionally collected in hollow twigs or branches, especially those laying on the soil surface. It may produce brood in phases, as do the army ants (Ravary and Jaisson, 2002).

Schmidt and Shattuck (2014) - Little to no focused research has been performed on the habits of Simopelta, but based on morphology and on anecdotal observations it appears that Simopelta has converged extensively on a true army ant lifestyle, much more so than have the mass termite raiders Megaponera, the Leptogenys processionalis species group, and the Neoponera laevigata species group. Morphologically, the reduced eyes of the workers and the dichthadiiform queens (wingless and with greatly distended gasters) are both convergent with ecitonine army ants, and the behavior of individual workers is reportedly much like that of army ants (Gotwald & Brown, 1967).

The additional similarities between Simopelta and army ants are striking. Simopelta colonies are fairly large by ponerine standards, with estimates of 1,000 to 2,000 workers (Gotwald & Brown, 1967). Foraging occurs during the day, usually on the ground and arboreally (Longino, 2013), though the morphological structure of a newly discovered Costa Rican species suggests that it is purely hypogeic (Longino, 2013). Simopelta workers form large raiding columns of up to several hundred individuals, at least, and these raiding workers apparently follow an odor trail (Gotwald & Brown, 1967). Anecdotal accounts suggest that they are specialist predators of both the adults and brood of other ants, particularly Pheidole (Gotwald & Brown, 1967; Longino, 2013). Simopelta construct both temporary nests and long-term nests, which together with the dichthadiiform nature of the queens, the uniform age of the brood (indicating pulses of reproduction), and observations of colony emigrations suggest a nomadic lifestyle with an alternation between migratory and stationary colony phases, as in army ants (Borgmeier, 1950; Gotwald & Brown, 1967; Brady, 2003; Longino, 2013). Colony reproduction apparently occurs via budding, as in army ants (Gotwald & Brown, 1967). Longino (2013) provides numerous interesting field accounts of Simopelta in Costa Rica.

Mackay and Mackay (2008) - Mackay and Mackay (2008) - Mann described Simopelta as a subgenus of Belonopelta in 1922. Wheeler raised it to generic rank in 1935, where it remained until Baroni Urbani considered it a synonym of Belonopelta in 1975. Hölldobler and Wilson revived it from synonymy in 1990, and it has been considered as a valid genus since (Bolton, 1995). There have been several revisions of the genus (Wheeler, 1935; Gotwald and Brown, 1966; Baroni-Urbani, 1975).

Schmidt and Shattuck (2014) - Small (TL 2.1–4.9 mm) slender ants with the standard characters of Ponerini. Mandibles subtriangular, with a weak basal angle, a pair of apical teeth and variable dentition proximally, and no basal groove. Median portion of clypeus forming a raised triangular rostrum which projects past the anterior margin of the clypeus, sometimes with a short medial tooth. Frontal lobes small and closely approximated. Eyes small, often reduced to a single enlarged ommatidium, located on the sides of the head anterior of the head midline. Metanotal groove usually only shallowly impressed, though the mesosomal profile is often distinctly discontinuous due to a gradual posterior depression of the mesonotum. Mesonotum and propodeum much narrower than the pronotum, but the propodeum itself not narrowing significantly dorsally. Propodeal spiracles small and round. Metapleural gland orifice with a posterior U-shaped cuticular lip and a lateral groove. Metatibial spur formula (1p). Arolia prominent. Petiole nodiform to nearly squamiform. Gaster with a weak to strong girdling constriction between pre- and postsclerites of A4. Head, mesosoma and petiole usually heavily punctate, striate, or rugoreticulate, the gaster shiny or lightly punctate. Head and body with sparse to scattered pilosity and fairly light pubescence. Color variable, orange to black. Note: An undescribed hypogeic Simopelta species from Costa Rica (Longino, 2013) differs from this general description in its testaceous coloration, clubbed antennae, presence of stout traction setae on the mesotibiae, and complete absence of eyes. 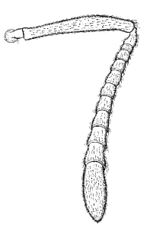 Mackay and Mackay (2008) - The mandible of the worker has two apical teeth, which are approximately equal in size, and have acute tips. In most cases, there is a long diastema, or toothless gap, followed by a single basal tooth. Some species have three teeth, some four or five distinct teeth and one species has approximately six teeth. The species that have three or four teeth may have tiny denticles in the diastema. The tips of the teeth are often truncated. The maxillary palps are composed of two segments, the labial palps of two or three segments. The antenna has 12 segments, without a defined club (Figure 1), but the segments are usually larger toward the apex. The frontal lobes form a raised platform, fused with the medial part of the clypeus, which overhangs the remainder of the clypeus, or the apron (Figure 14). This medial part of the clypeus is usually angulate, and may even form a spine, which may be reduced in some members of a series or possibly broken. The eyes are small, and apparently composed of a single ommatidium in the workers.

The mesosoma of the worker is elongated, and the anterior edge of the mesonotum is often lower than the posterior edge of the pronotum. The dorsal outline of the mesosoma is usually broadly concave; the metanotal suture is usually distinct and impressed. The propodeum is usually higher than the mesonotum and broadly rounded posteriorly (without spines). The anterior and posterior faces of the petiole are usually straight and vertical, and the apex may form a horizontal face. The subpetiolar process is well developed, and often triangular, with a concave posterior face, but may be quadrate. Each of the tibiae has a single, pectinate spur.

Fine, silver hairs are present on most surfaces of the worker, and may be appressed, decumbent, or even erect. Appressed, fine pubescence is sparse.

The workers of most species are coarsely sculptured, often with poorly defined striae or rugulae, which may be transverse on the dorsum of the head, as well as the dorsum of the mesosoma. The petiole generally has horizontal striae. The gaster is usually smooth and glossy. There is some variation in the sculpturing of the species, which is helpful in separating them.

Most workers are dark reddish-brown to black, occasionally the workers are medium brown to nearly yellow.

Mackay and Mackay (2008) - The females are known from only 3 species (Simopelta oculata, Simopelta pergandei, and Simopelta transversa). Based on these three species, they are very unusual specimens, and do not resemble the workers, but are only slightly larger. They are dichthadiiform (Figure 2), with sickle-shaped mandibles (Figure 3), and broad, subquadrate heads, with reduced eyes (only slightly larger than the eyes of the workers), the ocelli are absent, or only the anterior ocellus is present, the antennae are shorter than those of the worker (both scape and funicular 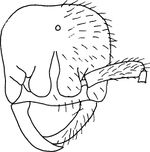 segments). The mesosoma is very unusual, with both the scutum (Figure 2) and scutellum (reduced in S. pergandei) being swollen and convex, when the mesosoma is viewed in profile (Figure 2). They are wingless. The petiole is narrow in profile, and greatly widened in frontal view (Figure 2), wider than the mesosoma, with a median sulcus, an emargination, or at least somewhat concave medially. The gaster is relatively large. The females are much less coarsely sculptured than the corresponding worker.

Schmidt and Shattuck (2014) - Wingless and dichthadiiform, generally morphologically simplified relative to conspecific workers but with an enlarged petiole and gaster. See more detailed descriptions in Borgmeier (1950) and Gotwald & Brown (1967). 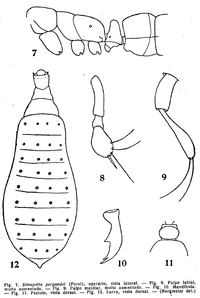 Mackay and Mackay (2008) - The larvae of Simopelta (based on Simopelta pergandei and two unidentified species) can be ranked with those of Leptanilla and Proceratium as being the most aberrant and bizarre among the ants (Wheeler and Wheeler, 1957, 1964, 1986, 1989). They appear to be somewhat dipterous, and the presence of numerous tubercles appears to be the only resemblance they have to other members of the tribe Ponerini. They are unique among the known ant larvae in the general shape of the body and shape of the thorax in particular, the partial retractability of the prothorax, complete absence of hairs, and the shape and position of the mandibles (Wheeler and Wheeler, 1957).