Myrmecocystus testaceus begin preparing for foraging shortly before sunset, gathering in abundance at the nest entrance. Within a few minutes of sunset the workers exit in a rush of many workers, forming a notable mass exodus from the nest.

A member of the testaceus group of the Myrmecoystus subgenus Myrmecocystus .

Snelling (1976): Leonard (1911) observed this species (reported as mexicanus mojave) at Pt. Loma, California. According to his report the species is nocturnal, tends aphids and obtains nectar directly from several plants. Aestivation for a period of several days during exceptionally hot weather was reported. Leonard also obtained repletes from nests at Pt. Loma. Wheeler (1912) noted that nests were found near Claremont, Calif., in hard, dry soil, along roads and paths, that entrances 1/4" x 3/4" in diameter were surmounted by craters from 4"-8" in diameter.

Rather than nocturnal, as reported by Leonard, this ant is probably better characterized as crepuscular. Workers begin to assemble at the nest entrance about 15-20 minutes prior to sunset and may completely block the entrance with their heads. Foraging begins within a few minutes of sundown and immediately before the onset of active foraging the interior of the crateriform tumulus may become completely blanketed with ants. At the proper moment, the mass of ants departs from the crater, as nearly simultaneously as possible, each ant proceeding individually. Within a few minutes after the exodus begins, the area around the nest, for up to a meter, is virtually covered with ants. Dispersal into surrounding areas and vegetation, however, is rapid and at a distance of four meters the ants are widely scattered.

For about an hour after this initial exodus of foragers, individual ants continue to leave the nest at irregular intervals. The total number of ants departing during this hour is much less than that of the initial group. Within about 15 min. of the onset of foraging activities, workers begin to return and thus continue for about two, rarely as many as four, hours. Apparently all individuals who will be foraging depart within the first hour following onset of activities, and all return within four hours.

During the period of foraging activity, non-foraging workers may be engaged in excavation. Soil particles are carried to the surface. Since this species often nests in areas of clayey soil nearly devoid of small pebbles, it follows that the crateriform tumuli do not always consist of such material. In the chaparral of southern California the tumuli are built up of soil particles which are aggregated into small pellets. Such pellets are carried to the top of the crater and dropped over the side. These pellets disintegrate fairly rapidly through weathering and must constantly be replaced. In areas in which the soil includes coarse sand and small pebbles, the tumuli are constructed of these materials and are less subject to wind and rain damage.

The sexual forms are present in the nests in southern California in early spring and mid autumn, and fly following rains during these seasons. The flights take place in late afternoon. Shortly before the flight, workers emerge from the nest in large numbers and run out over an area up to one meter from the nest. Up to fifteen minutes before the flight, males emerge sporadically; some run about on the surface near the nest, a few take flight and alight on vegetation up to ten meters from the nest. The exit of the females is preceded by another outpouring of workers and more males. Females emerge and take flight, usually from the rim of the crater. Mating takes place in the air or on vegetation near the nest.

In more northern areas the males and females are present during late spring and early summer, less commonly during the fall months. According to Cole (l934b) alates are present throughout June and July near Twin Falls, Idaho.

Unless otherwise noted the text for the remainder of this section is reported from the publication that includes the original description. This species has had an unfortunate taxonomic history. Emery described Myrmecocystus testaceus as a variety of melliger, rather than of mexicanus, to which it is closely related and which it greatly resembles. A few lines before this description he had enumerated the characteristic differences in mandibular dentition, eye size and color which separate the two species, so it may not be argued that he was ignorant of these differences. Emery's original error is, however, no excuse for what followed.

When he treated Myrmecocystus in 1908, Wheeler had a cotype of testaceus, now in the AMNH; the specimen is well preserved and clearly exhibits the essential characteristics of testaceus. He assigned to this name a few specimens from Claremont. The Claremont specimens are uniformly reddish, not at all yellowish as in the type, the eyes are small and the mandibles possess seven teeth. His reasons for assuming these Claremont specimens to be conspecific with the cotype of testaceus were never stated. Even more remarkably, he regarded testaceus as a variety of semirufus, also described by Emery from San Jacinto, on the basis of supposed intermediate specimens taken at Phoenix, Arizona and Needles, California. That specimens taken several hundred miles from the only known, at that time, area of sympatry could be intermediates is difficult to accept.

The difficulties were compounded, for in the same paper Wheeler described mojave as a subspecies of mexicanus. The type locality of mojave is Ontario, California. While correctly recognizing that this ant was related to mexicanus, Wheeler did not recognize that it was, in fact, conspecific with the testaceus cotype.

Material identified by Wheeler during subsequent years in various collections indicate that he apparently never realized the error. Cole (1936) described idahoensis as a variety of mexicanus from Idaho. This name was recognized by Creighton (1950) to be the same as mojave and was correctly synonymized. Creighton seems not to have studied the testaceus cotype; on the basis of the supposed intermediates between semirufus and testaceus, he placed testaceus in synonymy.

I have seen the cotype of testaceus; it is certainly conspecific with Wheeler's mojave, and not at all related to semirufus. At the same time, the uniformly reddish ant established by Wheeler as testaceus was found not to be conspecific with true testaceus. This species I described (1971) as wheeleri.

This ant most closely resembles mexicanus but is smaller (HW>1.5 mm in largest specimens) and more robust. In testaceus the pronotal width is 0.35-0.46 times Weber's Length, which barely overlaps the range of mexicanus (PW 0.30-0.37 x WL). The metanotum is distinctly impressed in mexicanus, not at all in testaceus. The juncture of the basal and posterior faces of the propodeum is sharply rounded or subangulate in testaceus and the propodeum is higher than long. 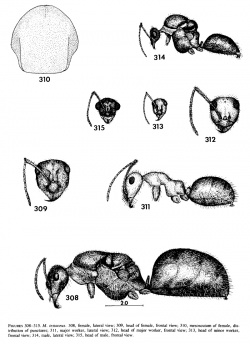 Vestiture: Pubescence about as described for worker, but dense on fourth tergum, longer on head.

Cephalic hairs about as described for worker, longest occipital hairs distinctly less than 0.5 x MOD. Scutum and scutellum with scattered erect hairs, up to 0.20 mm, arising from coarse punctures; pleura with scattered longer hairs. Propodeum with numerous shorter hairs (less than 0.15 mm) on upper half. Petiolar scale with numerous erect hairs along sides and crest. Discs of terga with sparse subdecumbent to erect hairs, progressively longer on succeeding segments; sterna with hairs sparser, longer. Appendages with numerous erect hairs, including dorsa of all femora; inner face of fore femur with few or no erect hairs, when present they are fine and restricted to apical half or less. Wings without fringe hairs on apical or posterior margins.

Vestiture: Erect hairs sparse on head, those of occiput short (up to 0.10 mm), much less than 0.5 x MOD; hairs of malar area shorter than those of occiput. Longest scutal hairs about equal to those of occiput; scutellar hairs longer, up to 0.16 mm; pleural hairs sparse, about equal to those of scutum. Propodeum with scattered short, erect hairs on basal and lateral faces. Petiolar node with scattered short, erect hairs on sides and crest. Terga with sparse subdecumbent to erect hairs, longer on succeeding segments, those on disc of second segment up to 0.13 mm; sterna with hairs longer. Appendages with abundant erect hairs. Wings without fringe hairs on apical or posterior margins.