Tolerant of a wide range of soil types, unlike many of its congeners, and shows a marked preference for nesting in patches of bare soil.

A member of the kennedyi group of the Myrmecoystus subgenus Endiodioctes.

Known habitats for Myrmecocystus kennedyi range from Sagebrush Steppe and Great Basin Sagebrush in the north to Creosote bush-Bur sage and Palo verde-Cactus shrub desert in the south. Cole (l934a) noted that this ant (as melliger semirufus) is found in "... all parts of the desert region irrespective of the soil type ..." Since the present interpretation of kennedyi is more restrictive than previous interpretations, it follows that this no longer is strictly true. Thus, while kennedyi does exhibit a broad spectrum of nest sites, there is a decided preference for well-drained, coarse desert sands.

Snelling (1976) - Cole (1934b) found that in southern Idaho- nests were found in bare sandy areas between shrubs on small stable sand dunes. My own experiences parallel this observation: kennedyi tends to locate its nests in bare areas away from vegetation. Areas of dense grass, especially, seem to be avoided.

Nest tumuli of fully mature colonies may be as much as 20 cm in diameter, but rarely more than 6 cm high. These tumuli are usually in the form of very regular craters.

Wheeler (1908) reported finding workers tending pseudococcids (Orthezia sp.) near Needles, Calif. The pseudococcid Phenacoccus gossypii Townsend and Cockerell was found to be tended by kennedyi, near Gray's Well, Calif. (McKenzie, 1967). Shields (1973) found that larvae of the lycaenid, Philotes rita pallescens, were being tended by this ant near Currant, Nev. Specimens collected by the author south of Ravendale, Calif., were soliciting honeydew from an unidentified aphid feeding on Lupinus. In addition to soliciting honeydew from other insects, kennedyi very actively gathers nectar directly from floral and extra floral nectaries.

In addition to the above food sources, this species is also a general scavenger. The workers forage actively during the hot midday hours and secure large quantities of dead arthropods. Some are freshly killed and I have seen this species attack living insects. Those attacks which I have witnessed from inception are all similar to the following incident, observed near Mecca, Calif. on 13 Apr. 1963.

1319 — About 1.25 m from nest and another ant joined the attack, grasping first the right fore tarsus, but shaken off, managed firm hold on right second tarsus.

1320 — All ants now working concertedly to stretch prey and at same time move toward nest.

1321 — Two more ants, one on right second tarsus, one grasped side of abdomen in front of spinnerets.

1324 — About 0.5 m from nest; six or seven more ants, but they continually change holds on spider, now effectively "spread-eagled".

1328 — Spider carried down nest entrance by a mass of ants.

On another occasion a sphecid wasp, Ammophila sp., had "cached" a paralyzed lepidopteran larva while opening up her burrow. The caterpillar was discovered by a kennedyi worker which began to drag it away. The wasp, upon discovering the removal of her prey began a search, found it and began to drag it back toward the burrow. She was, however, driven off by the arrival of several more ants. Such "brigandage" may be fairly common.

Little is known about predation on honey ants by other animals. However, that horned lizards may occasionally prey on Myrmecocystus is indicated by an unpublished record before me. Mr. Lan Lester, Natural History Museum of Los Angeles County, found Phrynosoma platyrhinos feeding on kennedyi workers near Inyokern, Calif.

Creighton (1950) placed melliger semirufa var. testacea, sensu Wheeler (1908) and subsequent authors, in the synonymy of semirufa (i.e .. kennedyi). Since the ant which Emery described as testacea is actually a senior synonym of mojave of the nominate subgenus, Snelling (1971) renamed testacea auctorum as wheeleri. Although related and superficially similar, there are numerous features by which kennedyi and wheeleri are separable, as discussed under the latter species.

The cephalic characters of this species show several interesting clinal variations. Gross head size averages larger in northern populations. While northern and southern populations both include the full range of variation, measurements from southern samples tend to be distributed in the lower half of the regression zone.

Overall eye size is of interest, too. Eye length increases by about 6% between the northern extremity of the range and the Mexican border. Below the border, there are too few samples to indicate a clear trend, but there appears to be a reversal. Thus, specimens from Idaho have an average EL of 0.244 mm, those from southern California average 0.267 mm and those from the Punta Penasco area of Sonora average 0.247 mm. The similar, and closely related nequazcatl has an average EL of 0.267 mm. The apparently reversed cline of kennedyi may be an example of "character displacement". However, until sympatric populations of the two species, if such exist, can be studied this phenomenon, as described by Brown and Wilson (1956) is not definitely demonstrated. 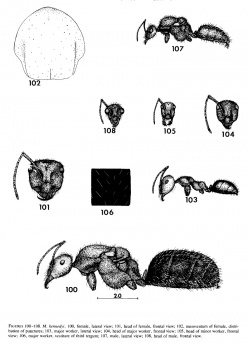 Malar area with 1-6 erect hairs visible in frontal view; longest occipital hairs exceeding 0.5 x MOD. Longest mesoscutal hairs subequal to those of occiput; longest scutellar hairs exceeding MOD; longest pleural hairs shorter than those of scutellum. Propodeum with erect hairs about equal to those of mesoscutum present on basal and lateral faces. Petiole with sparse short, erect hairs on crest and sides. Terga with numerous short, fine, erect hairs discally, longer on succeeding segments and on sterna. Appendages with numerous fully decumbent to erect, short, fine hairs, except on posterior surface of scape and inner surface of fore femur, where subdecumbent to suberect pubescence is present. Wings without marginal fringes.

Pilosity short on front and vertex, a single hair in front of each lateral ocellus longer, exceeding 0.5 x MOD; hairs longer on side of head. Mesoscutal hairs numerous, stiff, longest less than MOD; some scutellar hairs a little longer; pleural hairs abundant, stiff, equal to those of scutum; propodeum with a few longer hairs on each side. Petiole with short erect hairs on sides and crest. Gaster with sparse long hairs. Scape, femora and tibiae with abundant, short, subdecumbent to erect hairs on all surfaces. Wings without fringe hairs on apical or posterior margins.