The biology of this species has not been studied in any detail.

Worker - Scape without conspicuous erect hairs; propodeum with cluster of fully erect hairs at juncture of basal and posterior faces; erect pronotal hairs with blunt apices; hind femur without erect hairs on flexor surface and few or none on extensor surface; petiolar scale not strongly compressed. Female - Scape with few or no erect hairs; mesoscutum largely irnpunctate in median area, the scattered punctures much coarser than those of the densely and uniformly punctate scutellum; frontal lobe finely, densely and uniformly punctate.

Of far greater utility is the fact that the dorsum of the propodeum of yuma always has six or more fully erect hairs, while none are present here in lugubris. Both possess a number of fully erect hairs on the pronotum and mesonotum. The punctures of the frontal lobes are finer and closer in yuma than in lugubris, while in the latter species the discal hairs of the first tergum are shorter and stiffer. (Snelling 1976)

All collections of this species have been made in Creosote bush and Creosote bush-Bur sage Desert and at elevations ranging from sea level to 2000 feet.

Snelling (1976) - Wheeler (1912) observed that nests at the type locality were surmounted by craters three to four inches in diameter and that remains of dead insects were abundant around the edges of the craters. From the latter he surmised the ant to be predatory. Nests are usually, if not always, located in sand, either coarse or fine. Craters seem not to exceed 10.5 cm in diameter. Bits of twigs and leaves are sometimes found about the margins of the tumulus, as noted by Wheeler, but whether these were placed there by the ants or wind-blown is not known.

Little is known of the foraging behavior of this ant. Wheeler believed the species to be predatory. Since I have observed workers visiting flowers and soliciting both aphids and pseudococcids for honeydew, it would appear that the food gathering habits do not differ materially from those of other Eremnocystus. I have observed workers foraging both during early morning and late afternoon.

Snelling (1976) - Creighton (1956) synonymized this species with Myrmecocystus lugubris based on a study of type material of both forms and of samples which he collected in Arizona and California in 1952. He carefully examined the separatory characters utilized by Wheeler (1912) and Creighton (1950) and found them worthless. While I agree that the traditional method of separation is ineffectual, I cannot agree that the two ants are conspecific. Had Creighton had available to him females from the colonies he collected he doubtless would have realized that he had four species rather than one. With the Creighton material before me, it is evident that, in addition to lugubris and yuma, he also had samples of Myrmecocystus creightoni and Myrmecocystus tenuinodis. The recognition of these two latter species, prompted by female characteristics, enabled me to separate once again lugubris and yuma. 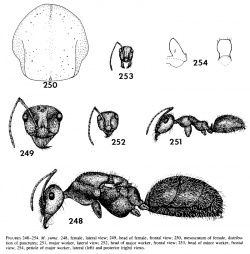 Head: Little broader than long or as broad as long, CI 92-100 (l00); a little shorter than scape, SI 103-120; in frontal view, sides slightly convex and a little narrowed toward mandibular insertions; occiput, in frontal view, evenly and gently convex from side to side, without lateral angulations. Eye small, barely longer than first flagellomere; OMD 1.37-1.57 (1.47) X EL.

Petiole: Scale erect, thick in profile, a little more than twice higher than thick, summit rounded; crest, in frontal view, flat, sometimes with a very weak, angular, median notch; from above, about twice wider than thick.

Petiole: In profile, distinctly narrowed above, crest narrow; in frontal view, sides a little convergent above, median emargination narrow, deep, angulate; from above, about three times wider than thick.

Wings not present on one specimen studied.