Workers of this ant look like diminutive Myrmecocystus placodops. The conspicuously smaller size of the major workers (HW > 1.7 mm) and the presence of numerous punctures on the face will easily separate Myrmecocystus koso from placodops.

This ant is much more difficult to separate from Myrmecocystus romainei, to which it appears to be closely related. In the workers of koso the punctures of the side of the face are sparser, coarser, and less well defined than in romainei; this part of the face is conspicuously shagreened. The pronotal hairs are longer and more slender than the mesonotal hairs in koso, about equally long and thick in romainei. In both species the third tergum is pubescent, but the fourth is bare in romainei, usually pubescent in koso, except in the smallest workers.

The female of koso is easily separated from that of romainei by the sparsely punctate basal terga. Males of both species are similar, but that of romainei has much shorter erect hairs on the occiput and mesoscutum.

Mountain ranges of northern Mojave Desert in California and Nevada.

The type locality is in an area of Pinon-Juniper Woodland; the allotype nest from an area of Shadscale Scrub. Cole (1966) recorded this ant, as comatus, from the Nevada Test Site. He found it to be "... well represented in the Grayia-Lycium, Larrea-Franseria, Atriplex-Kochia and mixed communities; scarce in the Coleogyne and Salsola communities; rare in Pinon-Juniper areas."

Nests are in open areas and are usually surmounted by a low, circular crater. A crater may be absent, but this may be due to wind and/or rain action. Cole observed that most colonies were very populous, which accords with my observations in the Panamint Range.

Nothing is known of the mating flights. Alates of both sexes were taken in the allotype colony in early November. These were mostly callows and many sexual pupae were present. The season was already approaching winter at that altitude and I do not believe a mating flight would occur so late in the season, but that the sexual forms would overwinter and fly in warm vernal weather. 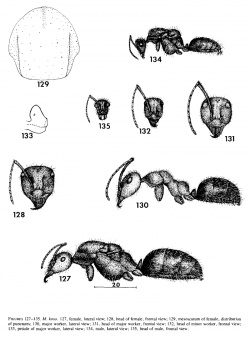 Petiole: In profile thick, cuneate, summit broad; crest, in front view, flat or slightly notched in middle; from above, about 1.5 x wider than thick.

Malar area with 12-18 long erect hairs visible in frontal view; facial hairs short, sparse between antennal socket and eye; longest occipital hairs subequal to MOD. Mesoscutum with numerous erect hairs, longest subequal to MOD; scutellar hairs longer, some exceeding MOD; pleural hairs numerous, mostly about 0.5-0.7 x MOD. Propodeum with numerous erect hairs at side and across base, similar to those of pleura. Petiole with long, slender hairs on sides and crest. Terga with numerous erect hairs, longest on disc of second segment about 0.78 x MOD, only slightly longer on apical segment. Scape, femora (including inner face of fore femur) and tibiae with abundant suberect to erect hairs. Fore wing without fringe hairs; hind wing with fringe hairs on basal half of posterior margin.

Petiole: In profile, thick, hardly cuneate and with broadly rounded summit to cuneate with slightly angulate summit; crest, in frontal view, entire or with trace of medium notch.

Named for the Koso Amerindian tribe, a Piute-Shoshonean group who formerly inhabited the Panamint Range. The word koso in Shoshoni means "Land of Fire", appropriately descriptive of the regions where this species occurs.