Creighton and Crandall (1954) excavated a Myrmecocystus placodops nest near Tucson, Arizona and found it was more than sixteen feet deep, containing over 1500 repletes and many hundreds of workers.

Ranging from Southern Cordgrass Prairie to Mesquite Savannah; the majority of records from this area are from Ceniza Shrub Grassland and Mesquite-Acacia Savannah. In the Panhandle region of Texas it occurs in Grama-Buffalo grass Grassland; in New Mexico records are from Creosote bush-Tarbush Grassland and in Arizona primarily in Creosote bush-Bur sage Grassland.

Snelling (1976) - The first report on this species was made by Wheeler (1908). The nest was stated to be "... always in stony soil, has the form of an obscure crater, with an irregular or arcuate and sometimes very large entrance (2-3.5 cm. in diameter) leading down obliquely into the soil. The main gallery thus formed breaks up at a depth of 20-30 cm. into short passages and flat, irregular chambers. The colonies are rather small, comprising hardly more than 300-500 individuals ... " He concluded that this is a " ... highly predaceous and carnivorous ant ... " which does not form repletes.

Parks (1929) observed placodops near San Antonio, Texas. A colony was exposed in a gravel pit near San Antonio. The nest was in excess of twelve feet deep; the first twelve feet were through a layer of coarse gravel and there were few galleries. At twelve feet it entered a layer of soft yellow sand; here chambers about 4" diameter x 3/8" high contained numerous repletes. He found that foragers obtain nectar from Condalia obovata Hook, Colubrina texensis Gray and Zizyphus obtusifolia Gray, all Rhamnaceae. Chambers containing grass seeds were stated to have been found; this requires confirmation, even though Parks further stated that workers were often seen carrying seeds. It was found that coyotes dig into the nests, presumably to get at the repletes.

A much more ambitious excavation is reported by Creighton and Crandall (1954). Working near Tucson, Arizona, Crandall excavated a nest to a depth of over sixteen feet and secured over 1500 repletes and many hundreds of workers, including numerous individuals with orbiculate heads. These two observations of excavated nests thoroughly dispel Wheeler's thesis that the form with orbiculate heads does not produce repletes and that the colonies are small and shallow.

This is a very active diurnal species. In the field it is a conspicuous ant as it runs across open areas. In bright sunlight it appears silvery or glittering white. Although it is actively predaceous on other small arthropods, the workers of placodops also visit flowers for nectar. In addition to the records cited by Parks (1929), I have seen foragers on Baccharis and Helianthus (Asteraceae).

Mackay and Mackay (2002) - Sagebrush (Rio Grande). Found in most habitats in arid environments, ranging from grasslands and shrub grassland to mesquite savannas and creosotebush/tarbush grassland. Workers forage diurnally, and feed on small arthropods and visit flowers for nectar. They nest in the soil in open areas, usually in rocky soil, with the maximum depth being 4.8 m. There are as many as 1500 repletes in a nest.

Snelling (1976) - The oldest name for this ant, Myrmecocystus placodops is based on a single worker major from an unknown Mexican locality. Although Wheeler (1908) clearly intended his name orbiceps to apply to this form, that name, due to an unfortunate type series selection, must become a synonym of Myrmecocystus mendax.

Large workers with the characteristic orbiculate head are easily separated from those of the related species Myrmecocystus melliger and Myrmecocystus mendax. Workers of all sizes are further separated from those of melliger by the much shorter pilosity. Large workers differ from those of short-haired mendax populations by the shorter hairs on the pronotum and second tergum, which are less than 0.5 x MOD. In sympatric or adjacent populations of mendax these hairs are 0.75, or more, x MOD. This usually applies to media and minor workers as well.

The wholly allopatric populations of mendax are much more similar to placodops but seem never to produce large workers with orbiculate heads. The erect hairs on the dorsum of the pronotum and on the second tergum, although short, are still longer than in placodops. The punctures of the frontal lobes are usually more regularly distributed and are sharper in mendax than in placodops . The latter species is somewhat variable and no great reliance may be placed in this character. Minor workers of these allopatric populations are essentially indistinguishable. There are no reliable features by which the sexual forms may be separated, based on the presently available, limited material. 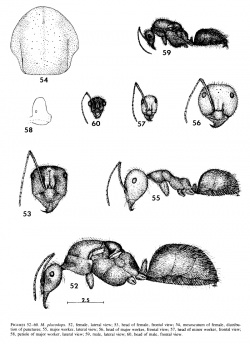 Head: In small workers longer than broad to broader than long in largest worker, CI 81-109 (109); shorter than scape in small workers to longer than scape in large workers, SI 93-135 (100); sides straight and barely convergent toward mandibular insertions in smallest workers; in largest workers, margins slightly divergent down to about level of antennal sockets then abruptly convergent toward mandibular insertions through a slight, but distinct angle at the level of the antennal sockets. Occiput, in frontal view, gently and evenly convex from side to side in small workers, flat or slightly concave in largest workers and broadly rounded at sides. Eye small, 0.92-1.17 x first flagellomere; OMD 1.50-2.29 (2.22) x EL. Mandible with seven teeth.

Malar area with 12+ erect, short hairs; longest occipital hairs 0.57 (small workers) to 0.70 (large workers) x MOD; a few short, erect hairs near inner eye margin; some hairs of vertex, occiput and malar area arising from coarse poriform punctures. Longest pronotal hairs no more than 0.50, usually 0.43-0.46 x MOD, hairs straight, often blunt or abruptly tapering at tip; mesonotal hairs usually about half as long as longest pronotal hairs; base and side of propodeum with numerous erect hairs which are shorter than longest pronotal hairs; side and crest of petiole with abundant erect hairs about equal to those of propodeum. Gaster with abundant erect hairs arising from coarse poriform punctures, those on disc of second tergum no more than 0.5 x MOD; hairs longer on apical segments and on sterna. Scape with numerous subdecumbent to erect, short hairs, except on inner face; all femora and tibiae with abundant short subdecumbent to erect hairs, longest on hind tibia about equal to minimum tibial thickness.

Vestiture: Cephalic pubescence general but sparse, densest on occiput and near base of mandible. Mesoscutum with pubescence very sparse, a little more abundant across anterior margin, conspicuous only on parapsis; general but sparse on scutellum. Pubescence longer, more abundant on pronotum, pleurae and propodeum, but partially obscuring surface only on latter. First four terga uniformly and densely pubescent.

Malar area with 15+ erect hairs, longest less than 0.5 x MOD; a few short hairs along inner eye margin, but area between eye and frontal lobe otherwise without erect hairs; longest occipital hairs about 0.6 x MOD. Mesoscutum with numerous erect hairs of nearly uniform length, longest about 0.5 x MOD. Scutellar hairs sparser than on scutum, longest about 0.8 x MOD. Longest anepisternal hairs about 0.8 x MOD, hairs sparse; katepisternum similar. Propodeum with hairs sparse on side, more abundant across base, longest about 0.6 x MOD. Petiole with numerous erect hairs on side and across crest. Gastric terga with numerous subdecumbent to suberect (a few fully erect, especially on first tergum) hairs, most of which, on first three terga, arise from pori form punctures; longest hairs on disc of second segment about 0.4 x MOD. Scape, all femoral and tibial surfaces with abundant short, suberect to erect hairs, longest on hind tibia about equal to minimum tibial thickness. Fore and hind wing without fringe hairs on apical or posterior margins. 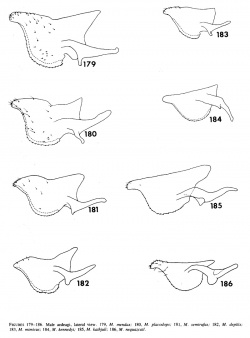 Described from a unique worker major from an unknown locality in Mexico; type in Musee d'Histoire Naturelle Genève.