A diurnal foraging species, with workers that are active scavengers of dead arthropods and predators of living arthropods.

Worker - HW 0.9-1.9 mm; malar area with numerous erect hairs; longest hairs of pronotum and disc of second tergum of large workers at least 0.6 x MOD, usually longer; long pronotal hairs gradually tapering to tip which is not conspicuously curled, but may be gently curved. Female - Apparently inseparable from that of melliger. Male - Apparently inseparable from those of Myrmecocystus melliger and Myrmecocystus placodops. (Snelling 1976)

Snelling (1976) - Wheeler (1908) reported briefly on the type colony of mendax. Sexual forms were found emerging and taking flight at 4:10 P. M. following a rain shower. On the following day the nest was excavated. Since repletes were not found, but insect fragments were found in some chambers, Wheeler concluded the species to be carnivorous.

Colonies in Colorado were reported on by Gregg (1963), who found that crateriform tumuli mayor may not be present. Nests may be situated beneath stones and there is apparently a preference for clay soils. He found the species at elevations ranging from 3600-6600', in the Upper Sonoran, mostly in Pinon-Cedar Woodland and Short Grass Prairie. Texas records include Pinon-Oak Savannah and Mesquite-Acacia Savannah. In other states it has been taken in Pinon-Juniper Woodland, Grama-Tobosa Shrubsteppe and Oak-Juniper Woodland.

The foraging behavior is much as that of Myrmecocystus melliger. Foraging is diurnal and the workers are active scavengers of dead arthropods and predators of living arthropods. Foragers of the colony observed near Wimberley, Texas, were seen to bring seven medium-sized (up to 25 mm) lepidopterous larvae in a period of 20 min. Other prey included one freshly killed muscoid fly, one dessicated muscoid and several fragments from an acridid, apparently recently dead. That workers also gather nectar and/or honeydew is attested by the presence of repletes in nests studied in Texas and Arizona.

Wheeler observed a mating flight of this species at Mt. Washington, Colorado on 18 July 1903, already mentioned above. A flight was observed by Creighton in the Baboquivari Mts., Arizona, on 26 July 1951. His notes state simply . . . "Both queens & males present. They take no notice of each other and take off singly. The usual excitement among the workers." There had been a thunder shower about noon of the day before.

Snelling (1976) - Although orbiceps has page priority over mendax, I have chosen, as first reviser, to continue usage of mendax. The name orbiceps has been the object of a singularly calamitous history and to resurrect it would only create further confusion. The name has been in synonymy for twenty years and is, in my opinion, best left there.

Wheeler (1908) described orbiceps as a subspecies of melliger characterized by the presence of workers with orbiculate heads and the absence of repletes. He had numerous specimens available from Texas, New Mexico and Arizona; the type series was from Bull Creek, near Austin, Texas. His description and figures leave no room for doubt as to the identity of the insect being described. On a subsequent page of the same paper mendax was adequately described, also as a subspecies of melliger.

In the years following, the concepts of these forms remained fairly consistent although Creighton (1950) predicted that orbiceps would ultimately be shown to be a synonym of melliger. The conceptual melliger, as established by Wheeler and Creighton was not the same as Forel's ant; it was, in fact, misidentified samples of orbiceps in which there were no workers with orbiculate heads, but did include some material of mendax. Creighton and Crandall (1954), reporting a monumental nest excavation by Crandall, were able to show that the form with orbiculate heads did, indeed, produce repletes. They therefore placed orbiceps in synonymy with melliger.

Snelling (1970) reviewed the melliger group species. The concept of Myrmecocystus melliger, based on an examination of Forel's types, was clarified and Wheeler's comatus placed in the synonymy of that form and the status of Myrmecocystus mendax, as a valid species, was somewhat clarified. There is, however, no excuse for his treatment of orbiceps, for that name was placed in the synonymy of Forel's Myrmecocystus placodops. Type material of both was at hand for direct comparison, but no such comparison was made, simply because the concept as to the identity of orbiceps was exceptionally clear and it was obvious that placodops fits that concept perfectly.

It was with considerable chagrin, therefore, that I discovered that the types of orbiceps are not "orbiceps" at all. They no more match Wheeler's description and figures of orbiceps than does the long-haired variant of mendax. In fact, they are the long-haired variant of mendax. Wheeler apparently wrote up his description and then selected his best set of specimens as types and never realized that they were not conspecific. The subsequent identity of orbiceps has been based on the concept created by the description and figures, a concept which could not include the types. Because of the confused identity of orbiceps and because of the inappropriate nature of that name to the present species, I feel that continued use of mendax is fully justified.

This species is very closely related to both Myrmecocystus melliger and Myrmecocystus placodops. Erect body hairs are subject to much variation through the entire range of the species and have been a source for confusion in the past and for frustration to the present writer.

Samples from Colorado, northern New Mexico and Arizona, Nevada and California differ greatly from those of Texas and southern New Mexico and Arizona. In large workers of the northern, short-haired form, the longest hairs of the pronotum are 0.58-0.60 x the MOD and the longest discal hairs of the second tergum are about 0.65-0.68 x the MOD. From the Edwards Plateau of central Texas to the mountains of southern Arizona a distinctive, long-haired form predominates, but does not wholly replace "normal" mendax. In the large workers of this form, hairs are shortest in samples from the Edwards Plateau. The longest pronotal hairs are 0.70-0.75 x the MOD and the long discal hairs of the second tergum 0.75-0.80 x the MOD. Westward from the Edwards Plateau, hair length increases to an extreme condition present in samples from the mountains of southern Arizona. Here the pronotal hairs may be up to 1.30 x the MOD and the discal hairs of the second tergum up to 1.15 x the MOD.

Much the same situation applies in a north to south cline, for, distinctive as these extreme short-haired and long-haired forms are, they are perfectly intergradient to one another. There is no question, in my mind, of two species being represented, nor that the southern form can be set up as a subspecies: the cline is too fully developed. Furthermore, in the mountains of southern New Mexico and Arizona there are nests in which all, or most, of the larger workers are much more like the northern form. A single sample is available from Chihuahua (Nogales Ranch, Sierra de en Medic). In the large workers the long pronotal and discal hairs of the second tergum are 0.65 x the MOD. The single specimen from Cananea, Sonora, is a medium-sized worker but appears to be of the short-haired form, as seems true of the small workers from Puerto Gonzalitos.

The closely related species Myrmecocystus placodops, which ranges from western and southern Texas to southern Arizona, is a short-haired ant. It is broadly sympatric with mendax. Workers differ most conspicuously from those of Myrmecocystus mendax in the shorter hairs; in large workers, the long pronotal hairs are about 0.46-0.48 x the MOD, as are those of the second tergum. There appears to be little variation in this regard in placodops, western populations being very similar to those of Texas in hair length.

The great range of variation noted for mendax was very troublesome, especially since it closely approached the accentuated hair length of melliger. It became evident, finally, that those populations of mendax with long hair were those adjacent to, or sympatric with, the closely related placodops. I can only hypothesize that mendax is exhibiting character displacement against placodops.

As I interpret the situation, mendax and placodops may both be derived from a form very much like the present Myrmecocystus melliger. I also assume that placodops diverged at an earlier period and is now genetically more stable than Myrmecocystus mendax. The short-haired condition of mendax appears to be inhibited in those areas where it is adjacent to, if not actually sympatric with, placodops. Interestingly, the few specimens from northern Mexico, in areas where the range of mendax becomes sympatric with melliger, show an apparent reversal of the longhaired trend in mendax. In these, displacement against melliger produces short-haired mendax. Clearly, more field work must be done, particularly in northern Mexico. An effort should be made to delimit areas of melliger-mendax sympatry and to study the populations of these areas.

There has been some confusion in the past of the long-haired variant with comatus, a synonym of meltiger. The New Mexico records cited by Cole (1954) and those from Colorado in Gregg (1963) as comatus are based on long-haired populations of mendax. Even more remarkable, perhaps, is the record of mendax from Hidden Springs Canyon, San Bernardino Co., Calif., recorded as Formica subpolita camponoticeps Wheeler by Cook (1953). This is merely another example of that author's complete lack of taxonomic ability. 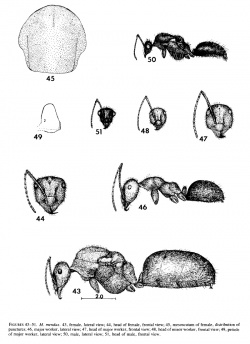 Petiole: In profile, thick, not at all cuneate, summit broadly rounded, but may be flattened, rarely subangulate; crest, in frontal view, usually flat, but may be slightly concave.

Vestiture: (Based on workers with PW in excess of 0.9 mm). Cephalic pubescence general, but sparse, never obscuring integument, most abundant on occiput, vertex and frontal lobes. Sparse on pronotum, more abundant on remainder of thorax, only partially obscuring surface, densest on propodeum. First three terga with conspicuous pubescence, usually notably sparse in small workers; fourth tergum usually not pubescent, except in some large workers of southern populations.

Malar area with 6-10 erect hairs, longest about 0.6 x MOD. Longest occipital hairs about 0.75 x MOD. A few short erect hairs on face between eye and frontal lobe. Longest scutal hairs 0.70-0.80 X MOD; scutellar hairs longer than those of scutum, some 1.0 x EL. Pleural hairs sparse, long, longest 0.9-1.1 x MOD. Long hairs across base of propodeum about equal to MOD. Sides and crest of petiole with numerous short hairs, about 0.5 x MOD. Disc of first tergum, behind summit with erect hairs sparse, those at summit about 0.75 x MOD; disc of second tergum similarly sparsely hairy or wholly apilose, but with usual row along apical margin and with sparse hairs along length at sides, where they are about 0.8 x MOD; apical segments with long hairs abundant, longest exceeding EL. Scape, femora and tibiae with abundant suberect to erect short hairs, longest hairs of hind tibia about equal to apical thickness of tibia. Fore and hind wings without fringe hairs on apical and posterior margins.