Beyond habitat details of the type collection, nothing is known about the biology of Myrmecocystus christineae.

A member of the subgenus Myrmecocystus .

Known from the Ivanpah and Granite Mountains in California. The species probably occurs in suitable habitats of adjacent ranges in California and Nevada. 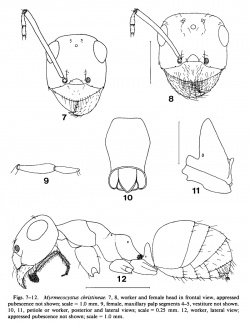 Petiole: Elongate-cuneate in profile, summit narrowly rounded; crest, from behind, weakly notched; from above about twice wider than long.

Pubescence fine, sparse and short on head and mesosomal dorsum; longer and a little denser on mesosomal side and on gastric terga; everywhere appressed, but with some suberect pubescence on basal area of first tergum.

Head: As broad as, or a little broader than long, CI 100-104; longer than, or as long as, scape, SI 92-100. In frontal view, broadest below eyes, sides weakly convex. Occiput, in frontal view, flat, corners broadly rounded. Eye large, EL 1.3-1.5 X first flagellomere; OMD 1.0-1.6 X EL; IOD 2.2-2.9 X OD; OOD 1.8- 2.5 X OD. Mandible variable, usually with five conspicuous, widely spaced teeth (in addition to apical tooth) and with two to four smaller denticles between these. Fifth segment of maxillary palp broad over much of its length, narrowed at base and apex.

Petiole: Compressed in profile, crest narrowly rounded; distinctly notched in frontal view; from above, about three times wider than long.

Vestiture: Erect hairs short and sparse on clypeus, absent from frontal lobes; a single pair, short and suberect, in ocellar area; absent from meso scutum; four to six short, suberect hairs on scutellum; first three terga without erect hairs, but with sparse, decumbent hairs; remaining terga and the sterna with moderately long, suberect to erect sparse hairs. Hairs of tibiae short, fine and decumbent to appressed. Scape with appressed pubescence only. Wings as in female. 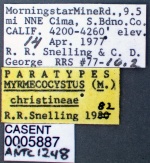 This species is dedicated to Christine D. George who materially assisted in collecting and studying this new species and who is currently investigating Myrmecocystus ecology in the Mojave Desert.