This species does not appear to be very closely related to any of the other species of Eremnocystus. In the abundant appressed pubescence it is most like Myrmecocystus hammettensis, but workers of that species possess numerous fully erect hairs on the scapes and cheeks. The female Myrmecocystus colei has the mesoscutum densely and uniformly covered with fine punctures while that of hammettensis has the scutum sparsely and coarsely punctate. In colei females the penultimate segment of the maxillary palp is broad basally and tapers to a narrow apex; it is nearly parallel-sided in hammettensis. (Snelling 1976)

Known from coastal and intermediate valleys of southern California.

This ant is known to occur in the coastal sagebrush phytocenose, along stream drainages, up to areas where this habitat grades into the Oak-Juniper-Joshua tree association. Nests are constructed in compacted clayey soil, usually overlain with gravel or coarse sand. Foraging activities appear to be fully diurnal, with workers active out of the nest at midday. The workers are assiduous scavenger-predators and also collect large quantities of nectar from flowers. (Snelling 1976)

Previous records for this ant have been from coastal valley stations. New Mojave Desert samples were a little less pilose than those from coastal stations. Our samples were from the bed of a sandy wash dominated by Salsola iberica in rolling grassland which had been Joshua Tree Woodland until cleared. (Snelling (1982) 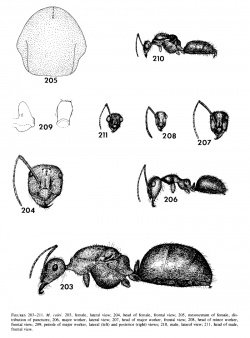 Thorax: Moderately robust, PW 0.39-0.48 (0.47) x WL. Mesonotum, in profile, evenly convex from front to back except in largest workers where it is abruptly declivitous behind. Basal face of propodeum distinct, sharply rounded into the longer posterior face.

Petiole: Scale erect, in profile about twice higher than thick; posterior face straight, anterior rather abruptly narrowed in upper third; crest narrow in frontal view, flat in smallest workers, slightly concave in largest; from above, about twice wider than long.

Vestiture: Pubescence sparse on malar area and clypeus; sparse to abundant on frontal lobes and abundant on occiput, but not obscuring surface; abundant and long on thoracic dorsum and pleura, but sparser and finer on propleura, loosely appressed to subappressed; abundant, but not concealing integument, on first three terga (sparser on third tergum of some minors), sparse on remaining segments.

Scape, inner face of fore femur, outer faces of middle and hind tibiae with fine suberect to erect hairs; malar area, in frontal view, with a few reclinate to suberect hairs; clypeal disc, front of head and occiput with numerous erect hairs, those of occiput about half as long as minimum eye diameter. Pronotum and mesonotum with conspicuous fully erect hairs, usually fewer than 15 on each segment, shorter than those of occiput; posterior half of propodeal dorsum with at least 10 fully erect short hairs. All terga with numerous erect, short hairs, progressively longer caudad.

Petiole: In profile, compressed above, crest sharp; in frontal view, sides convergent toward crest, crest broadly and deeply angularly excised; from above about three times wider than thick. 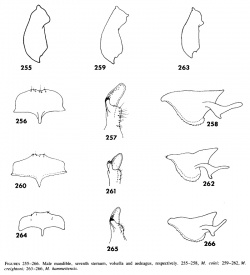 Petiole: In profile, cuneate; crest, seen from front, nearly flat or with obscure median emargination; in dorsal view, about twice wider than long.