A diurnal forager that is a scavenger and effective predator.

Snelling (1976) - Wheeler and Wheeler (1973) reported on this species (as placodops) in Deep Canyon. Within the Desert Biome in Deep Canyon, they found colonies distributed as follows: Larrea-Palo Verde Community, 800' (3); Cholla-Palo Verde Community, 900-1200' (14); Agave-Ocotillo Community, 2500' (1). One colony was located at 3600' in the ecotone between the Desert and Chaparral Biomes. A crateriform tumulus was observed to be about 25 em external diam., inner rim about 15 em diameter, the entrance 20-25 mm diam.

Nests studied near Pearblossom were all situated in deep, but well-packed sand at the edge of a wash, as was the one located south of Big Pine. The one found in Last Chance Canyon was sited at the edge of a road, about 20 feet above the bed of Last Chance Creek. The nests were surmounted by low, broad crateriform tumuli composed of sand particles and fine soil.

As with other species of Endiodioctes, Myrmecocystus semirufus is a diurnal forager and is a scavenger. It is also an effective predator; at Pearblossom, returning foragers were bringing in many recently dead insects, mostly leafhoppers (Cicadellidae) and grass bugs (Miridae), but including a few termites, beetles, flies and small wasps and bees. The quantity of recently dead insects strongly suggests active predation.

During the rainy spring and autumn seasons foragers are also active on flowers. At Pearblossom I have seen them on Malacothrix (Asteraceae), Phacelia (Hydrophyllaceae), Salvia (Lamiaceae), Oenothera and Camissonia (Onagraceae), Mentzelia (Loasaceae) and Cryptantha (Boraginaceae) during March-May; in September and October the workers are found at the flowers of Eriogonum (Polygonaceae) and Haplopappus (Asteraceae). The specimens collected near Tehachapi were noted to be on Isomeris arborea Nutt. (Capparaceae).

Snelling (1976) - This name has been the subject of considerable confusion, briefly reviewed by Snelling (1969). The original description was based on specimens from San Jacinto, Calif. and Denver and Pueblo, Colo. Wheeler (1908) correctly recognized that two species were represented in Emery's material and restricted the true semirufus to the California sample; the Colorado specimens were assigned to his mendax. Thus, the type locality was restricted to San Jacinto, Calif. And has priority over the designation of Denver, Colo. By Creighton (1950), repeated by Gregg (1963). Cook (1953) cited both as the type locality.

Unfortunately, Wheeler (1908) then incorrectly applied the name to a very different, wide ranging ant which only superficially resembles semirufus. The correct name for semirufus of Wheeler and subsequent authors is Myrmecocystus kennedyi, except for those misidentifications which apply to still other species. The true semirufus is an uncommon species known only from southern California and adjacent Baja California.

Although the females are very different, the workers of this species most closely resemble those of Myrmecocystus placodops and are separable only with difficulty. The records from Deep Canyon by Wheeler and Wheeler (1973) as placodops are based on specimens which I misidentified as that species. In my paper (Snelling 1969) on the melliger group I attempted to separate the two by the broader head and more obscurely punctate frontal lobes of placodops. The result is far from satisfactory, for some workers of Myrmecocystus semirufus do have the head wider than long, though the percentage of such individuals is much lower in semirufus than in placodops. That character, at least, is not to be relied upon.

The sculpturation of the frontal lobes is another matter, and I am forced to rely upon it, even though it is not wholly satisfactory.

In most workers of semirufus the frontal lobes are shiny and the surface is beset with numerous sharply defined, round punctures, the largest of which are about one-third greater than the smallest. The interspaces vary from as little as one-fourth a puncture diameter to slightly more than a puncture diameter. Similar, but more widely spaced, punctures are usually present on the face between the frontal lobe and the eye; these punctures are less sharp than those of the frontal lobes and the interspaces are distinctly tessellate and less shiny. From these facial punctures emerge short (about 0.06 mm long) stiff, erect hairs. The malar area has scattered coarse punctures which are clearly several times greater in diameter than the hairs arising from them. This is, in fact, generally true: the cephalic hairs arise from punctures conspicuously greater in diameter than •the hairs. Between the ocelli of semirufus the surface is closely micropunctate; these punctures extend up onto the occiput, continuing back nearly to the foramen. On the occipital summit they occupy the middle one-third or more of the dorsum.

The area between the ocelli is often not micropunctate in placodops. When micropunctures are present, as in semirufus, they usually are limited to the ocellar area. Seldom do they extend back to the summit of the occiput and seldom, or never, approach the foramen. When they are present they usually are found only immediately behind the ocelli, not extending laterad as in semirufus.

The most common variations of semirufus include more tessellate frontal lobes, a sporadic nest variant, weakening of facial punctures (Morongo Valley and some Deep Canyon samples) and weakening of occipital micropunctures (Morongo Valley and sporadic nidovariants elsewhere). In general these cephalic characters, even though they must be studied with care, seem to be the only effective means of separating workers. In color the two are similar, but semirufus often lacks dark areas on the thorax. Some samples, especially those from Deep Canyon and Independence, are fully as dark as placodops.

The distribution of semirufus appears to lie wholly to the west of that of placodops. They may become sympatric in the mountain ranges of the central Mojave Desert. 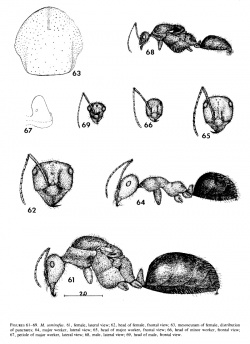 Petiole: Thick in profile, not at all cuneate, summit broadly and evenly rounded; crest, from front, flat or slightly concave, without median notch; from above about 1.5 wider than long.

Vestiture: Cephalic pubescence sparse, densest on vertex and occiput and near mandibular base. Pubescence sparse on scutum and scutellum, conspicuous but not dense elsewhere on thorax, long on propodeum and pleura, Mediobasal portions of dorsum of first tergum and mediobasal area of second tergum sparsely pubescent, otherwise first four terga moderately pubescent, pubescence not obscuring surface, thinner along broad middle area of each segment.

Erect hairs general on face, about 16 erect and suberect hairs present on malar area; longest occipital hairs less than 0.65 x MOD. Erect hairs numerous on scutum, longest about 0.50 x MOD; some scutellar hairs much longer, nearly equal MOD; long pleural hairs sparse, longest about 0.65 x MOD; propodeum with numerous shorter hairs on sides and across basal face. Petiole with numerous short, erect hairs on sides and across crest. Erect discal hairs less numerous on segments beyond first tergum than on that segment, these hairs arising from coarse punctures and longest about twice minimum thickness of hind tibia. Scapes, femora and tibiae with abundant suberect to erect hairs; inner face of fore femur with hairs shorter, finer and sparser than elsewhere on that segment. Fore and hind wings with fringe hairs on apical and posterior margins.

Petiole: In profile, thick, cuneate, summit broadly rounded; crest, in frontal view, slightly concave in middle; from above, about twice wider than long.

Snelling (1976) - Originally described from workers from Calif. (San Jacinto) and Colo. (Denver and Pueblo); Wheeler (1908) restricted the type locality to San Jacinto, Calif. At least one specimen from San Jacinto is in the Museo Civico, Genoa, Italy, but not available for study. Another worker, marked as cotype, is in the American Museum of Natural History and here selected as Lectotype. Other San Jacinto specimens from the same series, but not originally seen by Emery, are in the National Museum of Natural History.