A primarily nocturnal foraging species that has nests that are topped by a low mounds.

This species has been adequately described by Smith (1951) and by Cole (1957). The strongly, angularly projecting propodeum is characteristic of this species and the closely related Myrmecocystus ewarti of California. The lack of erect hairs on the pronotum, disc of the first tergum and the extensor surface of the hind tibia will separate workers of pyramicus from those of ewarti. (Snelling 1976)

Snelling (1976) - A Great Basin species. Although foraging is mostly nocturnal, I have found Myrmecocystus pyramicus workers active outside the nest at midday in Oregon and Idaho. In both instances, though, rain was imminent and the sky was completely overcast. As expected, workers gather nectar from flowers and extrafloral nectaries, as well as from aphids and pseudococcids. They are also general scavengers. Repletes have been recovered from nests in Idaho.

The type series was collected by Ira La Rivers, with the notation "swarming nr. sundown." These specimens were collected on 7 April 1951. The reproductive have been taken in the nests in April, June and September. Mating flights evidently occur during spring and late summer rainy periods.

The type series was collected from a "... small, open mound nest in a sand clearing of Artemisia tridentate ..." Nests which I have observed were all marked by a low crateriform tumulus of fine to coarse sand grains. Since all these were seen during the summer rainy season, the tumuli were likely worn down. Most of the nests have been located in deep, sandy soil. An exception was that discovered in Owyhee County, Idaho. This nest was in deep alkali pan. This soil was very dense and excavation was not complete, but the nest probably continued down into an underlying layer of sand, as the tumulus consisted wholly of coarse sand particles. 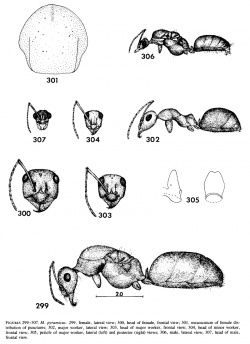 Petiole: Compressed when viewed in profile; from behind, crest narrow, angularly excised in middle; from above, about twice wider than long.

Petiole: In profile, compressed, crest sharp; distinctly angularly notched; from above, about twice wider than long.

Pubescence long, yellowish, appressed to decumbent on head, thorax and appendages; fully appressed and abundant on first three terga, both shorter and sparser on fourth.

Petiole: In profile, distinctly higher than long, sharply cuneate; in frontal view, sides somewhat convergent toward broadly emarginate crest; from above, about twice wider than long.

Pubescence sparse and inconspicuous on head and thorax, denser on propodeum above and first two terga.