A nocturnal foraging species that is known to gather nectar from plants and solicit aphids. Workers also gather remnants of dead arthropods.

Foraging activity is nocturnal; workers gather nectar from plants and solicit aphids. They have also been observed to bring in remnants of dead arthropods. Repletes were found in the type series nest. The activities of the sexual forms are unknown. Presumably the mating flight takes place at night, most likely following a rain. The sexual forms have been found in the nests during the early spring months.

Present data indicate that this species replaces the similar Myrmecocystus pyramicus in southern California on the Mojave and Colorado Deserts.

Snelling (1976) - The workers of Myrmecocystus ewarti may be separated from those of Myrmecocystus pyramicus by the presence of a number of erect hairs on the pronotum and first tergum. A pair of pronotal hairs, which seems always to be present in ewarti, is as long as or longer than the apical breadth of the scape. Although occasional specimens of pyramicus may have one or two erect pronotal hairs, they are always much shorter. Erect hairs are present on the hind tibia of pyramicus but absent in ewarti. The median area of the clypeus of ewarti has four or more long, erect hairs; in pyramicus clypeal hairs are confined to the margins.

The single female available of ewarti is very similar to those of pyramicus but has a number of erect hairs on the clypeal disc, the antennal scape possesses numerous fine suberect hairs, long erect hairs are abundant on the outer face of the fore femur and there are erect hairs on the hind tibia. The malar area of ewarti is less sharply shagreened, the punctures below the eyes are larger and are round (clearly elongate in pyramicus). The best character to separate the females of these species seems to be that of mesoscutal punctation. The discal area in ewarti is rather uniformly finely, sparsely piligerously punctate. There are, in addition, a number of much coarser, setigerous punctures scattered over the disc. The piligerous punctures of the parapsis are little coarser than those of the median area, and are mostly separated by two or more times a puncture diameter. In pyramicus, the center of the mesoscutum is virtually impunctate, the setigerous punctures are fewer and less conspicuous, and the punctures of the parapsis are much coarser than those of the median area, and are mostly separated by a puncture diameter or less.

The males are very similar and, until more specimens of pyramicus are available, the differences noted here must be considered provisional. In size, pyramicus males are conspicuously longer; head length of males of this species exceeds 0.90 mm, while that of ewarti is less than 0.80 mm. However, Myrmecocystus males vary greatly in size within a single colony, so the size difference must be considered with this variability in mind. The lower margin of the fore femur of ewarti has a number of long, erect hairs as well as many extremely fine, short ones. The few males seen of pyramicus possess, in addition, about as many long hairs and an equal, or greater, number of hairs about half as long as the longer. The most conspicuous difference is the presence of a discoidal cell in ewarti males and its lack of those of pyramicus. Finally, ewarti males have a well developed fringe of hairs on the apical margin of the fore wing and apical and posterior margins of the hind wing. There is no fringe on the forewing of pyramicus and on the hind wing it is extremely sparse, most of the hairs separated by much more than their own lengths. 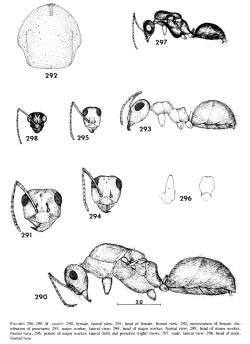 Head: Shape varying from longer than broad in most workers to slightly broader than long in largest workers, CI 88-104 (100); a little shorter than scape, SI 102-136 (110). In frontal view head broadest at lower margin of eyes, sides slightly convex to straight, narrowed toward mandibular insertions. Occiput, in frontal view, somewhat flattened in middle, sides convex, not at all angulate. Eye large, 1.5 x first flagellomere; OMD 0.90-1.15 (0.93) x EL. Mandible with seven distinct teeth, often with a small intercalary denticle between the penultimate and basal teeth.

Vestiture: Erect hairs sparse on head, confined to clypeus, frontal lobes and occipital areas. Erect pronotal pilosity sparse, but with at least a pair of fine, fully erect hairs which are about as long as apical width of scape; mesonotum with 3-6 erect hairs; propodeum without erect hairs at summit of declivity, or with one or two which are less than half as long as those of mesonotum. Petiolar scale with a few very short, inconspicuous erect hairs on crest. Disc of first tergum with scattered, short, fully erect blunt hairs; second and succeeding terga with progressively longer discal hairs. Tibiae with very sparse, fine, decumbent to subdecumbent hairs on outer surfaces, these shorter and finer than the row of gradated bristles on the inner surface.

Pubescence very fine, sparse on head, a little more abundant on occiput, especially behind eyes; thoracic pubescence denser than cephalic, but not obscuring surface, denser on sides of propodeum than elsewhere. First three terga with dense, fine pubescence which does not obscure surface, fourth and fifth with very sparse pubescence.

Thorax: Robust, PW 0.52 x WL. In profile posterior two-thirds of mesoscutum and anterior half of scutellum on same plane; metanotum not protruding.

Petiole: In profile, compressed, crest sharp; in anterior view, distinctly notched; from above, about three times wider than long (not clearly visible in only available specimen).

Pubescence sparse and inconspicuous on head and thorax, conspicuously denser on propodeum above and on first two terga. Forewing with conspicuous fringe hairs from stigma to apex, around apical margin to vein Cu-A; apical and posterior margins of hind wing fringed. 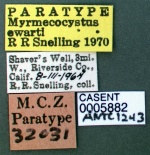 This species is named for Dr. William Ewart of the University of California, Riverside, evidently the first person to collect this species. Dr. Ewart's series was sent to me by Professor Creighton who had recognized the species as new and suggested the name.