This species is common in its preferred habitats within its range. They can often be located by finding a messy soil crater around their nest entrance, along with a distinctive yellowish-gray colored external refuse midden located nearby.

Trachymyrmex arizonensis is often sympatric in central and southern Arizona with the slightly smaller Trachymyrmex carinatus and rarely sympatric with the larger Trachymyrmex nogalensis. It is easily distinguished from all other North American Trachymyrmex by the unusual shape of the frontal lobes in both workers and queens. (Rabeling et al. 2007)

From Rabeling et al. (2007): Trachymyrmex arizonensis is typically found at mid elevations (1000–2000 m) in mountainous areas within the Chihuahuan and Sonoran Deserts in central and southern Arizona, western New Mexico, and the Mexican states of Chihuahua and Sonora. The species has also been reported from western Texas. Weber identified a single specimen of T. arizonensis from the Chisos Mountains (Van Pelt 1983). It is also reported from west Texas by O’Keefe et al. (2000), but as we have not been able to verify these records, the presence of T. arizonensis in western Texas remains uncertain.

Nests are found under rocks or logs or in open soil, frequently in areas that are partly or lightly shaded. A sloppy crater of excavated soil and a diagnostic yellowish-gray external refuse midden is often present near the nest entrance. Trachymyrmex arizonensis and Trachymyrmex smithi are the only US species of Trachymyrmex that routinely have conspicuous external refuse middens near their nest entrances. Other species occasionally accumulate a small refuse pile close to the nest, but these are usually ephemeral. 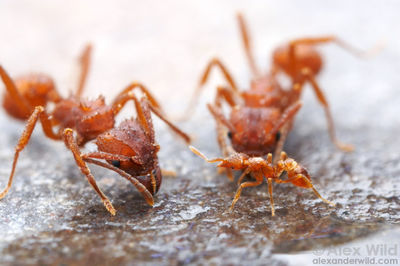 From Rabeling et al. (2007): Trachymyrmex arizonensis is associated with Strumigenys arizonica, a tiny dacetine ant that has been found only within or adjacent to T. arizonensis nests (Ward 1988; see also Yéo et al. 2006). Most species in the genus Strumigenys are specialist predators on Collembola and strongly prefer relatively mesic habitats. We suspect that S. arizonica benefits from the controlled, moist microenvironment the Trachymyrmex provide for their fungal symbiont and feeds on the numerous collembolans that live in the chambers and refuse piles of the Trachymyrmex colony (Johnson & Cover, unpublished data).

In the mountains of southern Arizona, two army ant species, Neivamyrmex nigrescens and Neivamyrmex rugulosus, prey on T. arizonensis (Miranda et al. 1980, LaPolla et al. 2002). In Tamaulipas, Mexico, Neivamyrmex texanus was observed raiding a colony of Trachymyrmex saussurei (Rabeling & Sanchez-Peña, unpublished data). Based on these few observations, army ants seem to be important predators of at least some Trachymyrmex species, and their raids may result in a significant brood loss and partial destruction of the fungus garden (LaPolla et al. 2002).

Since Wheeler (1907, 1911) collected both the type series and subsequently the workers of Trachymyrmex arizonensis in southeast Arizona, the collection locality clearly motivated the species name. (Rabeling et al. 2007)