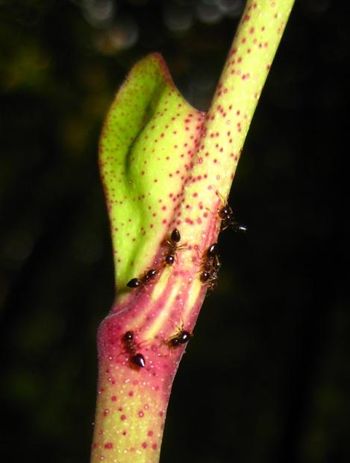 Extrafloral nectaries have been reported from over 90 families of flowering plants and ferns (Koptur 1992), mostly from tropical and subtropical regions. Plants producing extrafloral nectar are known to suffer less from herbivory (Rezende et al. 2014). There is considerable variation in extrafloral nectary morphology and visitor spectra of ants and other insects (Oliveira and Brandao 1991; Brewitt et al. 2015).

Sanz-Veiga et al. (2017) - Extrafloral nectaries can occur in both vegetative and reproductive plant structures. In many Rubiaceae species in the Brazilian Cerrado, after corolla abscission, the floral nectary continues to secret nectar throughout fruit development originating post-floral pericarpial nectaries which commonly attract many ant species. The occurrence of such nectar secreting structures might be strategic for fruit protection against seed predators, as plants are expected to invest higher on more valuable and vulnerable parts. Here, we performed ant exclusion experiments to investigate whether the interaction with ants mediated by the pericarpial nectaries of Tocoyena formosa affects plant reproductive success by reducing the number of pre-dispersal seed predators. We also assessed whether ant protection was dependent on ant species composition and resource availability. Although most of the plants were visited by large and aggressive ant species, such as Ectatomma tuberculatum and species of the genus Camponotus, ants did not protect fruits against seed predators. Furthermore, the result of the interaction was neither related to ant species composition nor to the availability of resources. We suggest that these results may be related to the nature and behavior of the most important seed predators, like Hemicolpus abdominalis weevil which the exoskeleton toughness prevent it from being predated by most ant species. On the other hand, not explored factors, such as reward quality, local ant abundance, ant colony characteristics and/or the presence of alternative energetic sources could also account for varia- tions in ant frequency, composition, and finally ant protective effects, highlighting the conditionality of facultative plant-ant mutualisms.

Schwitzke et al. (2015) - Leea manillensis (Leeaceae) is a large erect shrub with height up to 6 m, terminal inflorescences, and large stipular structures that enclose the next generation of shoots. It is distributed widespread throughout the Philippines and parts of Southeast Asia (Molina et al. 2013). The species is shade-tolerant, growing in the understory, as well as in forest gaps (and edges) in primary and secondary forests, with especially high abundances in bright, young-aged secondary growth forests.

Our results show that Leea manillensis consists of a highly variable system, shaped by a number of factors. We could confirm that it has mutualistic interactions with ants attracted by extrafloral nectaries and food bodies. Ants provided a certain degree of protection. However, the indirect defence mechanism via ants turned out to be very fragile, dependent on different conditions that influenced the magnitude of the beneficial effect of ants on plants (see also Rico-Gray et al. 2012). We found no evidence of any specific relationship between Leea and the attracted ants. Meng et al. 2011 describe similar conditions in the species Leea glabra (Leeaceae) growing in South China. The broad range of ant species observed to visit the extrafloral nectaries is consistent with a pattern typically found in many facultative ant–plant associations and indicating a low specificity (Fiala et al. 1994; Kessler and Heil 2011). Not only did we find a broad range of ant species, but also a high intraspecific variability in the abundance of ants assembling at the extrafloral nectaries. Only 36 % of the observed shoots showed a permanent presence of ants perhaps due to varying EFN production of the plants.

Passos and Leal (2019) conducted a field experiment examing ant attendance at extrafloral nectories of the plant Turnera subulata in northeastern Brazil (12°16′24″S 38°57′20″W﻿ / ﻿12.27333°S 38.95556°W﻿ / -12.27333; -38.95556) Caatinga vegetation. The experiment was designed to test the hypothesis that more aggressive ants would be better defenders of EFN bearing plants by preying on more herbivores. Ants attending the EFNs were determined to morphospecies and subsequently classified as dominant or subordinate species. Herbivory was measured by placing larvae of the beetle Ulomoides dermestoides Fairmaire on leaves of the plants and noting their discovery and removal by the ants. Thirteen ant morphospecies were observed attending the EFNs, with most plants having two or more ant species present. The results did not support the hypothesis tested. The data did show that the probability of herbivore removal by ants increased with decreasing arthropod biomass, as measured in the soil around the plants studied.

More aggressive and competitive ant species are better bodyguards for extrafloral nectary (EFN)-bearing plants. Therefore, any factor that increases the relative value of EFNs to ants should benefit the plants, because it would increase the probability of the plant interacting with more aggressive ants. We hypothesized that the frequency of plant attendance by more aggressive ants and the efficiency of plant defence by ants will be higher when the availability of carbohydrates and/or proteins to ants is low. We established 19 plots with five focal plants from the EFN-bearing species Turnera subulata per plot. For each focal plant, we recorded the identity of the attending ants and their efficiency in removing simulated herbivores from the plant. In each site, we estimated the biomass of soil arthropods and the number of apical meristems with active EFNs as proxies of protein and carbohydrate availability, respectively. The probability of interacting with more aggressive ant species was not influenced by the number of meristems with active EFNs or by arthropod biomass. However, simulated herbivores were removed more frequently in plots with lower arthropod biomass. This suggests that overall ant aggressiveness towards other arthropods increases in protein-poor sites, potentially increasing the efficiency with which EFN-bearing plants are defended against herbivores.

While some studies have shown that ants that visit extrafloral nectaries may defend their host plants against potential herbivores, recent researches have shown that such ant-plant mutualism may be broken in some cases. For example, the presence of ants on plants could also drive away pollinators and seed dispersers. However, it is not yet known what mechanisms could favor that ant presence on plants does not affect other mutualistic interactions involving plants. In this work, we performed a series of field experiments to test the hypothesis that the presence of ants on EFNs located at the base of the inflorescences of Vigna luteola (Fabaceae) may have a negative effect on non-pollinators but not on pollinators in a Mexican coastal sand dune. In general, we found that the presence of ants on the plants decreased the rate of flower visitation. However, we observed that the time of visitation of the pollinator, the bee Megachile (Pseudocentron) sp. on the flowers was less compared to non-pollinators. This strategy may allow that ants cannot aggressively scare away the pollinator. In summary, we show that the pollinator of V. luteola present strategies that allow them to visit the flowers without being aggressively attacked by the ants that visit the extrafloral nectaries (EFNs). Therefore, the presence of ants on plants could have a dual function: protecting plants against potential herbivores as well as, filtering flowers against nectar thieves.

In this study, we conducted a series of experiments in a population of Vachellia constricta (Fabaceae) in the arid Tehuacan-Cuicatláan valley, Mexico, in order to evaluate if the food source quality and ant dominance hierarchy influence the outcomes of ant-plant interactions. Using an experiment with artificial nectaries, we observed that ants foraging on food sources with higher concentration of sugar are quicker in finding and attacking potential herbivorous insects. More specifically, we found that the same ant species may increase their defence effectiveness according to the quality of food available. These findings indicate that ant effectiveness in plant protection is context-dependent and may vary according to specific individual characteristics of plants. In addition, we showed that competitively superior ant species tend to dominate plants in periods with high nectar activity, emphasizing the role of the dominance hierarchy structuring ant-plant interactions. However, when high sugar food sources were experimentally available ad libitum, the nocturnal and competitively superior ant species, Camponotus atriceps, did not dominate the artificial nectaries during the day possibly due to limitation of its thermal tolerance. Therefore, temporal niche partitioning may be allowing the coexistence of two dominant ant species (Camponotus rubrithorax during the day and C. atriceps at night) on V. constricta. Our findings indicate that the quality of the food source, and temporal shifts in ant dominance are key factors which structure the biotic plant defences in an arid environment.

The relationship between plants and ants is often mediated by the presence of extrafloral nectaries (EFNs) that attract ants and provide rewards by protecting plants from herbivores or parasites. Ficus trees (Moraceae) and their pollinators (Hymenoptera: Agaonidae) are parasitized by many nonpollinating fig wasp species (Hymenoptera: Chalcidoidea) that decrease the reproductive output of the mutualistic partners. Previous studies have shown that ants living on and patrolling Ficus species can efficiently deter parasitic wasps. The aim of this study was to verify the presence of EFNs on figs of Ficus benguetensis and test the hypothetical protection service provided by ants. Figs in different developmental stages were collected from Fu-Yang Eco Park, Taipei, Taiwan. Sugars on the fig surface were collected and analyzed through high-performance anion-exchange chromatography. Moreover, ants were excluded from the figs to determine the effect of ants on the nonpollinating fig wasps. We identified three oligosaccharides whose relative proportions varied with the fig developmental phase. In addition, results showed that the ant-excluded figs were heavily parasitized and produced three times less pollinators than did the control figs. Finally, the specific interactions of Ficus benguetensis with ants and the relationship between figs and ants in general are discussed.