A fungus growing species that uses grasses for its gardens. Workers transport cut grass along trunk trails and can forage up to 150 m from the nest. Foraging behavior differs by distance from the nest. Larger workers cut grass fragments when far from the nests and smaller workers pick up and transport cut fragments Longer transport distances lead to transport chains with up to 5 different workers moving a single grass clipping (Röschard and Roces 2003). This species was found to be a pest in pastures in Paraguay, feeding on the grasses Cenchrus ciliaris, Chloris gayana, Cynodon nlemfuensis, Digitaria eriantha, Megathyrsus maximus and Urochloa mosambicensis (Sarubbi & Ramirez, 2020).

Viera et al. (2015) - Queens of leaf-cutting ants found their nests singly, each consisting of a vertical tunnel and a final horizontal chamber. Because of the claustral mode of nest founding, the queen and/or her initial fungus garden are exposed to threats imposed by several soil pathogens, and the antibiotic secretions produced by their metapleural glands are considered a main adaptation to deal with them. Nests of two Atta leafcutting ant species, Atta vollenweideri and Atta sexdens rubropilosa, occur in different soil types, alfisols and oxisols. Their queens are known to excavate the initial nest in different soil horizons, clayish and organic, respectively, which differ in their fertility and associated microbiota. The results revealed that metapleural glands of A. sexdens rubropilosa have a larger number of secretory cells, and consequently a higher production of antibiotic secretions, which may have been selected to allow nest founding at the superficial horizon of oxisols rich in organic matter and microorganisms. Glands of A. vollenweideri, on the contrary, presented fewer secretory cells, suggesting less production of antibiotic secretions. We argue that the excavation of deep founding nests in A. vollenweideri was primarily selected for during evolution to avoid the risk posed by flooding, and further hypothesize that a reduced number of cells in their metapleural glands occurred because of a weak pathogen-driven selective pressure at the preferred soil depth. 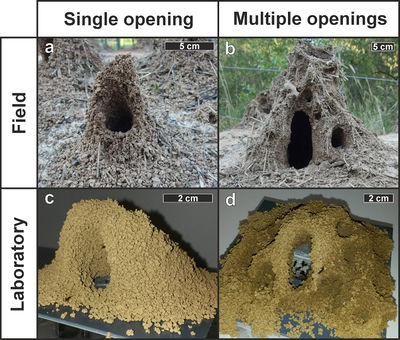 Halboth and Roces (2017) - Abstract Nest ventilation in the leaf-cutting ant Atta vollenweideri is driven via a wind-induced mechanism. On their nests, workers construct small turrets that are expected to facilitate nest ventilation. We hypothesized that the construction and structural features of the turrets would depend on the colony’s current demands for ventilation and thus might be influenced by the prevailing environmental conditions inside the nest. Therefore, we tested whether climate-related parameters, namely airflow, air humidity and CO 2 levels in the outflowing nest air influenced turret construction in Atta vollenweideri. In the laboratory, we simulated a semi-natural nest arrangement with fungus chambers, a central ventilation tunnel providing outflow of air and an aboveground building arena for turret construction. In independent series, different climatic conditions inside the ventilation tunnel were experimentally generated, and after 24 hours, several features of the built turret were quantified, i.e., mass, height, number and surface area (aperture) of turret openings. Turret mass and height were similar in all experiments even when no airflow was provided in the ventilation tunnel. However, elevated CO 2 levels led to the construction of a turret with several minor openings and a larger total aperture. This effect was statistically significant at higher CO 2 levels of 5% and 10% but not at 1% CO 2 . The construction of a turret with several minor openings did not depend on the strong differences in CO 2 levels between the outflowing and the outside air, since workers also built permeated turrets even when the CO 2 levels inside and outside were both similarly high. We propose that the construction of turrets with several openings and larger opening surface area might facilitate the removal of CO 2 from the underground nest structure and could therefore be involved in the control of nest climate in leaf-cutting ants.

(see the publication for citations) For Atta vollenweideri, a species native to the clay-heavy soils of the Gran Chaco region in South America, the elevated carbon dioxide levels in the nest pose a major problem. Clay-heavy soils show low porosity and low air permeability [17], which hinders the removal of CO 2 from underground chambers and the supply of the nest with oxygen via diffusion with the surrounding soil. To facilitate gas exchanges, nests of Atta vollenweideri rely on a wind-induced ventilation mechanism taking advantage of the Bernoulli principle [18], similar to that involved in the ventilation of prairie dogs’ burrows [19]. The nests possess an aboveground nest mound permeated with up to 200 nest openings that are not all used as exits or entrances by the ants [20,21]. Inflow and outflow of air through the nest openings depend on their location on the nest mound. Surface wind is dragging air out of central tunnels, followed by an inflow of air at the periphery [18]. On top of central nest openings, the ants construct conspicuous turrets that are expected to enhance nest ventilation by elevating the tunnel opening and exposing them to greater wind velocities (Fig 1A and 1B).

Most of the building material used for the construction of turrets originates from the excavation of nest structures in the underground. Workers carry soil pellets from underground digging sites to the surface and deposit them around the nest openings, resulting in the formation of crater-like soil heaps, a common feature of ant nests in warmer climates [22]. Additionally, workers rearrange the soil pellets and import building material like twigs and grasses from the immediate vicinity to form such particular structures [23,24]. The variables that lead to turret construction and influence the turret shape, however, are still largely unknown. Jonkman observed an increase in turret height on Atta vollenweideri nests after heavy precipitation, and also the closure of some turret openings during rain or during the winter months [20], indicating that turret construction is influenced by environmental conditions. We hypothesized that the ants’ building behavior and the resulting structure of the turrets would depend on the colony’s current ventilation demands and thus might be influenced by the prevailing climatic conditions inside the nest. In the present study, we investigated turret-building behavior in the leaf-cutting ant Atta vollenweideri and the influence of climate-related parameters, i.e., airflow, air humidity and carbon dioxide levels in the outflowing nest air on the construction and structural features of the ventilation turrets.