From Storz and Tschinkel (2004): Pheidole obscurithorax occurs as a native species in mature flood plain and open pasture along the Parana River (A.V. Suarez, personal communication) and presumably along the Paraguay River, which are traveled by ocean-going vessels. Its occurrence in North America was first observed by E.O. Wilson in the port city of Mobile, Alabama, in the early 1950's (Naves 1985; under the name, P. fallax obscurithorax). Several other ant species with ranges along the Paraguay River system (Brachymyrmex patagonicus, Linepithema humile, Solenopsis invicta, and Solenopsis richteri) have been transported to the southeastern United States via the ports of New Orleans, Mobile, and Pensacola (Naves 1985). Pheidole obscurithorax coexists in disturbed habitats with the fire ant Solenopsis invicta, which was introduced at Mobile in the late 1930s (Buren et al. 1974), but has been much slower to expand its range, the extent of which is unknown. It was first observed in Tallahassee, Florida (400 km east of Mobile), in 1998 (W.R. Tschinkel, personal observation).

In the past decade, P. obscurithorax has been reported from many additional sites in both South and North America, where it has often found to be an ecologically dominant species (LeBrun et al. 2007, Calcaterra et al. 2008, 2010).

Wilson (2003) placed this species close to Pheidole fallax (from the Central America, northern South America, and the West Indies), Pheidole gigas (from Brazil), Pheidole jelskii (from the South America and the West Indies), Pheidole puttemansi (from Argentina and Brazil), Pheidole roushae (from the Central America), Pheidole tobini (from Peru), and Pheidole valens (from Brazil). Moreau (2008) constructed a phylogenetic tree of Pheidole that included 19 of the 103 species that Wilson (2003) placed in the fallax group, and found that the fallax species group was polyphyletic. Moreau (2008) placed P. obscurithorax closest to P. jelskii, the only other species in the analysis that was among the seven species that Wilson (2003) considered to be closely related to P. obscurithorax.

No doubt many P. obscurithorax specimen records remain hidden in the long lists of unidentified Pheidole species recorded in many published faunal studies, particularly from South America. In addition, it is likely that published studies have misidentified P. obscurithorax specimens as other species, notably P. fallax. Alex Wild (pers. comm.) wrote: “there are several species that are all quite similar: obscurithorax, jelskii, bergi, and at least two potentially undescribed species I've been calling cf. jelskii and cf. obscurithorax. Any of these might be going by "fallax" in the literature... In northern Argentina and Paraguay, Pheidole jelskii is the most commonly encountered member of the complex.” Rodrigo Feitosa (pers. comm.) wrote, concerning P. obscurithorax, jelskii, and fallax: “Minor workers are virtually identical and even examining the majors it can be almost impossible to recognize the limits between these three species, especially in southern Brazil... I would not be surprised if these three names were merged in the future.”

In North America, however, it is simple to distinguish major workers of P. obscurithorax from those of any other native or exotic species of Pheidole. Naves (1985) wrote, concerning the major workers, that P. obscurithorax “is a large, very dark species over 6 mm in body length. Its characteristics, such as the heavily sculptured head and thick scape which is curved mesally and more angular laterally are unique among the Pheidole of North America.” Minor workers of P. obscurithorax could be confused with those of Pheidole dentata Mayr, which may be found in the same habitats. However, P. obscurithorax minors are larger than P. dentata minors, have a more ovate-shaped head, and have the nuchal collar visible in full-face view.

True to Naves' (1985) speculation, the range of Pheidole obscurithorax in South America appears to be quite extensive, ranging 27.5 degrees of latitude, from 6.7°S to 34.2°S. If P. obscurithorax is so widespread in South America and often a dominant species, then it is clear that many South American Pheidole specimens previously identified in publications and in museums as other species, are probably P. obscurithorax. To more fully delineate the native range of P. obscurithorax, it would be valuable for researchers to re-examine South American Pheidole specimens, particularly specimens previously identified as Pheidole fallax. Despite Wilson's (2003) conclusion that P. fallax is limited to Caribbean area, with South American records limited to Colombia and Venezuela, numerous studies continue to record P. fallax from Argentina and Brazil (e.g., Ramos et al. 2004, Diehl et al. 2005, Martins et al. 2006, Delabie et al. 2007, Santos et al 2008, Vittar & Cuezzo 2008, Cuezzo and Campero 2009, Jaime 2010, Castro et al. 2012, Miranda et al. 2012, Ulysséa & Brandão 2013). While some of these records may be P. jelskii, others are probably P. obscurithorax.

Pheidole fallax, Pheidole gigas, Pheidole jelskii, Pheidole puttemansi, Pheidole roushae, Pheidole tobini, and Pheidole valens are similar. These related species are all Neotropical in distribution. Thus far, P. obscurithorax is the only member of this group of eight species known to have made its way into the US, although P. fallax and P. jelskii have been reported from the West Indies (Wilson 2003 and MEM specimen data). Of these species, P. fallax and P. jelskii are the most similar in appearance to P. obscurithorax. With the identification keys in Wilson's monograph of the Pheidole in the New World (Wilson 2003), it is relatively easy to separate the major workers of these related species; however, the minor workers of all three are very similar to one another making identifications based on the minor worker caste alone difficult, especially in Central America, northern South America, and the West Indies where their respective ranges all overlap. Of the eight related species, P. jelskii is the only one for which the male and queen have been described (Forel 1893). Identifications of males and queens unassociated with a colony in this group of eight species from outside of the US may be unreliable. The current situation in the US is quite different, as P. obscurithorax is the only exotic member of the fallax group known to occur there. Only two native species, Pheidole dentata and Pheidole morrisii, in the fallax species group occur in the southeastern US, including eastern Texas where P. obscurithorax has been reported. Major workers of both native species are easily distinguished from P. obscurithorax by their lack of strong sculpture. Minor workers of P. dentata may be confused with P. obscurithorax, but can be separated by their smaller size and the nuchal collar not being visible in full-face view. Males and queens of both of these native species in the fallax group have been described (Forel 1901, Mayr 1886) and both lack the strong sculpture of P. obscurithorax. With the description of the queen of P. obscurithorax provided here, reliable identification of queens of P. obscurithorax collected in the US is now possible.

See the extensive discussion by Wetterer et al. (2015) regarding the range of this species in the identification section above.

From Wilson (2003): Kempf (1972b) reports obscurithorax from Córdoba, Formosa, and Santa Fé in northern Argentina. I have also seen series from the Parana River and Canindeyú Province in Paraguay. In 1950 I discovered a colony nesting in Mobile, Alabama, within a kilometer of the ship docking area, an ideal entry point for exotic species, such as obscurithorax, that occur in or near potential embarkation areas along or close to the banks of the Paraguay and La Plata Rivers of southwestern Brazil, Paraguay and Brazil. Shipping has occurred regularly over decades between these areas and the ports of the southern United States.

In Florida Deyrup, Davis & Cover (2000) found this species to be established in Escambia, Santa Rosa, Okaloosa, Walton and Leon Counties. Pest status: none. No previous published records from Florida; earlier specimens: 1992. Naves (1985) reported this species from Alabama, close to the Florida border.

In its introduced range this species is associated with disturbed habitats that contain open areas of sandy soil.

Also see the extensive discussion by Wetterer et al. (2015) in the identification section above.

Wild and Suarez (2009) - Genetic analysis shows the North American populations of this species appear to originate from a single introduction from a native population found along a stretch of the Paraná River in northern Argentina from Resistencia (27.5°S) to Santa Fe (31.6°S).

From Wilson (2003): A Mobile, Alabama, colony occupied a large crater nest in open, sandy soil. Stefan Cover, Lloyd Davis Jr., and Mark Deyrup (Cover, personal communication), found the species in western Florida mostly in disturbed areas, but once in secondary forest in a creek valley. On several instances the nests were located close to those of the imported fire ant, Solenopsis invicta, suggesting superior resistance to this formidable invasive.

This species has not been studied in its native range.

As reported in King and Tschinkel 2007: large colonies of ~10,000 workers (WRT unpublished data).

Storz and Tschinkel 2004: Pheidole obscurithorax is omnivorous and collects a variety of arthropod prey, including other ants, and less frequently plant material such as flower petals. Its midden piles are often littered with heterospecific ant body parts, especially those of Solenopsis invicta, an abundant ant often found nesting near P. obscurithorax nests. Pheidole obscurithorax uses a combination of foraging tactics; if a prey item is small enough, scouts carry it unaided back to the nest. If the prey item is too large, teams of workers carry the prey to the nest whole. The size of prey handled and the speed at which it is carried to the nest are remarkable. The workers defend their prey items from other ants, including S. invicta, and P. obscurithorax both wins battles and loses them.

Pheidole obscurithorax nests in soil in open areas, where it produces conspicuous nests, each generally with a single large (1- to 5-cm-wide) opening often covered by a leaf or other collected material (Storz and Tschinkel 2004). They prefer well-drained open areas and are an aggressive predator and scavenger, even able to maintain colonies near large colonies of Solenopsis invicta (Deyrup, Davis & Cover, 2000).

Major: large (Head Width 1.70–1.80 mm); medium to dark reddish brown; robust; with relatively short scapes (Scape Length/Head Width 0.50–0.59 mm); posterior half of head heavily rugoreticulate; anterior half of first gastral tergite heavily shagreened and opaque; petiolar node thick from the side and from above, as illustrated. 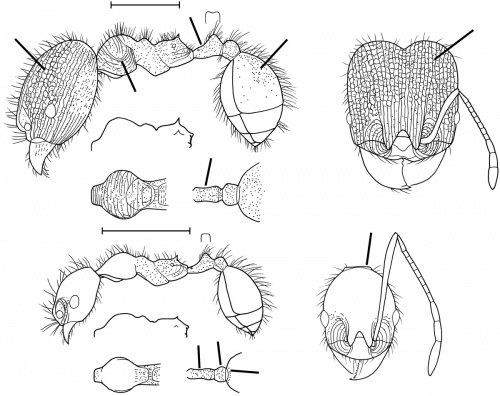