This is a locally abundant species that prefers pure sand, where it often builds crater mounds or nests at the base of grass clumps. According to Naves (1985), colonies are large and live primarily as scavengers, although they also occasionally collect seeds. Workers have been observed foraging as much as 8 meters or more from the nests. Minors forage singly at night, with majors often emerging from the nest to help carry back food. Nest-founding queens build vertical passageways to a claustral chamber 20–30 cm below the surface, and use the excavated soil of the chamber to plug the passageway. Naves observed rapid growth in incipient colonies: the first minors emerge in 30 days, the first majors in 50 days, with colonies growing to several hundred workers in 8 months. In New York winged queens are present in nests during July, and in Florida as early as May (Stefan Cover, unpublished records). Cover (personal communication) has also noted that morrisi “shows a fascinating variation in life history over its large geographic range. Populations in the northeast (Long Island and New Jersey pine barrens) have pleometrotic colony founding, and exhibit primary polygyny—one of the very few documented cases in the ants. Colonies are almost always monodomous. In the southeastern United States, morrisi is haplometrotic and monogynous but colonies are often polydomous.” (Wilson 2003)

Naves (1985) - P. morrisi is a common species in Florida It always nests in the ground and the colonies are quite large. It is a monogynous species and is primarily a scavenger.

Several nest founding females displayed singular habits in the laboratory which may not have been noted previously in this genus. In constructing the claustral chamber each female used the soil dug from the bottom of the vertical passageway to form a continuous plug of the passageway above her rather than bringing the soil particles to the surface. The claustral chamber at the 20 to 30 cm level below ground thus is entirely sealed from the surface by a long plug I interpret this habit as a defense mechanism against various predators during the claustral period The first workers are reared in about 30 days and the first majors in about 50 days.

The colony increases in size rapidly. In 8 months it can have several hundred workers and majors. The workers forage alone, although the majors can help to bring food back to the colony once food is located Workers can forage over 8 m from the nesting site. The species is mainly a scavenger but will also gather seeds.

From Wilson (2003): A member of the fallax group easily distinguished by the following traits.

Minor: yellow; propodeal spines reduced to right or obtuse angles; occiput slightly narrowed, with thin nuchal crest. The types of impexa differ from typical eastern morrisi in having two-layered gastral pilosity, flattened scape at the bend, and a more narrowly tapered petiolar node in the major. I have treated the form as a western geographic variant, i.e., from Oklahoma and Texas, but it may prove to be a distinct species.

Minor: yellow, with head and mesosoma a slightly darker shade than rest of body and appendages. 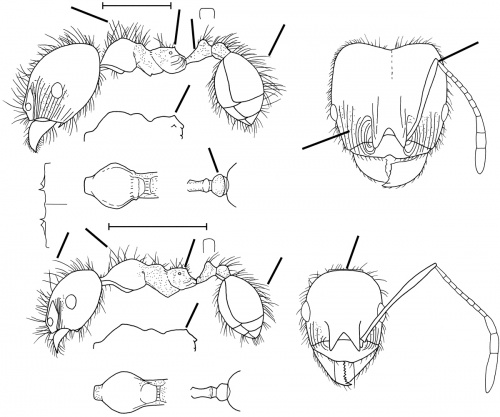