On Sanibel Island, Florida, I found colonies of moerens abundant, nesting in sandy soil at the base of trees in parks and around houses; and in Houston in a rotting tree limb on the ground of a park. Naves (1985) records nests in northern Florida from a wide range of sites, under boards, at the base of trees and fence posts, along tree roots, under palm leaves, inside wall crevices, but only rarely in the soil. According to Naves, the colonies are monogynous, with nuptial flights usually occurring in July. Colonies grow to populations of 600 or more workers, of which somewhat fewer than 20 percent are majors. In nature they feed on seeds and insects, the latter taken alive or scavenged. (Wilson 2003)

Deyrup, Davis & Cover (2000) consider this species to be introduced into Florida, where it is common throughout the state, including the western part where it occurs in both disturbed areas and mesic or moist woods. Pest status: none. First published Florida record: Wojcik et al. 1975.

Naves (1985) - P. moerens is a common species in north Florida Its color was observed in lab colonies to vary from reddish yellow to almost black due possibly to variation in the diet. Colonies fed with honey and seeds retained a lighter color than those fed with freshly killed house flies.

This species was found nesting in various places such as under boards, at base of oak trees and fence posts, along roots, under palm leaves, inside wall crevices, and rarely in the ground Usually small chambers are constructed. It is a monogynous species which has a small blackish female. Its main flight is usually in July. Several queens may start founding a nest, but before the first brood emerges, the dominant female will have killed the others.

The chambers usually are built with small soil or debris particles and have small openings. A colony may have over 100 majors and over 500 workers. They feed on seeds and scavenge and prey on small dead or live arthropods. They forage very close to the nesting sites and sometimes a major is found foraging along with the workers.

Deyrup, Davis & Cover (2000): Occurring throughout Florida in a great variety of habitats, this species may have already partially replaced Pheidole dentigula and Pheidole floridana. Nests are in rotten wood, in leaf litter, and in hollow twigs and nuts on the ground or occasionally arboreal, so P. moerens may compete for nest sites with native species in the genera Paratrechina, Solenopsis, Hypoponera, Strumigenys and Brachymyrmex. It seems likely that dense populations of this species have some effect on native insects that serve as prey, but the diet of P. moerens has not been investigated in detail in Florida. The general diet appears to be small arthropods and scavenged human food. This species rarely enters houses.

Major: variably reddish brown; occiput smooth and shiny, and most of rest of head carinulate, with a small patch of rugoreticulum just behind the antennal fossa on each side; intercarinal spaces on head sparsely foveolate, subopaque to feebly shining; anterior half of pronotum carinulate; postpetiole from above elliptical.

P. moerens is distinguished from Pheidole flavens by the broader smooth space of the occiput and feebler intercarinular foveolation on the head of the major, and especially by the darker color and more extensive sculpturing of the minor.

COLOR Major: medium reddish brown, with vertex a shade darker. Minor: body medium to dark brown, appendages brownish yellow. According to Naves (1985), the shade of color in laboratory colonies fed with house flies is darker than in colonies fed only with honey. 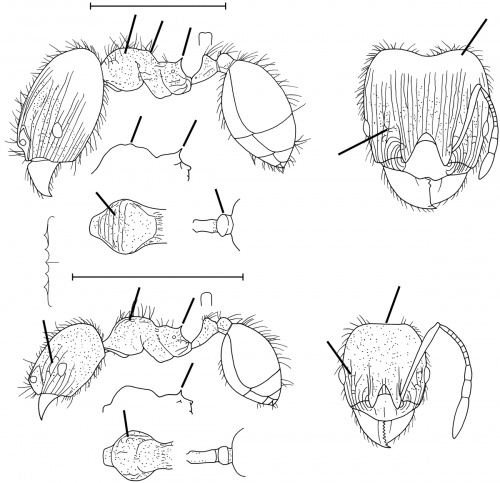