Brandao and Mayhe-Nunes (2001) - In Cincinnato R. Goncalves notebook we have found the following information: “# 482 - Mycetosoritis. Attini em revoada [in dispersion night]. Ibirapuera, Sao Paulo, SP, 10.x.1943. C. R. Goncalves.” He recorded the nest entrance as narrow and surrounded by a single low mound, made up of fine grains of earth. The fact that Goncalves collected these specimens while in dispersion flight suggests that he may have collected sexuals along with the workers we have found in the MZSP. Supporting this idea, we have found in Kempfs notes, records on males of an “unidentified attine genus,” supposedly belonging to this sample. However, all attempts made to locate sexuals of this sample failed. Sexuals from this locality with the same label number were not found at CELC, where most of Goncalves material has been deposited.

Unlike Mycetagroicus cerradensis and Mycetagroicus triangularis, M. urbanus does not have lateral clypeal teeth; M. urbanus share with M. triangularis the presence of two conspicuous median low irregular spines in the middle of the pronotum. Only the funicular segments I and VIII-X are longer than broad, as in M. triangularis, but the mesonotal protuberance is higher than in the other species. The M. urbanus frontal lobes are rounded, with their largest width posterior to the antennal insertions One paratype worker is a relatively aged worker, considering the material already accumulated over the integument: its mandibular teeth apices are very much worn out, suggesting that younger workers of M. urbanus may have much more acute and long mandibular teeth. (Brandao and Mayhe-Nunes 2001) 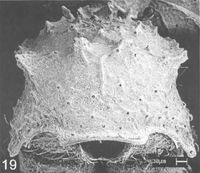 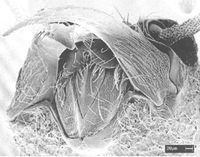 Head. Dorsal surface of the mandibles not so strongly sculptured as in the other species (some 20 rugulae in a straight line perpendicular to the mandible, at midlength), fading but not ending in a straight line as in M. cerradensis, each rugula blending with the superficial texture of the mandibles near the smooth flange at the masticatory margin. Masticatory margin of the mandible with an apical tooth and 6 sub-apical irregular teeth, the 3 apical ones rounded and more spaced, while the 3 basal ones are more prominent and closer to each other: outer border straight from the apical tooth level of the second basal tooth. Clypeus lateral regions near the base of frontal lobes without projections. Frontal area inconspicuous. Frontal lobes rounded, their largest width posterior to the antennal insertions. Frontal carinae slightly sinuous, fading well before reaching the occiput. Eyes with 10 facets across the greatest diameter. Antennal scapes surpassing the occipital margin by 1/6 of its chord length when laid back over the head as much as possible. Only funicular segments I and VIII-X longer than broad, the other subequal to each other.

Petiole, postpetiole and gaster. Dorsum of petiole with two low longitudinal ridges; in lateral view, triangular and acute; the node proper, as seem from above, slightly broader than long. Postpetiole slightly longer than broad in dorsal view; the posterior margin projected above the level of the postpetiole dorsum, in lateral view. Gaster hair pits as irregularly distributed as in M. triangularis, without dorsal keels.

We have chosen the Latin name urbanus because the only known sample of this species was collected at the main public park within Sao Paulo city.