Several samples collected by A. Gebauer in a bushy steppe habitat in the Southern Koko Nur Mountains (NE Tibet) in 1990/96 came from polydomous colonies.

As a member of the subgenus Coptoformica this species is likely to be a temporary parasite of another species of Formica, but its host is unknown.

Head more narrowed behind than in the typical Formica exsecta, so that the distance between the posterior corners is decidedly shorter than the width of the head at its anterior corners. The occipital excision is therefore narrower though quite as deep as in the type. Clypeus more flattened, not carinate posteriorly. Maxillary palpi as long as in the type. Epinotum with more rounded and convex base, which is as long as the declivity and passing into it without a distinct angle. Petiolar scale much narrower above than in the typical exsecta, its sides nearly parallel, the excision of the superior border quite as sharp and deep, semicircular. 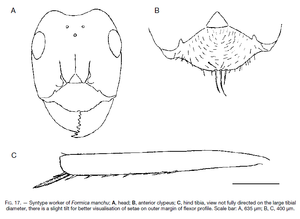 Body, especially the gaster, more opaque than in typical exsecta. Pilosity even less developed on the gaster. Color darker, the head black, except the cheeks, sides, gula and mandibles which are brownish red. The thorax, coxae and petiole are also brownish red, but the spot on the pronotum is black and more extensive than in typical exsecta. Gaster black; antennae and legs dark brown or in some specimens reddish brown.

Seifert (2000) - (Not seen, description according to Agosti 1989): “[...] Clypeus only at the anterior margin with a number of standing setae that have the same length as pubescence hairs. Eyes with standing setae. Head, mesosoma, petiole, and gaster without standing setae [few small setae are most probably present at the hind margin of third or fourth gaster tergite, B. S.], instead a homogeneous, long, subdecumbent pubescence is present. Hind tibiae with long, subdecumbent pubescence. Head surface shagreened with homogeneously scattered, fine, smooth, and shining punctures [...]”. Some morphometric data can be predicted from the average correlations between queen and worker data observed in Coptoformica and from transformation of some data of Agosti: ML 2315, CL/CW 1.030, SL/CL 0.960, EyeHL 46, nCOXA 1, TERG 3.5, nHTFL 5.5, sqrtPDF 5.3, sqrt PDG 7.5.