This species is a pantropical tramp, apparently easily introduced to new areas by human activities. It has a remarkably wide distribution, occurring in both mainland and island regions throughout the tropics and subtropics, and occasionally occurring in the temperate zone. Brown & Wilson (1959) suggested an African origin, but this was questioned by Bolton (1983). Colonies typically occur in highly disturbed or cultivated areas, beneath debris or dead wood on the ground (Longino, Ants of Costa Rica). It forms relatively large colonies of about 250 individuals (up to 350 individuals; Ito et al. 2010). Reproduction is exclusively by thelytokous parthenogenesis (Ito et al. 2010). Wilson (1954) reported it feeding on a wide range of small soft-bodied arthropods.

Longino (Ants of Costa Rica) - Mandible short and curved downward; dorsal mesosoma smooth or nearly so; pronotum sharply marginate anteriorly, marginate dorsolaterally throughout its entire length; with the head in full-face view and the mandibles fully closed the dorsal surface of each mandible basally with a very distinct sharp transverse edge or rim that extends across the width of the blade, parallel to and in front of the anterior clypeal margin; pronotal humeral hair absent; dorsal surfaces of middle and hind tibiae with decumbent to appressed short spatulate hairs.

Bolton (2000) - P. membranifera is mainly a pantropical tramp species, but it also occurs outside the tropics in favourable locations. Material examined subsequent to that listed in Bolton (1983) is from Sierra Leone, Egypt and U.S.A.. Type-data of the various synonyms record the species from Italy, Tunisia, St Thomas I. in the West Indies, Fiji Is, China, U.S.A. and Hawaii. Wilson & Taylor (1967) note its presence in Samoa. Kempf (1972) has Neotropical records from Puerto Rico, Costa Rica and Venezuela. In the U.S.A. membranifera has been recorded from Alabama, California, Florida (moderately common throughout the state (Deyrup, Davis & Cover, 2000)), Georgia, Louisiana, Mississippi and Texas (M.R. Smith, 1931; D.R. Smith, 1979; Deyrup, Johnson, et al., 1989; Cokendolpher, 1990). Deyrup (1997) records it from Bahamas.

Japanese records are generally from the south, ranging northwards to southern Honshu. The most northern record is from Tokyo (Kubota & Terayama, 1988). 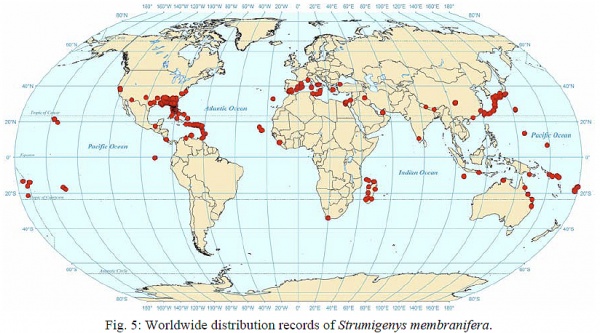 From moist forests to disturbed open areas, such as lawns and pastures.

Wilson (1953) studied two colonies in laboratory nests over an eight-month period. He reported this species accepted a wide range of small invertebrates. The following is a modified synopsis of additional observations:

These ants are the most active of the dacetines studied and show unexpected pugnacity under certain conditions. Japyx and termites were frequently attacked in the artificial nests with a viciousness approaching that of some of the more aggressive larger myrmicines. The little dacetines actually rushed at these insects when they contacted them, seizing hairs or appendages and doubling up in an effort to sting.

Although they lacked long mandibles to be used as a weapon of shock, they were able to panic fairly large individuals and dispose of them as quickly as dacetines with long mandibles. Since insects combated in this fashion were rarely eaten, it is assumed that such aggressive behavior is used in the defense of the nest.

Stalking of Collembola is in an entirely different mood and is usually executed cautiously and with deliberation. Workers rarely recognize an insect until they come in contact with it, but are very sensitive to nearby movement and probably depend a great deal on this in spotting prey.

As soon as the worker becomes aware of the presence of a collembolan, it "freezes" in a lowered, crouching position and holds this stance briefly. If the collembolan is to its back or side, the worker now turns very slowly to face it. Once it is aligned with the collembolan, it begins a forward movement so extraordinarily slow that it can be detected only by persistent and careful observation. Several minutes may pass before the ant finally maneuvers over less than a millimeter's distance to come into a striking position, and it may be remain in this position for as much as a minute or more. During this time the collembolan may move away for one reason or another, in which case the ant rarely attempts to follow but begins to forage anew. Workers open their mandibles only to about a 60° angle. Tactile labral hairs are present and eventually come to touch the prey. The mandibular strike is sudden but lacking a long mandible it is usually directed at an appendage and does not have the same stunning effect on the collembolan. Captured insects often struggle vigorously to escape, but the ants are very tenacious and retain a fast grip until they are able to sting their prey into immobility.

Unusual behavior in foraging workers was sometimes observed. Occasional bold workers were seen to approach their prey rapidly and attempt to seize a hair or appendage, and these were frequently successful. Sometimes workers would "freeze" when Collembola were moving rapidly around them and wait without moving, apparently in anticipation of ambushing the animals as these blundered into their mandibles.

Development times (constant temperature of 27 C) in days were found to be: egg-13, larvae-19 and pupa-19

This species is relatively adaptable in its nesting requirements being found in many different situations that vary from forest litter to under bits of slate in a cultivated field. Its moisture requirements are not as strict as for many congeners, and membranifera venture into relatively dry, open soil.

In Florida this species often occurs in open areas such as pastures and lawns. Although a form of this species was described from specimens apparently collected in the southeastern U.S. in the 1800's (Brown 1948), the first published Florida record seems to be that of Smith 1951; earlier specimens: 1943. (Deyrup, Davis & Cover, 2000.)

Masuko (1984) observed and reported on what he called "body smearing behavior" in S. membranifera and other Strumigenys species (see Strumigenys behavior).

Tang et al. (2019): This is a species restricted to habitats with frequent disturbance, particularly within lowland areas (Hong Kong Airport, Disneyland, and Mai Po Nature Reserve) covered with grasslands or remnants of forests within urbanized matrices. One alate female was collected in a Malaise trap between the June 13–27, suggesting potential swarming during this period in Hong Kong. Elevation ranged from 1 to 29 m, with the exception of an alate gyne collected at an elevation of 142 m.

The record of this tramp species in Hong Kong is not surprising considering its widespread range in the region and previous records in the nearby provinces of Guangdong and Fujian as well as from Macau for 90 years (Wheeler 1928), while extending further west in China to Yunnan. Considering the widespread range of this species in tropical and subtropical regions, it appears likely that this species is already present in two other provinces of China: Guangxi and Hainan. Future sampling efforts, in particular within urban habitats, could support this hypothesis.

Sharaf et al. (2015) - A single specimen was found in a semidry soil at the edge of an irrigated area which was planted with Bermuda grass (Cynodon sp.) and some trees of Pritchardia lanaiensis Becc. & Rock (Arecaceae). The single specimen was collected by sifting soil. Despite hours of observing, sifting, and digging soil in this area, no additional specimens were detected.

The only available study on the invasive ant species known from the Arabian Peninsula was by Collingwood et al. (1997) treating those for the UAE. These authors listed 15 introduced ant species. The discovery of S. membranifera in nearly dry soil located adjacent to an irrigated field of cultivated Bermuda grass is similar with other by reports by Wilson & Hunt (1967), Derup (1997), and Ordóñez-Urbano et al. (2008), who indicated that the preferred habitat of the species was semidry soil of exposed lawn and pastures. However, in Saudi Arabia, Sharaf et al. (2014) reported this ant foraging in date palm orchards with relatively dry soils with decaying dates.

Bolton (2000) - The single species of this Strumigenys membranifera-group previously constituted the genus Trichoscapa in the sense of Brown (1948b) and Bolton (1983), now abandoned (Bolton, 1999).

Mandibles in full-face view and at full closure short triangular, serially dentate and the masticatory margins engaging throughout their length. Dorsal surface of mandible sharply depressed immediately behind the level of the basal tooth, the rim of the depression appearing as a sharp transverse edge that traverses the width of the mandible immediately behind the level of the basal tooth, and paralleling the anterior clypeal margin. The transverse edge appears to be followed proximally by a deep transverse groove or impression immediately in front of the anterior clypeal margin. In profile dorsal surface of mandible arched-downcurved from clypeal margin to apex. In ventral view outer margin of mandible with a shallowly rounded prebasal inflected angle. MI 16 - 20.

Dentition. Basally with a dental row of 7 sharply triangular teeth of which 1 - 5 are slightly taller than 6 - 7, followed distally by 4 minute denticles and a slightly enlarged apical tooth, giving a total dental count of 12.

Basal lamella of mandible truncated-triangular, not in the same plane as the principal basal dental series but located below and slightly behind the basal tooth; not visible in full-face view with the mandibles closed.

Labrum terminates in a pair of narrow elongate triangular lobes.

Clypeus with anterior margin broad, transverse to extremely shallowly convex. Lateral margins of clypeus approximately straight and more or less parallel. Anterolateral clypeal angles located much further laterally than the point at which the outer margins of the mandibles intersect the anterior clypeal margin.

Clypeal margins and dorsum with minute appressed pubescence only, appearing naked under normal magnifications. In ventral view the lateral clypeal margins extending well beyond the outer margins of the fully closed mandibles through the basal third or more of their length.

Preocular carina visible anteriorly in full-face view but behind level of frontal lobes concealed from view by frontal carina.

Ventrolateral margin of head between eye and mandible marginate, the margination curving shallowly upward anteriorly from the eye; not terminating anteriorly in a tooth. Postbuccal impression small and inconspicuous.

Cuticle of side of head within scrobe finely shagreenate or punctulate.

Scape short, SI 51 - 57, dorsoventrally flattened, the dorsum and ventre converging anteriorly so that the leading edge is a sharp flange or even a thin lamella. Ventral surface of scape behind the leading edge concave.

Leading edge of scape with a row of large spatulate hairs, one or more of which are curved toward the base of the scape.

Propodeum with a broad lamella running down the declivity; lamella incorporating the propodeal teeth which are indistinguishable except for a minute apical point.

Spongiform appendages massively developed on waist segments. Base of first gastral stemite in profile with a distinct pad of dense spongiform tissue.

Sculpture. Dorsum of head behind clypeus finely reticulate-punctate. Dorsum and sides of alitrunk mostly to entirely smooth and shining; disc of postpetiole smooth.