Its conspicuous nests and abundance make this an iconic ant of the southwestern United States. This species constructs conical pebble mounds with internal chambers and galleries, with basal entrances, and with peripheral clearings. The colonies are very populous and the workers pugnacious. Pogonomyrmex occidentalis is an active harvester which feeds upon and stores great quantities of seeds. Their nest cones can be seen in aerial photos and have been recorded as persisting for more than than forty years. As each colony is headed by a single queen and will die off once the queen is lost, queens of this species may therefore live more than forty years.

Although rather closely related, Pogonomyrmex maricopa and Pogonomyrmex occidentalis are readily distinguishable by a number of strongly contrasting morphological and behavioral characteristic. P. maricopa nests normally only in sand or loose sandy soils whereas occidentalis occupies soils of a notably tighter texture and generally of a gravelly type. Narrow edaphic amplitudes of these species seem to be the rule. 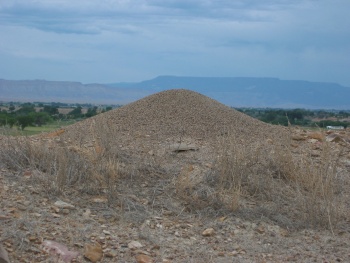 This is a common and, due to their large gravel mounds, conspicuous apecies. Foragers are active during the day, retreating into the nest or into protected sites during the hot part of the day. During the night the ants often block the nest entrance with pebbles. It feeds on seeds and dead insects. It is a very aggressive species and can inflict numerous painful stings in a surprisingly short period of time. Mounds play a role in thermoregulation of the nest. Surfaces exposed to the sun are warmer. The nests are usually covered with pebbles, snail shells or even Indian beads and fossil mammal teeth. The function of the gravel is unknown, but may protect the mound from erosion or may mark the entrance hole (in species with no mound or smaller mounds) to make it easier to find. Monomorium minimum may be found in nests as is the scarabaeid beetle Cremastocheilus saucius. (Mackay and Mackay 2002)

The mounds of P. occidentalis are built of two types of material: (1) the soil which the ants have excavated in the construction of the subterranean portion of the nest and (2) the fine gravel collected from the surrounding soil surface and placed on the mound. Where gravel is not available a wide variety of substitutes is used. In North Dakota we (Wheeler and Wheeler, 1963) found gypsum, selenite, lignite, petrified wood, empty snail shells, plant debris, and pellets of soil. Paleontologists have collected teeth of small extinct mammals from the surface of mounds. It is even rumored that early prospectors found small gold nuggets, but we were never so lucky. The function of the gravel coating of the mound is probably to prevent erosion by strong winds and torrential rains. Because of the large volume of dead air space (chambers and galleries) the mound also serves as a regulator of temperature.

Surrounding the mound was a bare area or clearing, which (in North Dakota) reached 3 m in diameter; the average was 1 1/2 m. According to Cole (1932a:140) this was "due to the destruction, by the worker ants, of the vegetation closely surrounding the mounds. The plants are literally 'chewed-down', bit by bit, from the apex to the base." He concluded that the clearing protected the mound from grass fires. We would suggest also that the bare area surrounding the mound makes the sunlight more effective earlier in the day. It must be kept in mind that P. occidentalis occupies a range of cool nights (even in summer) and hot days. Earlier rising enables the workers to get their day's work done before the midday sun in summer heats the ground to lethal temperatures.

In warm weather in North Dakota the workers of P. occidentalis stayed inside the nest during the hottest part of the day, but the entrance remained open. At night the workers retreated into the nest and closed the entrances. Any ant that did not get back in time had to stay outside all night. Workers and the queen overwinter; there is no brood at this time, nor are winged (sexual) forms present. The workers cluster in masses and in a comatose condition, but they revive quickly when warmed; many will survive freezing temperatures overnight. The greatest depth at which ants were found in winter in Wyoming was 277 cm (Lavigne, 1969).

Lavigne reported (1969: 1167) that the actual counts of workers in the 33 nests he excavated varied from 412 to 8,796. There was no direct relation between the size of the mound and the population of the nest. This might be due in part to the fact that small colonies have been known to move into larger abandoned nests.

We had samples of seeds taken from 16 nests in North Dakota. The number of species we found in a nest at the time of collection ranged from 1 to 9. The seeds collected by all the colonies studied were from 30 species of plants (Wheeler and Wheeler, 1963: 116).

The enemies of this ant are lizards and birds. Several species of rodents have been reported robbing the seeds stored in the chambers of the mound.

The myrmecophilous beetle Araeoschizus armatus Horn (Coleoptera: Tenebrionidae), was found in a colony.

Type locality: Colorado Territory. A.N.S.P. Unless otherwise noted the text for the remainder of this section is reported from the publication that includes the original description.

Contour of thorax, petiole, and postpetiole, in lateral view, as shown in Pl. VI. Fig. 1; surface between apex of anterior mesonotal declivity and base of epinotal spines notably flattened; mesonotum usually distinctly elevated, but sometimes only slightly, above level of pronotum, the promesonotal contour not smooth and even. Epinotal armature generally a pair of long, slender, tapered, pointed spines, but sometimes spines are short or of medium length, more robust, even or u neven in length. Venter of petiolar peduncle without a prominent process. Contour of petiole and postpetiole, viewed dorsally, as in Pl. VII, Fig. 1.

Interrugal spaces of head densely and coarsely punctate and opaque, the punctures producing a beaded appearance; interrugal spaces of thorax densely punctate and opaque, the punctures not obscuring the rugose surface; dorsum of petiolar node generally rather coarsely and irregularly rugose, densely and finely punctate, opaque; rugae of dorsum of postpetiolar node usually sparse, fine, with a transverse trend, confined largely to posterior portion; dorsum of petiolar and postpetiolar nodes sometimes only densely punctate. Base of gastric dorsum with light to moderate shagreening which does not dull the shining surface. Body color light to medium ferrugineous red.

Largely with the characters of the worker. Contours of thorax, petiole, and post petiole, in lateral view, as shown in Pl. IX, Fig. 1. Epinotum armed with a pair of short, acute spines.