Paraponera clavata is a very large (> 2 cm long) and potentially aggressive ant of the New World tropics. Known within its range as the "bala" ant they pack a powerful sting. Workers forage arboreally at all heights in the canopy; nests are subterranean at the bases of trees, or occasionally in humus accumulations in the canopy; workers forage on live prey and extrafloral nectar; males are frequent at blacklights.

Wetterer (1994) - P. clavata usually nest at the base of trees, but some have arboreal nests (Breed & Harrison 1989). Colonies can grow to have more than 2000 workers (Breed & Harrison 1988). Workers usually ascend their nest tree to forage in the foliage of the canopy and understory. Foragers most commonly return to the nest carrying drops of liquid in their mandibles, but they also bring back plant parts and captured invertebrate prey (Young & Hermann 1980, Bennet & Breed 1985). Foragers collect plant extrafloral nectaries (Young 1977). Janzen and Carroll (1983) observed P. clavata workers guarding and collecting nectar from extrafloral nectaries of Pentaclethra macroloba and other plants.

Morrison (2018) found cane toads were a major predator of P. clavata. Toads were observed sitting adjacent to nests and eating up to an ant a minute. The predation was deemed to have caused the demise of 5 of 12 observed nests in the Panama study area.

Alex Wild provides the following notes on the sting of this ant:

I was stung by a bullet ant last week in Costa Rica. On purpose. How did it feel? Bearable. Given this species’ fearsome reputation, I was expecting worse. It certainly hurt, though.

It wasn’t just the initial sear from the sting’s penetration, imparting all the sharpness one would anticipate from a relatively large hymenopteran, but the way the pain sank beneath the skin.

The bullet ant has a reputation for feeling like a firearm wound. Having never been shot, I can’t make much of the comparison. I imagine an actual shooting would be far more traumatic, but all the same I understand where the name comes from. A Paraponera sting feels more profound than the average insect sting. Like tissue or bone damage, it is a deep throbbing ache that crescendos over several hours. Unlike a honey bee sting, whose sharpness gives way quickly to a dull itch, the bullet ant’s sting is the gift that keeps on giving. Less a gunshot, I suppose, than the lasting pain following a solid crowbar to the arm. Although bearable, mine still ached when I went to bed 8 hours later. All pain was gone in the morning.

We tend not to make much of where on the body we’re stung, but stings are like real estate. Location, location, location. The forearm is a relatively mild substrate, a safe place to experiment with stings. I was once zinged on the tip of the nose by a common honey bee. Holy bejeezus. I’ll take twelve bullet ants to the arm before I wish to relive that one.

Founding queens need to hunt before the first generation of workers become adult (i.e. non-claustral foundation). Trophic eggs were observed to be laid by first workers and given directly to medium and mature larvae (Peeters 2017). 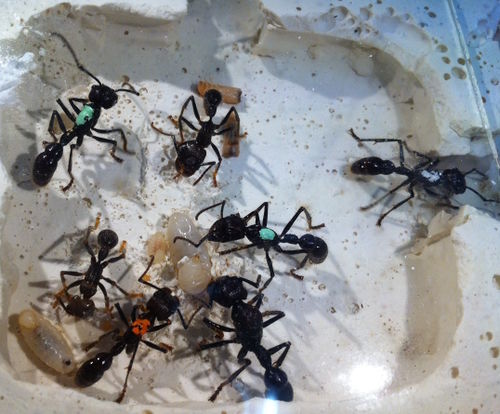