Found in clearings and secondary growth throughout the Indo-Pacific.

Sorger & Zettel (2011) - Odontomachus simillimus can be easily recognised even in the field by small size, dark colour, proportionally large head and short scape. In the Philippines, there is no other species with a short, truncate subapical tooth of the mandible, and none with fine reticulation on visible part of gaster tergite 2 (but note that the anterior part of tergite 2 which is usually covered by tergite 1 is also reticulate in other species).

Odontomachus simillimus is surprisingly uniform over its large distribution area. It is distinguished from the second Old World species, Odontomachus troglodytes from Africa, Madagascar, and the Seychelles, by its smooth gaster tergite 1.

Satria et al. (2015) - Odontomachus simillimus is easily separated from the other Sumatran species of the genus by the following characteristics of the worker: subapical teeth blunt and short; palp formula 4, 3; pronotal disc and first gastral tergum with several long erect setae. This species is also distinguishable from the other Sumatran species by the following characters of the male: palp formula 6, 3; dorsal outline of clypeus in lateral view much convex; propodeum in lateral view with its dorsal outline angulate; disc of 9th abdominal sternites broader than long, almost as long as apical lobe, with straight basal margin; apical lobe slightly narrower in basal half, with apical margin weakly convex; telomeral apex in lateral view as long as high; vental margin of valviceps with 34–36 denticles; body largely blackish brown, with mandible and small area of clypeus and anterior of head yellowish, and antenna yellowish brown.

Fisher and Smith (2008) - Workers and males are very similar in morphology and size to Odontomachus troglodytes. Bivariate plots of metric measurements did not distinguish the two species. Workers and queen have fine, glossy dorsal striation on head and mesosoma. Metasternal process low and rounded. Metasternal process can be viewed in mounted specimens by removing a hind leg and coxa. Brown (1976) provides a description and references.

Sorger & Zettel (2011) - Widely distributed from India to Polynesia (Wilson 1959, Brown, 1976), “undoubtedly many of the island records represent accidental introductions by man” (Brown 1976: 87). No distribution limit in the Philippines; records from 21 islands (19 in this study).

Sorger & Zettel (2011) - Odontomachus simillimus is a common species which also can be found in open or moderately to strongly disturbed habitats, like coastal areas, coconut groves, villages, and even lawns on university campuses. It usually does not enter dense forests, but can be occasionally found on banks of stream running through forests. According to collections by Chapman in eastern Negros, the species can be found from sea level up to an elevation of 900 m (Wheeler and Chapman 1925). 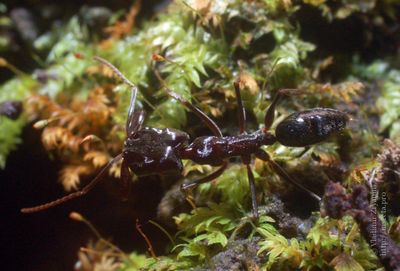 Satria et al. (2015) - Odontomachus simillimus is a common species in gardens and green patches in residential zones, plantations, and secondary forests. Nests are usually found in the soil near the base of living trees, and under shelters (such as stumps, rotten logs and rocks), but sometimes under paved floors around houses.

In Bali, we found two colonies of O. simillimus near the base of living trees in a cacao plantation which coexisted with colonies of the myrmicine Pheidole ghigii. However, the coexistence between the two species seems to be occasional because we have not yet found such cases in Krakatau and Sumatra. Any other ant partner of O. simillimus has not yet been found.

Type-localities are give as Fiji, and secondarily Ceylon (= Sri Lanka). As far as can be ascertained, all the types were queens. I can find no trace of any Smith material from these localities at Oxford University Museum of Natural History, where the only specimen present in Smith’s collection is a dealate queen from Waigeo I., New Guinea.

In The Natural History Museum there is a single, damaged queen from Ceylon which may be one of the original type-series, labelled “Ceylon. 50/56,” and also with a “Farren White” label. Acc. Reg.: “1850 no. 56 (June 17) Ceylon. Presented by Dr Joseph Hooker FRS.” In addition, The Natural History Museum has a single, headless, alate queen from Fiji, without further data, that may be one of the original specimens.

Known though most of the literature as O. haematode (Linnaeus) 1758, which is a different species (Fisher and Smith 2008).

Pilosity: Fine white semi-appressed pubescence on entire body, very dense on appendages including petiole, on mesosoma, head and gaster distance between hairs approximately their length. Few standing setae on pronotum, several standing hairs on gaster increasing in length towards apex of abdomen. Some isolated hairs on head venter and one pair of standing setae on head dorsum.

Colour: Body, including all appendages, dark brown (almost black in some specimens).

Vertex with a pair of long erect setae; frontal lobe without seta; pronotal disc and first gastral tergum with long erect setae, as long as setae on vertex. Head (except its venter), mesosoma, petiole and gaster with dense subdecumbent to decumbent pubescence; venter of head with sparse appressed pubescence.