This subterranean ant nests in soil under stones and in rotten stumps. It may makes small soil mounds in forests and in small treefall gaps. Like many species in the claviger group, L. subglaber is thought to feed on honeydew secreted by root-feeding aphids. But also like other species in the claviger group, it has been rarely studied in the field. (Ellison et al., 2012)

Ellison et al. (2012) - All species in the claviger group smell like citronella when disturbed or crushed. Lasius subglaber can be confused with Lasius claviger and Lasius interjectus, as all three have sharply pointed petioles, but L. subglaber uniquely has few erect hairs on its body and virtually none on its cheeks. The erect hairs that are present on its body are short and wispy, unlike the long, robust erect hairs of the other species in the claviger group.

The known range extends in a band from Saskatchewan and the Black Hills of South Dakota, east to central Maine and southern New York, with a southern extension into eastern North Carolina and northern Georgia. 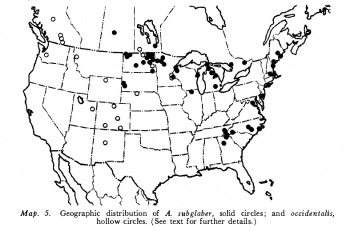 This section regarding this ants biology is reported, slightly modified, from Wing (1968).

Field notes were available for 15 samples that I had collected in Maine, Minnesota, and North Carolina. In addition, 6 of the samples sent to me for study had associated biological data. The summary below includes the data on these 21 samples plus some notes from the literature, where identity of species could be verified. The sample of workers from Morehead City, Carteret Co., North Carolina, reported by Carter (1962b) as claviger, is subglaber. About 2/3 of the colonies were collected in woods or in small clearings in woods; the rest were found nesting in the open. Stones formed the immediate cover for nearly 1/2 of the nests, with low but often sizable mounds accounting for about 1/4 of the colonies. The rest were found nesting in soil associated with stumps, logs, roots, etc. Perhaps the most unusual nest was one located west of Old Town, Maine in an open area overgrown by Crataegus bushes. I found this populous colony nesting in an abandoned Formica exsectoides mound. These mounds were common in the area, but all that I checked other than the nest in question were populated by exsectoides. The Lasius subglaber colony occupied the approximate half of the nest that faced southeast, and the rest of the mound was totally unoccupied. The chambers and galleries dug or reconstructed by the subglaber workers extended well into the ground. Several other subglaber nests in the immediate area were situated in the shade of an overhanging bank; all but one of these nests were covered by stones. The 21 samples of subglaber from throughout the range appeared to show no more than random association between the type of immediate nest-cover and whether the nests were in woods or in the open. Kannowski (1956) gives notes on a nest that he collected on the North Dakota prairie. The altitudinal range for the subglaber samples was from about sea level to 5000 feet. Most nests were collected at low altitudes, usually well under 1000 to 1100 feet. However, some of the few collections from the Black Hills of South Dakota, western North Carolina, eastern Tennessee, and northern Georgia ranged up to about 5000 feet.

Dated samples with one or both sexual forms numbered 25. Several colonies with queen pupae or callows were found in the last half of July. Adult alates associated with workers had the extreme dates of July 28 and September 7. Dates for alate queens not associated with workers ranged from August 1 to September 21. A single dealate queen was found overwintering under trash in woods in Sampson Co., North Carolina on November 22, 1954. Wheeler (1908) reported nuptial flights on July 23, but the only MCZ specimens that I have seen bear the date of July 28. In either case these flights were probably somewhat earlier than is usual for this species in most years. The 25 samples indicate that flights usually begin in early August and perhaps extend into September in some years.

Virtually nothing is known about this taxon. One literature reference, which is something of an enigma, gives evidence for polygyny in subglaber, latipes, or latipes × claviger. Gaige (1916) reported the collection on June 13, 1914 of a small latipes colony on Whitefish Point, Chippewa Co., Michigan. He stated that the colony contained about 50 workers and 2 dealate queens. The nest was beneath the bark on the underside of a rotten log. The only specimens that I received for study from this sample were 3 workers belonging to subglaber. The identity of the queens remains uncertain. If they were actually latipes or latipes × claviger this would account for the sample determination of latipes. Either of the two queens then considered to be dimorphs of latipes are so distinct that a mistake could hardly be made in their determination. Once Gaige had seen the queens, he probably gave the workers a cursory glance at most. In making routine determinations of samples, many of us are often guilty of depending solely on distinctive queens - an excellent way, of course, to miss recognizing mixed colonies. Whatever the identity of the queens, polygyny is indicated. If, however, the queens were not subglaber, then workers all or partly referable to subglaber would suggest a mixed colony with subglaber as the host species. 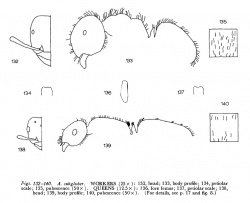 This taxon is known from only 2 collections made by R. Sanwald in Suffolk Co., Long Island, New York : Medford, August 1961, and N. E. Patchogue, September 1960, in moist open woods.

Crest of petiolar scale often with a median notch. Pubescence dilute to moderate, denser on front of head than on dorsum of gaster. Color yellow to pale brownish yellow. 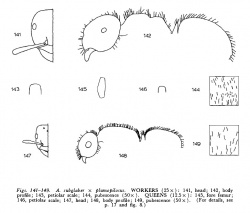 Similar to subglaber in general appearance and size, but with standing body hairs much coarser, strongly barbulate, and pubescence on antennal scapes conspicuously suberect.

Crest of petiolar scale moderate, often faintly emarginate. Pubescence moderate to moderately dense over most of body and appendages, but that on posterior dorsum of gaster dilute. Color yellow to brownish yellow.

Antennal scapes with pubescence loosely appressed to decumbent. Body and appendages with moderately dense pubescence except on posterior dorsum of gaster where it is fairly dilute. Crest of petiolar scale moderately blunt, not emarginate. Color brown, more or less like that of darker claviger queens.

Wing (1968) - Type locality: Washington, D.C. Location of types: A queen, a worker, and a male in the American Museum of Natural History the following data: Washington, D.C., Aug. 2, 1891, No. 386. These three specimens, labelled "co types", were presumably collected by T. Pergande. Creighton (1950) stated that types were in the National Museum of Natural History and AMNH. However, the USNM material sent to me for study did not contain any subglaber types. There is material in the Museum of Comparative Zoology that bears a type label. These "type" specimens were given to the MCZ by the Curator of the Emery Collection; they represent a sample of the specimens collected by Wheeler at Rockford, Illinois. It thus appears that the only types located in this country are in the AMNH.