Gracilidris pombero and a tentatively assigned Dominican amber fossil species, Gracilidris humiloides, are the only known species of this genus.

In Bolton’s Identification guide to the ant genera of the world (Bolton 1994), Gracilidris will work through to the final couplet of the Neotropical dolichoderine key separating Linepithema and Azteca. Gracilidris will not key easily to either genus as it lacks the broad medial anterior clypeal concavity of Linepithema and does not match the mandibular dentition of Azteca. In Shattuck’s Generic revision of the ant subfamily Dolichoderinae (Shattuck 1992b), Gracilidris will key through to couplet 17 of the worker key but does not match either option given in that couplet for clypeal configuration. Of all the Neotropical ant genera, Gracilidris most closely resembles Linepithema, but can be distinguished by a more lateral position of the eyes on the head, the relatively longer antennal scapes, and the distinct posteriad curve of the petiolar apex. 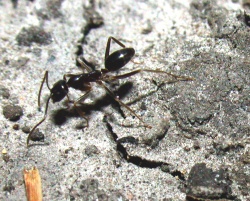 Feitosa et al. (2015) - Gracilidris was originally described based on specimens collected primarily along the so called South American dry diagonal, which includes the savannah lands of northeastern and central Brazil (caatinga and cerrado, respectively), and the chaco areas of Paraguay and Argentina (Prado & Gibbs, 1993). Until recently, it was thought that the extant lineage of Gracilidris was restricted to the low scrub forests and open fields of this dry diagonal. However, Guerrero and Sanabria (2011) provided the first record of G. pombero for the northern portion of South America, more precisely for the foothills of the Colombian Amazon Basin.

Gracilidris pombero specimens were identified among the ants collected in a long term ecological research (LTER) network (PELD Campos Sulinos – CNPq) at southern Brazilian grasslands. These grasslands occupy a transitional zone between tropical and temperate climates, with hot summers and cool winters, and are composed of several phytophysiognomies and extremely high plant species richness. Vegetation is characterized by an association of C4 and C3 grasses and a variety of forbs and shrub species. Cattle grazing is the traditional land use, which ensures the maintenance of typical grassland vegetation (Overbeck et al., 2007; Pillar et al., 2009).

The records of Gracilidris for Rio Grande do Sul represent the southernmost register of the genus in the Neotropics and the first for the Pampa Biome.

Worker morphology generalized, somewhat elongate. Worker caste monomorphic. Integument thin and covered in a dense, fine pubescence. Proventriculus small, weakly developed, and unsclerotized, without phragma or visible pile, and with a dome-shaped cupola divided into 4 quadrats. Proventricular cupola only partly obscuring the bulb in lateral view, and about as wide or only slightly wider than the bulb.

Pronotum and mesonotum freely articulating, not fused, and in lateral view forming a single continuous convexity. Pronotum rounded laterally. Propodeum depressed below the level of promesonotum. Dorsal and declivitous faces of propodeum subequal in length and meeting in an indistinct convexity. Propodeal spiracle located postero-laterally, at about 2/3 height of declivitous face.

(abdominal segment 2). With a distinct dorsal scale that is taller than broad, inclined anteriorly, and achieving height of propodeal spiracle. Apex of scale narrowed into a point and distinctly curved posteriad, so that in lateral view anterior face of apical third of scale is convex and posterior face is slightly concave. Venter of petiole with a weakly developed lobe.

Gracilidris refers to the slender habitus of this ant.