This is one of North America's better studied ant species. Many aspects of their basic biology has been examined and a variety of experiments have studied particulars about their nesting behavior, foraging and social dynamics.

Mackay (2000) - A member of the Temnothorax schaumii species complex. This is a small yellow ant with an 11-segmented antenna, which is very common in eastern USA. The very long, inwardly curved, closely spaced propodeal spines make this species immediately recognizable. The top and side of the mesosoma are covered with coarse rugae. The head is completely and coarsely punctate.

USA. Throughout the eastern United States, from Maine to central Florida, and westward through eastern North Dakota down through the eastern half of Texas. 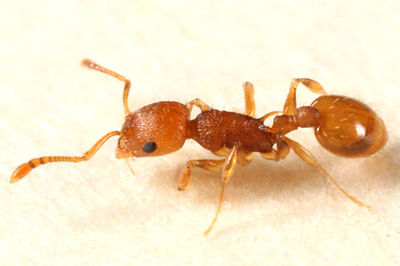 Colonies typically contain less than one hundred workers although an occasional nest can be found that exceeds this number. Roughly half of the queens survive the winter, for workers roughly two thirds to slightly more than one half survive from fall to spring.

Nests are located in preformed cavities in structures found in the litter, e.g., in small sticks or nuts. Temnothorax curvispinosus is facultatively polydomous and their nesting arrangements vary with season. In the productive summer months, colonies can fragment and be arranged across numerous nest sites. These vary in queen number, from multiple queens to those that only have workers and brood.

During the winter nests coalesce and typically are found in a single structure. In the northeastern hardwoods forests this will typically be a nut (acorn, hickory) or small twig in the leaf litter. Nest mortality can be significant. From one third to one half of all nests are gone by the end of the winter. Some of these losses are colony deaths while others represent migration to a new nest site, which likely occurs during warmer winter days.

Nests of T. curvispinosus were found by Gibson et al. (2019) in bird nests.

Queen number can vary by colony and season. New colonies are founded by pleoemetrosis and new queens are likely adopted into existing nests. The latter is evident from the presence within populations of both monogynous and polygonous nests. Reproductive queens contain 8 ovarioles.

New queens are produced in some queenless nests. These are presumed to be nests that are separated from a queenright nests or from a nest that had earlier lost its queen(s).

Kannowski (1959) noted the following concerning Temnothorax ambiguus reproduction in southeastern Michigan: "Alates were found in nests in bog communities from July 7 to August 6. In upland forest communities on the George Reserve, where curvispinosus is common, Talbot (1957, p. 451) found that alates were present in nests from late June to early August.

This species is parasitized by the slave-making ants Temnothorax americanus and Temnothorax duloticus and the workerless inquiline Temnothorax minutissimus (Beibl et al. 2005).

North America. As reported in Mackay (2000): One cotype worker in Museo Civico di Storia Naturale, Genoa [seen]. specimens could not be located in Roger's collection (Museum fur Naturkunde Zentralinstitut der Humboldt-Universitat zu Berlin). Unless otherwise noted the text for the remainder of this section is reported from the publication that includes the original description.

Mackay (2000): Mandible with apical and 1 or 2 subapical teeth well defined, others present as denticles; median anterior border of clypeus weakly convex. clypeus with well defined central, longitudinal carina and a few other, poorly defined lateral carinae; eyes very large, occupying most of side of head; ocelli well developed, diameters of all three greater than distance between them; scape short, extending about half distance to occipital corner; propodeal spines or angles absent, only indication is a poorly defined carina; petiole with low node, which is not much higher than peduncle.

Hairs erect and scattered on most surfaces, suberect on antennae and legs; decumbent pubescence sparse.

Sculpture consisting of rough, longitudinal striae on most of head, area posterior to eyes with concentric whorls, clypeus with central carina and poorly defined lateral carinae, sides of mesosoma mostly smooth and shining, but with a few rugae, propodeum mostly smooth, but finally striate, petiole striate.

Morphological. A reference to the inwardly curving propodeal spines of the workers.