In California this species has been found in chaparral, riparian woodland, oak woodland and mixed forest (with oak, douglas fir and pine). Isolated workers or nest fragments have been collected in litter samples and under stones. Because of their subterranean habits the workers are infrequently encountered, but males are not uncommon at light in late summer in some foothill localities. Foraging behavior is probably similar to that of S. pallipes workers from eastern United States, which have been reported feeding on centipedes and other soil arthropods. (Ward 1988)

Stigmatomma pallipes in the eastern United States is not a common ant but it can be discovered by turning over stones and searching carefully through rotten wood on the ground. These small, dark reddish-brown ants are about 1/4 inch in length. The eyes are very small, with only one or two facets. There is a row of small teeth on the anterior margin of the clypeus and the mandibles are long and linear with a row of bi-dentate teeth on the inner margin. The petiole is broadly joined to the gaster.

There is only one other eastern species, the rare Stigmatomma trigonignathum, which lacks the sharp projections that flank the outer bases of the mandibles in S. pallipes, and has the two most basal large teeth mounted on an inward expansion of the mandible. In the West, Stigmatomma oregonense, which is similar to S. pallipes, has an overlapping distribution in part of northern California (Ward 1988).

This species is widely distributed in the United States. It is known from Quebec, west to Wisconsin, south through Florida (Smith 1979) and then west and south, possibly in a series of disjunct populations, into the Coastal Range of California (Ward 1988). It found sporadically in the mountains of Arizona.

In the eastern part of its range the habitat of S. pallipes is usually moist woodland with a heavy canopy, but as Creighton pointed out (1950), the species may be subterranean, and therefore unobserved, in more open habitats. In Florida S. pallipes is usually found in sandy woodlands with thick leaf litter. It is seldom found in wet areas, such as the edges of marshes and swamp forests.

The small colonies are most common in wooded areas where they are found in rotten logs and under stones. In New England these ants are often found nesting under rock walls.

The workers are slow moving and not regularly encountered. The pupae are covered with a brown silk case that helps in identification in the field. The queen is worker-like and inconspicuous. The males and females mate during the late summer months. Females mate with males on rocks on the ground in forested areas during the first week of September in New England.

Nests are small, often far fewer than 100 workers, and diffuse. In the eastern United States workers have been found collecting centipedes and other soil arthropods. Prey are captured and held in the worker's heavily toothed mandibles, then paralyzed by a powerful sting. The crytpic foragers are not regularly seen above ground as they prefer to search for food in the same places where this species' forms their nests - in the soil, litter and decaying wood. Stigmatomma pallipes is a forest dweller throughout most of its range. In California this species has been found in chaparral, riparian woodland, oak woodland and mixed forest (oak, Douglas fir and pine) habitats. Isolated workers or nest fragments have been collected in litter samples and under stones. 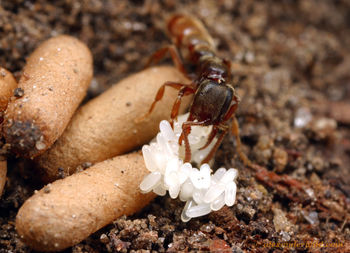 Haskins (1924) provides this account of their nesting biology: ....ordinarily found in thick, damp woodlands, the typical localities in which most timid hypogeaic forms find refuge. Although the majority of these forms seem dependent for their continued existence upon these forests, with their concomitant opportunity of escape from more dominant types, it is certain that pallipes has not become entirely so, nor has it completely lost the ability to exist in proximity with glade or even field forms. In Petersham, Massachusetts, a colony taken under a broad stone in an open clump of young white pine, which was nesting beside two species of open-woods ants (Lasius americanus and Aphaenogaster picea).

More than one individual may assist in subduing prey, but only one transports the prey. Back at the nest, the larvae move onto the prey or are carried to it. The prey is not dismembered. Workers do not regurgitate food for larvae or for each other. The queen supplements her diet by periodically squeezing a larva until a drop of clear liquid is regurgitated. In most ways, queens and workers show few behavioral differences, except that functional queens do not forage. Workers do not change tasks as they mature. The organization of the colony is not completely understood, but circumstantial evidence suggests that groups of 9-16 workers form small colonies with one or more queens, and these colonies in turn fission when the group increases after the emergence of reproductives and workers in late summer: Within an area, the workers from apparently isolated colonies are compatible. Alates leave the nest to mate, but females usually return to the nest after mating. Alate females probably occasionally disperse and found new colonies removed from the parental population.

This species nests under stones in moist areas. Colonies apparently consist of only a few workers. They prey primarily on chilopods. These secretive ants are rarely collected, but well worth the search (Mackay and Mackay 2002)

The highly modified mandibles appear to be specialized for hunting centipedes. Predators of centipedes and beetle larvae in forest litter. James Trager observed workers and larvae of this species under a stone in Missouri USA, feeding on an Elateridae (beetle) larva, which appeared to have been killed by them (fresh, no external damage evident on the larva, except where the larvae were chewing into the intersegmental membranes).

It is possible that Strumigenys species are most often found under the same stone.

Peeters & Molet (2010) - Unlike in Amblyopone australis, queens and workers of S. pallipes are similar in body size, and workers show no variation in size.

Minutely punctured, dull reddish-brown, terminal segments of the abdomen, antennae, and mandibles, paler; legs testaceous. 6 mill. long. Head subquadrate, narrowing posteriorly; mandibles widest in the middle, direct, with the tip incurved, inner margin coarsely serrate-dentate: pronotum inflated, with an impressed mesial line : abdomen divided into three principal segments, of which the first is subglobular, the second considerably larger, conical, largest posteriorly, terminal segment of equal diameter with the preceding, but twice as long, with a dark indistinct transverse band about the middle: provided with a sting.