A member of the mimicus group of the Myrmecoystus subgenus Endiodioctes.

Snelling (1976) - Mating flights most frequently take place in late afternoon following a soaking rain, but morning flights do occur. According to Wheeler (1917) incipient colonies of this species are pleometrotic, an observation I have never been able to confirm. Although I have discovered numerous founding females, all were in individual burrows. Nor, in the many nests studied, have I ever discovered more than a single fertile female in any of these. Pleometrosis, if it does occur in this species, must be very uncommon.

The brief notes published by Wheeler (1908) are based on more than one species, as he had confused Myrmecocystus depilis and Myrmecocystus romainei with mimicus. The nests are commonly located in pebbly or clayey soil, with the latter apparently preferred. Although Wheeler described the tumuli as "... regular craters 10-15 em. across at the base and 3-4 em. high ..." his Fig. 13 shows a simple hole in adobe soil with the excavated material thrown out in a low, irregular crescent. In my own experience the usual condition is well illustrated in that photograph. Regularly crateriform tumuli sometimes are constructed, but they are rare. Often, the entrance is concealed in a dense clump of grass, with the excavated soil cast up about the clump in a manner reminiscent of the irregular superstructures of some Lasius and Formica. This is the only Myrmecocystus studied which commonly has the entrance concealed in a grass clump.

This is a diurnal species, foraging most actively during the middle part of the daylight hours. As with all species of Endiodioctes, Myrmecocystus mimicus is a general scavenger. It avidly visits flowers for nectar and has been observed in attendance on aphids. Repletes of this ant were recorded (as lomaensis) by Wheeler (1912) from Pt. Lorna, California, and I have taken them from nests in various states.

In New Mexico (Mackay and Mackay 2002) - Nests range from a hole hidden at the base of a desert plant to a normal crater surrounded by pebbles or a mound as is found in other species in the genus. Foraging occurs during the day with the workers scavenging on dead arthropods or preying on living insects and feeding on nectar in flowers. This species also tends aphids. Workers are timid and rapid. Mating flights occur late in the afternoon after a significant rain event, although flights may occur in the morning. Several queens may start a single nest, although this is apparently uncommon.

This species is a host for the fungus Laboulbenia formicarum (a pathogen) (Espadaler & Santamaria, 2012).

Snelling (1976) - The type series of this ant, from Albuquerque, New Mexico, is mixed. It includes workers of Myrmecocystus romainei. I have seen none of the six males mentioned by Wheeler as part of the type series; the brief description of that caste would apply equally well to either species.

In selecting a Lectotype for this species I have been guided by expediency. The use of this name has been more or less uniformly applied since 1908. In 1950 Creighton placed var. jesuita and melliger subsp. lomaensis in synonymy with mimicus. I have chosen as Lectotype, therefore, a specimen which supports these interpretations. The alternative would have been to transfer the name to a wholly different species (romainei of this revision) and to resurrect jesuita for the species long known as mimicus. The former choice is least confusing.

The synonymy of jesuita was adequately discussed by Creighton. It is sufficient here merely to state that jesuita is the same as mimicus in the sense of the present study. When Wheeler (1912) described lomaensis he treated it as a subspecies of Myrmecocystus melliger. The characteristics by which it was to be separated from mimicus, also regarded as a subspecies of melliger, will not hold, as correctly noted by Creighton. However, it should be observed that there are differences between the California form and that of New Mexico and Texas. In both males and females of the eastern populations, the hairs of the mesopleura are uniformly quite short and well separated. The mesopleural hairs in the California populations are variable in length, many hairs up to 0.23 mm long, about twice the length seen in specimens from New Mexico and Texas.

Also noticeable in the sexual forms is relatively smaller eye size. Among the western females the malar area is 1.50-1.58 x the EL; in females from Arizona and New Mexico, the range is 1.10-1.43. A similar situation exists among the males studied: 0.78-0.84 in those from California, 0.70-0.75 in those from eastern parts of the range.

The population differences noted are not confined to the males and females, but they are more obvious in these castes. Western workers (lomaensis) do differ from their eastern counterparts. In these, the frontal lobes are more extensively and more abundantly punctate; the punctures extend well up onto the frons and they are mostly separated by two puncture diameters or less. In specimens from New Mexico and Texas the punctures do not extend onto the frons and the intervals between punctures are three to six times a puncture diameter. There is also a tendency among larger workers, in some California samples, to possess more abundant pubescence on the third tergum than is normal. Some samples from the area around Rodeo, New Mexico, are similar.

These differences are interesting, but difficult to interpret. They may represent another example of character displacement. In this case the species displacing against mimicus may be the closely related, and broadly sympatric, Myrmecocystus depilis. Over the broad area of sympatry, from southern Arizona to western Texas, both sexes of depilis are recognizable from those of mimicus by the much longer pleural hairs, up to 0.25 mm long in the females.

It is also possible that the western populations may represent a very closely related species, or, less likely, a subspecies. Before any conclusion can be reached, much additional material, with particular emphasis on the sexual forms, will have to be studied. Such material is not now available. 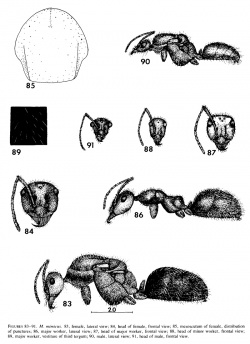 Petiole: Scale thick, weakly cuneate, summit broadly rounded, rarely distinctly wedge-shaped; crest, in frontal view, usually evenly rounded, but may be flattened or with a narrow, shallow median notch. Vestiture: Pubescence sparse to scattered on head, but often noticeable on vertex and occiput; light to moderately abundant on alitrunk; abundant on first two terga, scattered or absent on third; rarely conspicuous on third, but if so, much less dense than on second. 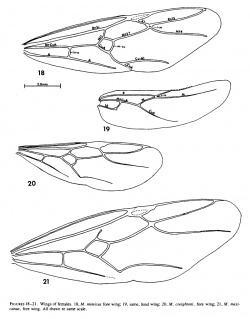 Vestiture: Pubescence very diffuse on front of head, denser on occiput and malar area, distinctly longer on malar area than elsewhere on head. On thoracic dorsum, pubescence sparse, conspicuous only on parapsis and scutellum; longer and denser on sides and propodeum. Dense on first four terga, imparting distinct sheen.

Vestiture: Pubescence everywhere sparse and inconspicuous, a little more abundant on pleurae and across base of propodeum.

Erect hairs sparse and short on head, those of occiput less than 0.5 x MOD. Scutal hairs even in length, longest less than 0.5 x MOD; scutellar hairs a little longer than those of scutum. Pleural hairs conspicuously longer, many exceeding 0.5 x MOD. Propodeum with short, erect hairs on side and across base. Petiole with short, erect hairs on crest and sides. Terga with hairs short and sparse on basal four segments, longer and more abundant on remaining; longer on sterna. Scape, femora and tibiae with numerous short, suberect to erect hairs. Forewing without fringe hairs; hind wing with fringe hairs on posterior margin.